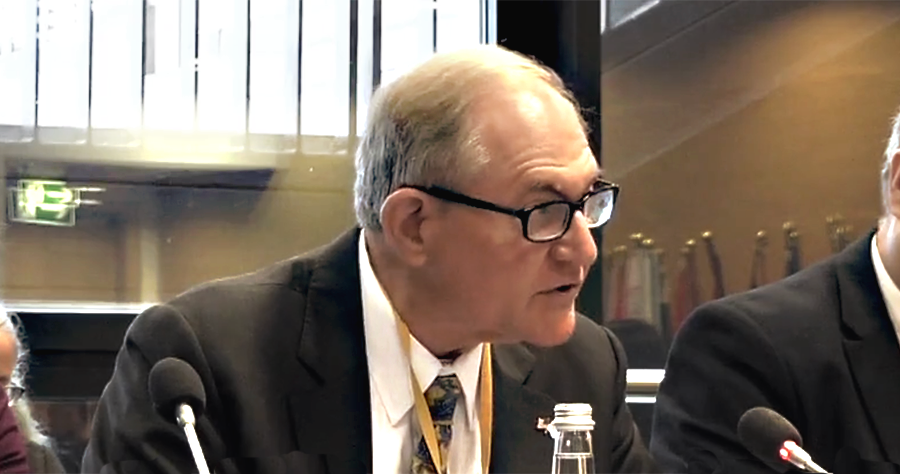 The Head of the U.S. Delegation to HDIM, USOSCE Ambassador James S. Gilmore III, delivers the U.S. statement to the working session on the Rule of Law on September 24, 2019. (Photo: OSCE)

HDIM 2019 Working Session 11:
Rule of Law II: Prevention of torture; protection of human rights and fighting terrorism; exchange of views on the question of the abolition of capital punishment

Torture and cruel, inhuman or degrading treatment or punishment are prohibited everywhere and at all times.  The United States plays a leading role in combating torture around the world, including through our strong support for civil society organizations that campaign against torture and provide assistance to victims.

The United States is committed to protecting human rights while countering terrorism and violent extremism.  Our efforts to make these commitments a reality include: generating positive alternatives for those vulnerable to violent extremism, improving law enforcement relations with local communities that may be targeted by violent extremists, and rehabilitating and reintegrating violent extremists.

We recognize participating States share the goals of countering terrorism and violent extremism, and commend the progress in certain countries in advancing these goals in ways that are consistent with respect for human rights.  We are concerned that laws against so-called “extremism” and “hate speech” are increasingly misused in some countries to unduly restrict freedom of expression, to repress political dissent, or to interfere with the exercise of the freedom of religion or belief.

In 2018 the UN Special Rapporteur on Torture stated allegations of torture and mistreatment of those in police custody in Turkey have increased since December 2016.  Also highly disturbing are allegations some doctors will not sign their names to medical reports alleging torture due to fear of reprisal.  As a result, victims are often unable to get medical documentation that could help prove their claims.  In May 2019, the Ankara Lawyers’ Bar Association reported five former Foreign Ministry staff were being tortured and mistreated in detention.  We urge Turkey to enforce its own laws and adhere to its international obligations and commitments prohibiting torture and to promote a law enforcement culture that upholds and protects human rights.

In December 2018, the United States welcomed the compelling Report of the Moscow Mechanism fact-finding mission on serious human rights violations and abuses in Russia’s Republic of Chechnya.  The Report concluded local Chechen authorities committed torture, extrajudicial killings, and other serious human rights violations against LGBTI persons and others and concluded that there is a “climate of impunity” and that the Russian government “appears to support the perpetrators rather than the victims.”  The United States has imposed sanctions under the Russia Magnitsky Act on multiple Chechen officials responsible for gross violations of human rights in Chechnya.  We will continue to target gross human rights violators with this tool.  We call on other participating States to apply similar measures to make clear those responsible and their assets are unwelcome in any country that values human rights and rule of law.

Since the publication of the Moscow Mechanism report, credible allegations of unlawful detention and torture of gay men in Chechnya in early 2019 have emerged.  Moreover, this summer, respected human rights organizations have published testimony from eyewitnesses about the killing of 27 men at a Grozny police station on January 25, 2017, a key concern addressed in the Moscow Mechanism Report.  The witnesses also attested that at least 14 other men concurrently held in the same police station were subjected to weeks of brutal torture by electric shock, beatings, and starvation.  In addition, the human rights organizations provided information indicating authorities have gone to extraordinary lengths to prevent a proper investigation of these abuses.  In light of the new information, we again call on Russia to immediately implement the recommendations in the Moscow Mechanism report and hold all those responsible to account.

Impunity for torture remains a widespread problem elsewhere in Russia as well.  In February, police in the city of Surgut are alleged to have tortured at least seven Jehovah’s Witnesses during interrogation by electric shock, suffocation, and severe beatings.  Instead of disciplining or prosecuting the perpetrators, Russian authorities promoted several of them.  Earlier this month the United States publicly designated two Russian officials responsible for these abuses.

We remain troubled by credible reports of torture and mistreatment of secular and religious prisoners in Azerbaijan, including to coerce confessions.  For example, according to the respected media outlet Caucasus Knot, on May 10 the Committee for the Protection of the Rights of Believers in Prisons reported individuals have been beaten with rubber truncheons, tortured with electric current, beaten on their heels, and hung by their legs.  We call upon the authorities to meaningfully investigate all such reports and hold accountable all those found responsible.

We recognize Uzbekistan’s efforts to address torture, including President Mirziyoyev’s signing of an anti-torture law last year, the prosecution of Colonel Nodir Turakulov for his alleged involvement in torturing journalist Bobomurod Abdullayev, and the announcement the government intends to close the notorious Jaslyk prison.  However, we note allegations authorities mistreated former prosecutor general, Rashitjon Kadirov, while in custody facing prosecution.  We urge the Uzbekistani authorities to enforce their laws against torture, hold those responsible accountable, and  close Jaslyk prison as soon as possible.

We commend the work of Kyrgyz Republic authorities and civil society actors to address allegations of torture made against law enforcement agencies.  We urge authorities to further these efforts by immediately investigating claims of torture while physical evidence is still available, prosecuting those responsible in a timely manner, and training law enforcement personnel on interrogation techniques to avoid torture and other forms of cruel, inhuman or degrading treatment.

The June 2018 report on Tajikistan by the U.N. Committee against Torture noted “allegations that torture and ill-treatment continue to be routinely practiced by law enforcement officials in the State party.” We call for a transparent investigation into three riots this year that reportedly resulted in the deaths of multiple prisoners.  We are concerned by the forced repatriation of Sharofiddin Gadoev from Russia to Tajikistan in February. While Gadoev ultimately was released, he alleges he was tortured during his detention and his case highlights a troubling instance of authorities targeting political opponents abroad.

We welcome Kazakhstani President Tokayev’s demand for a thorough investigation into the allegations of torture of prisoners in Zarechny. We hope this is part of a larger effort to ensure prison officials understand that torture is unacceptable.

We reiterate our call for Turkmenistan to account for all prisoners who have “disappeared” into the prison system, some of whom have not been heard from for many years. Their families deserve to know their whereabouts and condition. We also urge the government to address the conditions in these prisons which are rife with human rights abuses.

The American people, both at the federal level and in the majority of our individual states, acting through their freely elected representatives, have enacted laws authorizing the death penalty for the most serious crimes.

The death penalty is only imposed after a defendant is afforded all the due process provided by U.S. law, including the right to be tried by a jury of his or her peers, and the right to effective assistance of counsel.  In federal cases, heightened procedural safeguards include the appointment of two attorneys, at least one of whom must be “learned in the law applicable to capital cases.”  Because the United States upholds the rule of law, we owe it to the victims and their families to carry forward the sentence imposed by our justice system.

We emphasize any application of existing death penalty laws must, and will, be consistent with U.S. Constitutional requirements and is thus consistent with our international obligations.  The U.S. judicial system provides an exhaustive system of protections at both the federal and state levels to ensure the death penalty is not applied in a summary, arbitrary or discriminatory manner, and its implementation is undertaken with exacting procedural safeguards, after multiple layers of judicial review, in conformity with the U.S. Constitution and U.S. international obligations.

We believe greater focus is needed on addressing and strengthening compliance with existing international obligations regarding application of the death penalty.  The United States urges all States to address and prevent human rights violations that may result from the improper imposition and application of capital punishment.