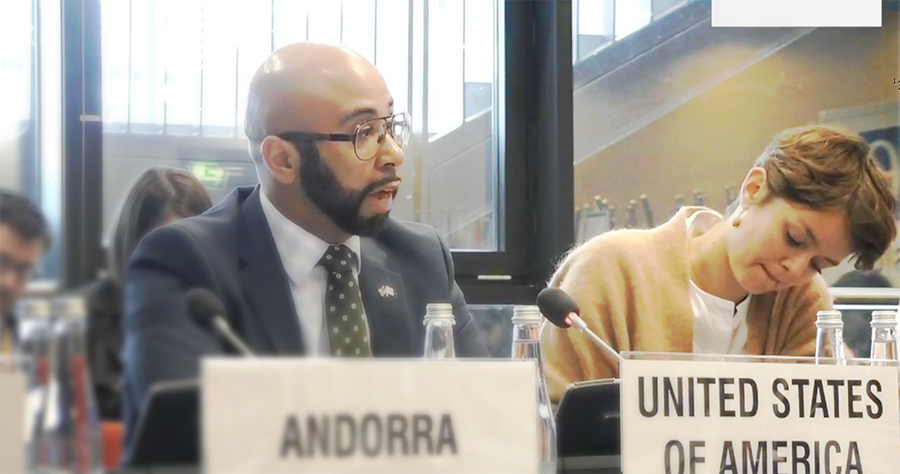 HDIM 2019 Working Session 6: Freedom of Peaceful Assembly and of Expression

The Russian Federation treats the freedoms of association and peaceful assembly as threats rather than human rights. The mass detentions of thousands who assembled peacefully in Moscow this summer, excessive use of force against protestors, and spurious criminal charges brought against some of those detained all appear aimed at thwarting future demonstrations. Russia’s 2015 “undesirable organizations law” unduly restricts freedom of association; we call for Moscow release of Anastasia Shevchenko, the first person charged under this law.

Freedom of assembly is restricted in Russia-occupied Crimea, with onerous laws imposed to prevent gatherings and demonstrations. The arrest of 23 civic activists associated with the Crimean Solidarity network earlier this year marks a disturbing escalation in the repression of Crimean Tatars.

In Belarus, authorities repeatedly have denied registration, both as a political party and as an association, to the Belarusian Christian Democrats.

The government in Hungary increased legal limitations on assembly in 2018, including on the location, timing, and content of demonstrations. Additional laws increased restrictions on NGOs working on migration issues. We echo international concerns that these laws create opportunities for abuse through politically motivated limitations on freedoms of peaceful assembly and association.

In Georgia, we call on the government to ensure the credibility and independence of the investigation into incidents of excessive use of force against demonstrators on June 20, including the use of rubber bullets.

In Turkey, the government has closed more than 1,500 associations or foundations since the July 2016 failed coup attempt. We regret the continued use of terrorism charges to dissolve and prosecute NGOs or associations who do not advocate for or engage in violence. While we acknowledge the very real security threats faced by Turkey, these closures, in addition to prohibitions on workers’ strikes, restrict the right to freedom of association. The United States welcomes the Turkish court decision in April declaring unlawful an indefinite ban on events that support the human rights of LGBTI persons in Ankara. However, we remain troubled that the Ankara ban remains in effect de facto, and that similar bans in Istanbul and Izmir have preceded violent police interventions at otherwise peaceful gatherings.

Authorities in Azerbaijan continue to restrict freedom of association through a variety of means, including criminal investigations into legitimate activities of independent organizations, freezing bank accounts, and imposing undue limitations on NGO registration. No rallies have been permitted since a well-attended peaceful demonstration on January 19 in support of the release of political prisoners.

The United States was deeply concerned by the detention of thousands of demonstrators around the June presidential election in Kazakhstan. The suppression of peaceful assembly in the weeks before and after the vote contradicts Kazakhstan’s OSCE commitments. Burdensome regulations severely restrict the freedom of Kazakhstanis to form associations and assemble peacefully. Human rights advocates decry as politically-motivated the criminal prosecution and harassment of labor leaders, such as Larisa Kharkova, in violation of international obligations to respect freedom of association.

There are obstacles to NGO registration and reports of harassment and arbitrary surveillance of human rights activists in Uzbekistan despite a 2018 presidential decree easing civil society restrictions. Despite an improved legal framework protecting freedom of association and trade unions, lack of implementation of the new laws has prevented workers from exercising their right to form and join unions. Uzbekistan still lacks any independent labor unions. The draft Law on Rallies, Assemblies, and Demonstrations, if enacted, would place undue restrictions on civil society organizations. We urge Uzbekistan to consult with civil society regarding all aspects of the draft law.

There also are credible allegations of harassment and arbitrary surveillance of activists in Kyrgyzstan. The United States calls on the Kyrgyz government to suspend consideration of a draft trade union law that would impinge upon the independence of trade associations. We urge the government to consult with Kyrgyzstani trade organizations and international institutions to ensure the law is in accord with Kyrgyzstan’s international obligations and commitments.

We urge the government of Tajikistan to address the concerns of civil society groups regarding the proposed law on Non-commercial Organizations. If adopted, this law would place undue restrictions on civil society by making the registration process more complex for foundations and institutions, especially those receiving foreign grants. The law would also grant excessively broad powers to monitor the activities of noncommercial organizations. This would further shrink the space for civil society to operate in the country. We are concerned by the harsh repression of opposition parties, especially the Islamic Renaissance Party of Tajikistan (IRPT). There are credible allegations of mistreatment of Mahmadali Hayit, a former deputy IRPT leader, who is serving a life sentence after the government accused IRPT members of initiating a failed coup led by former Deputy Defense Minister Abduhalim Nazarzoda. We urge authorities to investigate the allegations of mistreatment and hold those responsible to account.

In Turkmenistan, restrictions on human rights and fundamental freedoms are so severe that protests, independent assemblies, and civil society activity are virtually non-existent.

The United States acknowledges the Polish government’s recent condemnation of violence at an LGBTI march in Poland and urges Polish officials to provide protection to those seeking to exercise their right to peaceful assembly.

In Sarajevo this month, people of all backgrounds marched together to reject fear and hate and to proclaim the equal human rights of everyone during Bosnia and Herzegovina’s first Pride march. We congratulate the Organizing Committee, March participants, local institutions, and citizens of BiH on successfully holding a peaceful first Pride March.

In Ukraine, while we commend police protection of the LGBTI pride march in Kyiv, we urge the new government to takes steps to end impunity for recent violent attacks on gatherings of LGBTI persons, human rights defenders, and others.

The United States values the essential contributions of human rights defenders and representatives of non-governmental organizations to the OSCE and, in particular, to the Human Dimension of security. We oppose any efforts to reduce or unduly impede civil society access to and participation in the HDIM and other OSCE events. We welcome the 2019 OSCE Parliamentary Assembly’s Luxembourg Declaration, which calls on participating States to “maintain and build upon existing practices and precedents relating to the participation of non-government organizations in meeting and seminars organized under OSCE auspices and particularly those in the Human Dimension, and reject efforts to restrict their participation.” The United States urges all participating States to consider the concrete recommendations in this resolution to recognize, preserve, and advance the vital role of civil society in our societies, at the OSCE, and in our shared region.