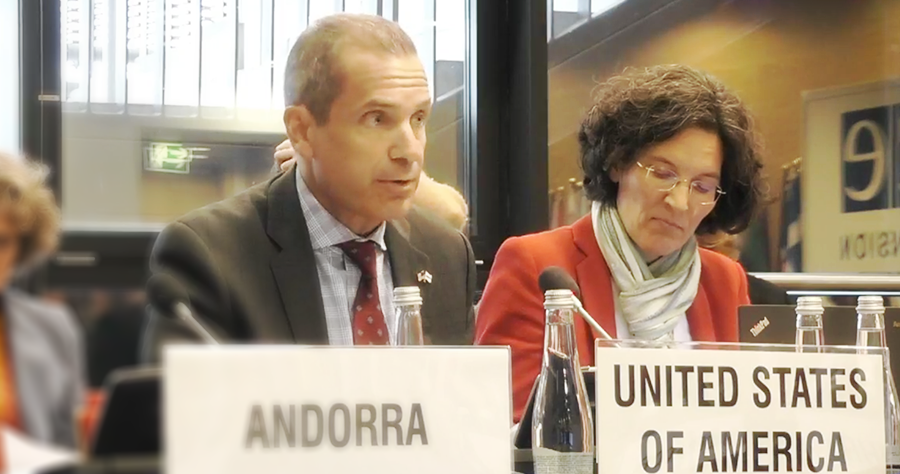 Respect for freedom of thought, conscience, religion or belief is enshrined in the foundational principles of the Helsinki Final Act and is an international legal obligation of almost all OSCE participating States. The United States highlighted the importance of religious freedom at Secretary Pompeo’s Ministerial Meeting in July, the largest-ever human rights conference hosted at the Department of State, which was attended by more than 105 government and international organization delegations and over 1,000 civil society representatives and faith leaders. In many countries across the globe, including some in the OSCE region, individuals and members of religious communities are denied the right to freely profess and practice their religion or belief. Together with likeminded partners, the United States is launching an International Religious Freedom Alliance to promote and defend this human right.

We welcome steps that Uzbekistan has taken to promote freedom of religion or belief, including its registration of four churches in the past year compared to none in the prior eight years as well as its release of prisoners held because of their beliefs. The United States had designated Uzbekistan as a Country of Particular Concern from 2006 to 2017, but upgraded it to a Special Watch List in 2018 after the Secretary of State determined the government had made substantial progress in improving respect for religious freedom. However, approximately one thousand individuals remain in detention in Uzbekistan for reasons of thought, conscience, religion or belief. Laws restrict public speech or proselytism and possession of religious materials at home. A dress code issued by the Ministry of Education prohibits the wearing of religious garments and symbols in schools. We urge authorities to register additional religious congregations that have pending applications and review the draft religion law with ODIHR so that it may assist in institutionalizing recent policy reforms and ensure that all laws and practices are consistent with international obligations and OSCE commitments.

Turkmenistan surveils, detains, and imprisons people for alleged violations of the country’s religion laws. Authorities provide no alternatives to mandatory military service and imprison conscientious objectors, including 10 Jehovah’s Witnesses at this time. Authorities enforce restrictions on religious literature, religious gatherings, and purchase or sale of land or buildings for religious purposes. Tajikistan regulates the practice of religion, including by setting strict parameters on the practice of Islam, limiting the ability of minority religious organizations to register and operate, and restricting women and youth participation in religious activities. The government also places onerous limitations on the publication or importation of religious literature. Tajikistan authorities have carried out raids and interrogations against of members of religious groups. The United States designates Turkmenistan and Tajikistan as Countries of Particular Concern for having engaged in particularly severe violations of religious freedom.

The Russian Federation’s prosecution of members of religious minorities under anti-extremism and counter-terrorism laws is intensifying. Following the Supreme Court’s 2017 ruling classifying Jehovah’s Witnesses as an “extremist organization,” authorities have opened approximately 200 criminal extremism investigations against individuals and imprisoned more than 50 Jehovah’s Witnesses. Approximately 5000 adherents have fled the country. In May, a court sentenced Jehovah’s Witness Denis Christensen to 6 years in prison simply for practicing his faith. In February, authorities in Surgut reportedly tortured at least seven Jehovah’s Witnesses with beatings, suffocation, and electric shocks during an interrogation in Surgut. The human rights NGO Memorial reported 244 cases of persons imprisoned for their religious belief in Russia as of August 2019 – more than triple the number from 2017. Most of those imprisoned are Muslims. In 2018, the United States for the first time placed Russia on a Special Watch List for severe violations of religious freedom. Authorities in Russia-occupied Crimea and Russian-controlled areas of eastern Ukraine targeted for repression members of minority religious congregations, such as Jehovah’s Witnesses, Orthodox Church of Ukraine adherents, and Muslim Crimean Tatars.

We urge Turkey to follow through on President Erdogan’s pledge in early 2018 to confer formal recognition on Alevi places of worship. We call on the government to fulfill its numerous past commitments to reopen the Halki Seminary, closed now for nearly 50 years. And we encourage Turkey to work with religious communities to address unduly restrictive regulations.

The United States is also concerned about increasing restrictions on religious attire and symbols across the OSCE region. In Austria, Belgium, Bulgaria, Denmark, France, Germany, Italy, the Netherlands, Russia, Spain, and Switzerland, some local or national authorities have adopted measures that infringe on freedoms of religion or belief and expression through choice of attire. In July, the Canadian province of Quebec became the first jurisdiction in North America to impose restrictions on some religious attire.