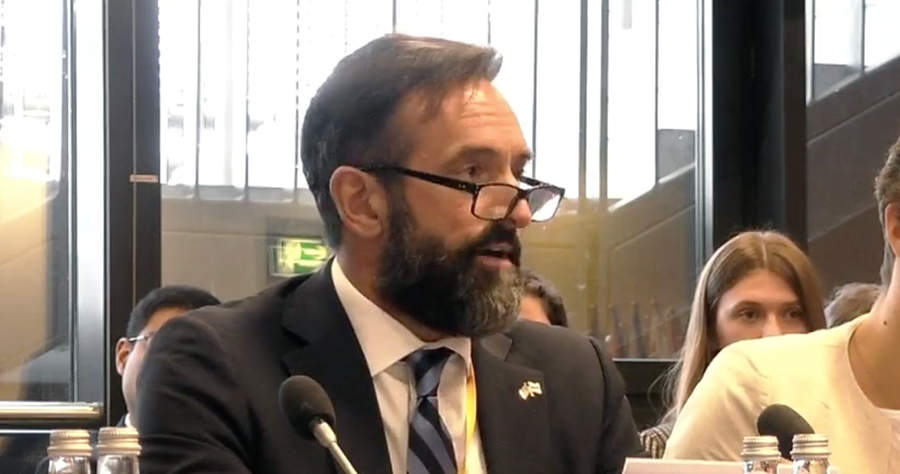 HDIM 2019 Working Session 9: Humanitarian issues and other commitments, including combating trafficking in human beings, refugees and displaced persons, persons at risk of displacement

The United States is committed to tackling the multi-dimensional threats faced by trafficking victims, refugees, and forcibly displaced persons.  The OSCE can improve its collaborative approach to addressing these threats by partnering with participating States, non-governmental organizations, civil society, trade unions, and the business community.

The International Labor Organization (ILO) estimates that of the 40.3 million victims of human trafficking worldwide, 81% are trapped in forced labor.  The U.S. Department of Labor’s most recent List of Goods Produced by Child Labor or Forced Labor documents 148 goods from 76 countries.

The eradication of global human trafficking must be a multilateral and cross-sectoral effort.  We note recent OSCE capacity-building initiatives with governments and other stakeholders to address trafficking in Central Asia, North Macedonia, Greece, and Bulgaria.  The OSCE Program Office in Nur-Sultan, Kazakhstan hosted the first Russian-language simulation-based exercise on combating human trafficking along migration routes.  Participants included 58 civil society and law enforcement representatives from 14 OSCE participating States and Partners, who responded to human trafficking scenarios reconstructed by actors.

On January 8th, 2019, Congress passed the Frederick Douglass Trafficking Victims Prevention and Protection Reauthorization Act of 2018, which reauthorized the United States’ whole-of-government response to fight human trafficking at home and abroad for another four years, including by holding traffickers accountable, protecting survivors, and preventing human trafficking such as in foreign missions and diplomatic households.

Recent reports from the Internal Displacement Monitoring Centre have recorded 41.3 million people around the world experiencing internal displacement due to conflict and violence, the highest figure ever, with many of these individuals displaced within the OSCE region.  As emphasized by the Group of Friends of Georgia at the Milan Ministerial Council, the Russian Federation’s occupation of Georgia’s Abkhazia and South Ossetia regions has internally displaced over 280,000 Georgian citizens.  Five years of Russian aggression in eastern Ukraine has resulted in more than 1.4 million internally displaced persons, and at least 30,000 people fled Russia’s occupation of Ukraine’s Crimean peninsula, many of whom are Crimean Tatars.

We are also concerned about how the human rights crisis in China’s Xinjiang Uighur Autonomous Region is forcing members of Chinese Muslim minority groups to seek protection in some OSCE Participating States.  We urge all governments to carefully consider requests from asylum seekers affected by China’s repressive campaign and to ensure respect of the non-refoulement principle. In Kazakhstan, individuals who entered the country illegally are not eligible to seek asylum under Kazakhstani law.  We urge the Kazakhstanis to revise their law, in keeping with their obligations under the UN Convention relating to the Status of Refugees, its Protocol, and the Convention against Torture and Other Cruel, Inhuman or Degrading Treatment or Punishment.

The UNCHR found 70.8 million forcibly displaced people worldwide, with the top refugee-hosting countries in the OSCE region being Turkey, which hosted 4 million and Germany, which hosted 1.1 million.  There are also significant displaced populations in OSCE Partner States such as Jordan.  We commend Turkey and the Turkish people for hosting and providing comprehensive services for such a large number of refugees and other displaced persons.

Participating States have adopted numerous OSCE commitments that support providing humanitarian assistance to refugees.  The United States notes the efforts of several participating States to work with the UNHCR and other stakeholders on a “solidarity mechanism” to assist in the resettlement of refugees.  Such commitments exemplify the OSCE Borders Security and Management Concept of the 2005 Ljublijana Ministerial, which calls on participating States to “promote co-operation between their border services, customs authorities, agencies issuing travel documents and visas, and law enforcement and migration agencies, as well as other competent national structures.”

We are concerned by violence and hate crimes committed against refugees and migrants throughout the region.  These populations are vulnerable to labor exploitation, particularly in informal sectors such as construction, food service, and domestic servitude.  Refugees and migrants also often lack access to effective legal remedies to address grievances related to unpaid wages, excessive working hours, physical abuse and poor living conditions.