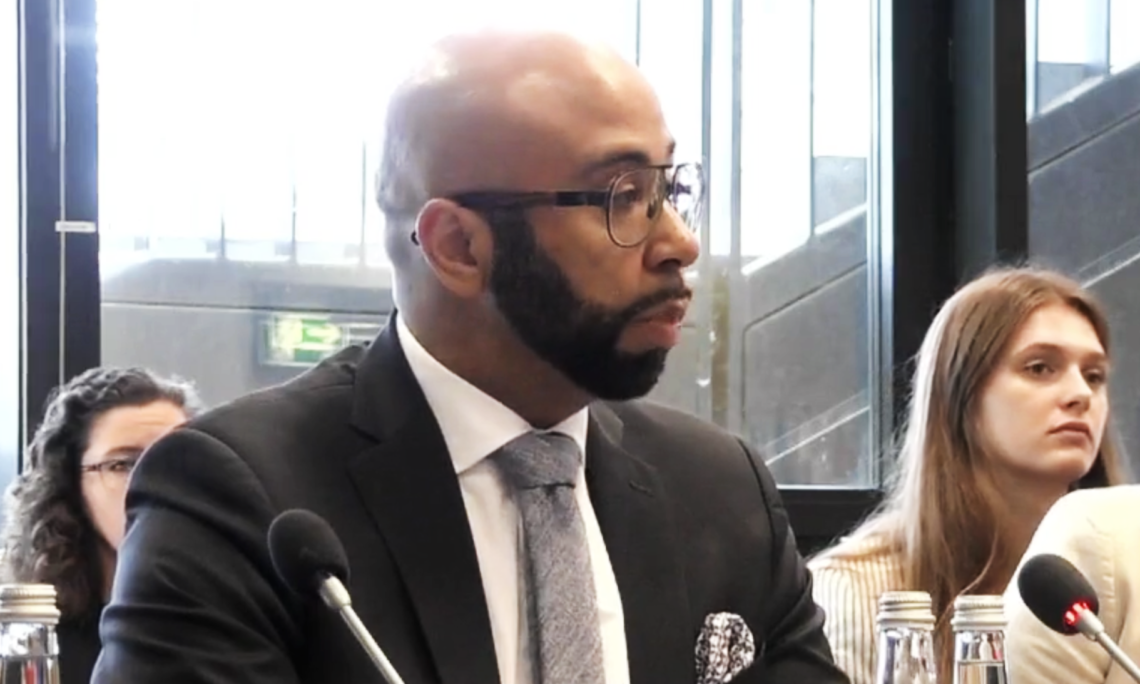 Alex Johnson of the U.S. Helsinki Commission delivers the U.S. statement at a Working Session on Tolerance and Non-discrimination on September 20, 2019. (Photo/OSCE)

In June, the United States reaffirmed our commitment to advancing gender equality and empowering women and girls through the release of the U.S. Strategy on Women, Peace, and Security. The Strategy focuses on increasing women’s participation in political, civic, and security endeavors to prevent and resolve conflicts and on creating conditions for long-term peace around the world. The Strategy aims to ensure women are no longer absent from or overlooked at the negotiating table, and it modernizes international programs to improve equality and empower women. We look forward to working with our OSCE partners to advance the Strategy and our shared objectives.

In February, the United States launched the Women’s Global Development and Prosperity Initiative, which seeks to empower women worldwide to fully participate in their economies, enhancing prosperity, stability, and security.

Last year in Milan, participating States adopted a Ministerial Decision on Preventing and Combating Violence Against Women. That decision noted that “violence against women and girls takes many forms, which can include: domestic violence, sexual violence, harmful practices, trafficking in human beings, sexual and other types of exploitation, and sexual harassment.”

No country can afford to have women blocked from advancing in the workplace because of gender-based discrimination and sexual harassment. Azerbaijan and Belarus have extensive lists of banned jobs that women are unable to occupy, limiting their participation in the economy through legally supported discrimination. Kazakhstan, Tajikistan, Turkmenistan, Armenia, and Belarus still lack specific laws against sexual harassment, including in the workplace.

We are alarmed by the results of a study conducted earlier this year on sexual harassment within the OSCE as an organization. It is imperative that the OSCE get its own house in order as it seeks to promote gender equality elsewhere. This pertains to regular and field mission OSCE staff, as well as short-term mission members, including election observers. There must be zero-tolerance, full accountability, and appropriate consequences for sexual harassment within the OSCE. There also must be a clear mechanism to protect victims from retaliation.

The United States also urges all participating States to redouble their efforts to strengthen and implement laws aimed at preventing gender-based violence.

We are concerned that protections against intimate partner violence have been weakened in Russia. NGOs note that Russian Ministry of Internal Affairs statistics indicate that approximately 12,000 women die annually from domestic violence in Russia. A 2017 Russian law made battery by “close relatives” an administrative rather than a criminal offense for first-time offenders, provided the beating does not cause serious harm requiring hospital treatment. An October 2018 report by the NGO Human Rights Watch noted this decriminalization fosters a sense of impunity among abusers, weakens protections for victims, and creates procedural obstacles to prosecuting domestic violence.

Although Azerbaijan has a law against domestic violence, a lack of clear implementing guidelines has reduced its effectiveness.

Georgia has made progress in its legislation and policies to address intimate partner violence, including by adopting amendments enabling courts to take away the right to carry firearms from persons convicted of domestic violence. Georgia designates specialized prosecutors to handle such offences, and has created a risk assessment tool for police officers responding to such incidents.

The United States welcomes Uzbekistan’s presidential resolution in 2018 to prevent domestic violence and the new law passed by the Parliament on August 23 protecting women from violence. The new law aims to strengthen safeguards for women from harassment and violence in the home, in the workplace, and in educational institutions, as well as to guarantee the legal and social protection of victims of harassment and violence. We encourage the government of Uzbekistan to avail itself of OSCE assistance on the issue as needed.

We are concerned about bride kidnapping in the Kyrgyz Republic. In 2017, the OSCE estimated that each year 12,000 young women were kidnapped into forced marriages and 20 percent were raped in the process. It has been more than one year since 20-year-old Burulai Turdaaly Kyzy was kidnapped and later stabbed by her abductor in a police station. While those responsible for her death have been held accountable, more must be done to prevent future occurrences of such heinous crimes. Men who kidnap brides are more likely to perpetrate domestic abuse and limit their spouses’ pursuit of education and employment.

There has been much debate and many studies conducted on the effects of legalizing or decriminalizing prostitution. The United States opposes prostitution and any related activities, including pimping, pandering, or maintaining brothels as contributing to the phenomenon of sex trafficking and as inherently harmful and dehumanizing. Prostitution all too often involves women from minority groups suffering from a lack of access to economic and educational opportunities.