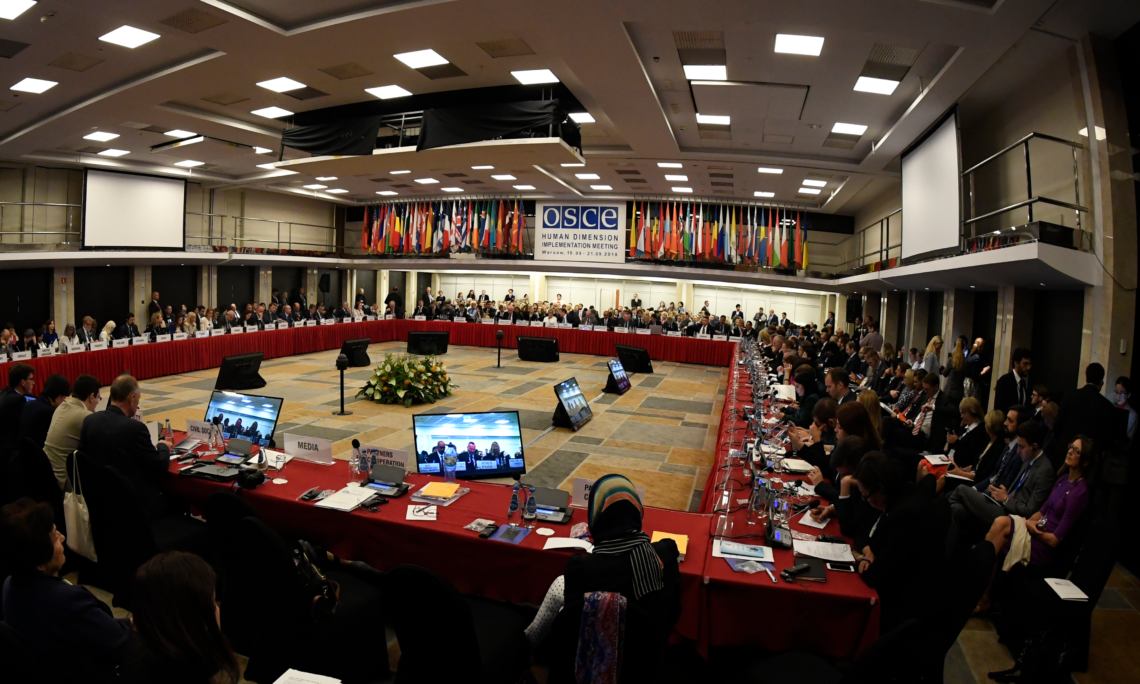 As prepared for delivery by Deputy Assistant Secretary of State Michael Murphy
to the 2018 Human Dimension Implementation Meeting, Warsaw
September 21, 2018

As we look toward the Milan Ministerial, the United States will focus on defending and advancing Helsinki Final Act Principles and the OSCE’s comprehensive approach to security.

The Russian Federation has caused large-scale civilian death, displacement, and destruction in eastern Ukraine and relentlessly abuses Crimean Tatars, ethnic Ukrainians, and others who oppose the occupation in Crimea. Nothing Russia or its GONGOs has said at HDIM changes these facts or its culpability. Today is the 131st day of Ukrainian filmmaker Oleh Sentsov’s hunger strike to seek the release of his compatriots held by Russia. Among them is Volydymyr Balukh, who, according to credible reports, was imprisoned on trumped-up charges just because he flew a Ukrainian flag. We again call on Russia to release all unjustly held Ukrainian prisoners.

The United States joins our European and other partners in reaffirming that our sanctions against Russia will remain in place until Moscow fully implements its Minsk commitments and returns full control of the Crimean peninsula to Ukraine. U.S. support for Ukraine’s sovereignty and territorial integrity remains unwavering. Likewise, Abkhazia and South Ossetia remain integral parts of Georgia despite Russia’s continuing occupation. The United States supports Georgia’s sovereignty, independence, and territorial integrity within its internationally recognized borders.

While Russia has been a constructive participant in the 5+2 Transnistria settlement negotiations, it has not lived up to its commitment to remove its forces from Moldova, consistent with its 1999 Istanbul OSCE Summit commitments.

The United States is also concerned about Russia’s internal repression. Impunity is rampant for threats and violence against human rights defenders, journalists, environmental activists, political rivals, ethnic and religious minorities, and those who do not conform to so-called “traditional values.” Russian authorities arrested some 1,000 peaceful demonstrators across Russia on September 9. The use of excessive force against peaceful protestors violates freedoms of expression and peaceful assembly under Russia’s Constitution and international law.

Moscow is failing to stop the lethal lawlessness and violation of human rights in the Republic of Chechnya. The United States will confer with the other 14 invoking countries about next steps following our invocation of the OSCE’s Vienna Mechanism.

We are troubled by the news yesterday‎ that in the baseless drug possession case against Chechen human rights defender Oyub Titiyev, the judge ruled to close the trial to public observers. The eyes of the international community remain on this case and on the human rights situation in Chechnya. We again call for his release.

The United States is concerned about restrictions on human rights in other participating States as well. We call on Turkey to stop using Pastor Brunson, other detained U.S. citizens, and our locally employed staff as bargaining chips. All those being held by Turkey, Russia, Azerbaijan, and other OSCE participating States for exercising their fundamental freedoms or for other politically motivated reasons must be released.

Despite assurances from high-ranking Serbian officials, there is still no accountability for the murders of the Bytyqi brothers.

We welcome Tajikistan’s participation this year. We are concerned, however, that some Tajik civil society representatives chose not to attend because they were reportedly threatened by authorities and that family members of those who participated were interrogated. We call on the Tajik government to cease these reprisals.

We are encouraged by the transition in Armenia and the reform process launched in Uzbekistan. We look forward to seeing steady and concrete progress, and we believe that OSCE can assist in these efforts.

As stated in the 2004 Berlin Document, anti-Semitism and other forms of intolerance “pose a threat to democracy, to the values of civilization, and to overall security.” Hate crimes must be condemned, investigated, and prosecuted. ODIHR’s “Words into Action” program has helped communities combat anti-Semitism and should be continued. Complementary programs could be adapted from it to address other manifestations of prejudice.

We support OSCE institutions, Field Missions, and the Chairmanship’s Special Representatives, and we will defend their independence, mandates, and budgets.

HDIM’s great value is that it provides a regional platform for honest, rigorous, open debate. This does not constitute interference in internal affairs. As we all reaffirmed at Astana, Human Dimension commitments “are matters of direct and legitimate concern to all participating States and do not belong exclusively to the internal affairs of the state concerned.” No government secure in its democratic legitimacy would be frightened by efforts, whether domestic or international, to expose abuses. U.S. positions have at times been criticized here by fellow States and civil society members. We might not agree with the criticism, but we try to respond in a meaningful way because we take our commitments seriously. We also propose eliminating the practice of using Introducers, so that States and civil society have more time to engage. The experts who now serve as Introducers would be outstanding speakers at side-events.

We continue to object to the content-based restrictions in ODIHR’s Code of Conduct for this meeting. One doesn’t have to agree with what a government or an NGO says in order to defend the right to say it. Although the moderators were restrained in their implementation of the Code at this year’s HDIM, we believe its content-based prohibitions are inappropriate and should be eliminated. Arguments should be challenged, not prohibited.

We oppose attempts by States to reduce or unduly restrict civil society access to HDIM and other OSCE proceedings. Attempts to flood these proceedings with GONGOs in order to crowd out authentic voices are counterproductive.

The United States is grateful to the courageous civil society activists who have enriched our discussions. We value your role in holding governments accountable. Your first-hand insights and personal stories inspire us throughout the year. We have listened carefully to your recommendations — and those of other governments — and have attended your side events. We will take to the Ministerial in Milan the ideas that can best improve the implementation of OSCE commitments.

I thank Director Gisladottir and her team for organizing this meeting and the people and government of Poland for hosting us.