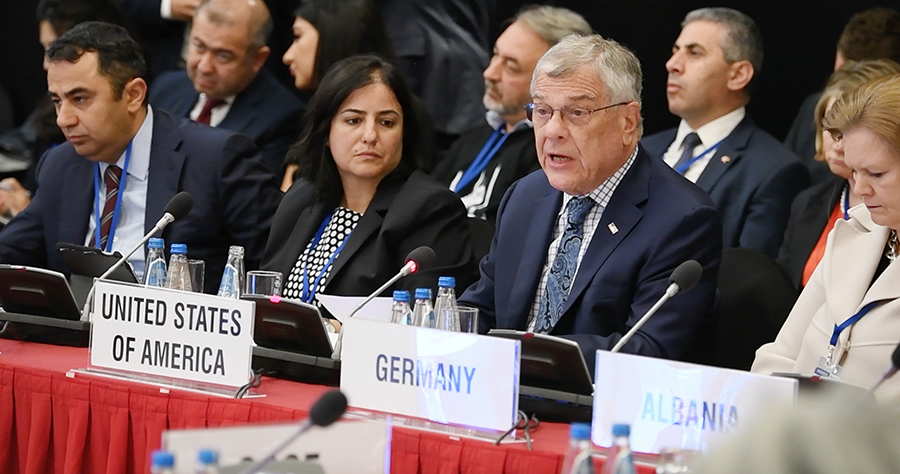 As prepared for delivery by Ambassador Michael Kozak, Head of Delegation
to the 2018 Human Dimension Implementation Meeting, Warsaw
September 10, 2018

In our Closing Statement at last year’s meeting, the United States delegation called for the release of filmmaker Oleh Sentsov and other Ukrainian citizens held by the Russian Federation due to their peaceful opposition to Russia’s occupation of Crimea and aggression in eastern Ukraine.

As we open the 2018 HDIM, Mr. Sentsov is in perilous health on the 120th day of his hunger strike to protest Russia’s unlawful imprisonment of over 60 of his fellow countrymen. We call on Russia to release these prisoners. We are alarmed about the prospect of another innocent person dying in Russian custody.

The Helsinki Final Act’s ten foundational principles link security among states to respect for human rights within states. Russia’s ongoing aggression against Ukraine contravenes all ten Principles, including the inviolability of frontiers and the territorial integrity of states. Mr. Sentsov and his imprisoned Ukrainian countrymen are flesh and blood embodiments of the connection between Russia’s breaches of international security and its abuse of human rights.

The conflict in Ukraine that Russia ignited and continues to stoke constitutes the worst security crisis in Europe since the 1990s. Its cruelest costs can be counted in human lives: nearly two million driven from their homes; more than 10,000 dead. In Russia-controlled parts of eastern Ukraine, those considered to have pro-Ukrainian sympathies are subject to imprisonment, torture, and extrajudicial killings. The humanitarian situation along the line of contact is dire. In Crimea, occupation authorities harass and prosecute Crimean Tatars and other Ukrainian citizens who dare to oppose Russian rule.

Russia’s violations of the sovereignty and territorial integrity of another state are by no means confined to Ukraine. Russia continues to occupy 20 percent of Georgia and to support separatism in the Transnistrian region of Moldova. These interventions carry serious humanitarian consequences. Meanwhile, throughout the OSCE region and the world, Russia engages in malign influence and disinformation campaigns to undermine elections processes and destroy faith in democratic government.

It is no coincidence that Moscow’s actions in contempt of the rules-based international order are accompanied by attacks on the rule of law at home. Since the last HDIM, the Russian government has continued using its so-called “foreign agents law” to justify a constant stream of raids, fines, harassment, and legal proceedings that obstruct the work of Russian non-governmental organizations, including the Levada Center that does polling and Ecodefense Women’s Council. The government’s list of banned “undesirable foreign organizations” keeps getting longer and now contains 14 international organizations promoting rule of law and democracy. Opposition figures, independent journalists and civil society organizations, such as the respected human rights organization Memorial, are threatened and physically assaulted, all too often with impunity.

Nowhere in the Russian Federation is lawlessness more lethal and impunity more implacable than in Ramzan Kadyrov’s Republic of Chechnya. On August 30, the United States joined 14 other participating States in invoking the OSCE’s Vienna Mechanism, requiring Russia to provide a serious response to reports of appalling abuses by Chechen authorities against persons for their perceived or actual sexual orientation or gender identity, as well as against human rights defenders, lawyers, and members of independent media and civil society organizations. We look forward to receiving a substantive response.

During the course of this HDIM, the United States delegation will discuss in more detail these and other concerns about human rights conditions in the OSCE region: the shrinking space for civil society and persecution of human rights defenders; the increasing restrictions on media freedom and impunity for violence against journalists; the wielding of anti-terrorism laws as political weapons against dissenters and peaceful members of ethnic and religious groups; threats to democracy and the dangers of unchecked hatred.

I will now briefly mention two areas of concern that illustrate the connections between security and human rights:

Tomorrow marks the anniversary of the September 11, 2001 terrorist attacks. My government and the American people share the agony of all countries that have suffered grievously from terrorist violence. The United States’ commitment to eradicating terrorism and violent extremism remains resolute. We welcome equally determined partners in that global effort. But we regard it as counterproductive – indeed antithetical – to that effort when governments commit human rights violations in the name of countering terrorism and violent extremism. Respect for human rights and fundamental freedoms empowers those in society who can help address drivers of violent extremism and steer youth away from the path of radicalization to violence. Conversely, when governments do not respect human rights, they foster grievances that terrorists can exploit. Governments that treat peaceful dissent as a threat do not strengthen security, they undermine it.

While we recognize the security challenges Turkey faces, human rights need to be respected. Since the 2016 coup attempt, a succession of emergency decrees, restrictive constitutional amendments, combined with the vague interpretation and broad application of new counter-terrorism laws, have severely undermined the rule of law. Over 50,000 citizens — including hundreds of journalists, writers, editors, publishers, translators, rights activists, lawyers, students and elected officials — are being held on grounds that appear to be politically motivated. All those who have been detained for exercising their fundamental freedoms must be released. We again call on the Turkish government to immediately free Pastor Andrew Brunson, the other U.S. citizens it has detained, and our locally employed staff. The government of Turkey knows full well that it has no legitimate reason to hold them and is using them as pawns.

Madam Chair: Across our region, including in my own country, violent extremist groups espouse messages and agendas that are reminiscent of the Holocaust era. In Berlin in 2004, the participating States recognized that anti-Semitism and other forms of intolerance “pose a threat to democracy, the values of civilization and, therefore, to overall security in the OSCE region and beyond.” That was not hyperbole. Unchecked hate led to the ultimate horror of the Holocaust. In the decades since, in this very region and elsewhere in the world, we have seen how flames of hate can be fanned into ethnic cleansing, mass murder, genocide, and destruction on a terrible scale.

Last year’s HDIM came shortly after the shocking violence in Charlottesville, Virginia. The United States pledged that the fullest force of the law would be brought against those responsible, and that has been done. This June, when the United States brought formal hate crime charges against a rally participant for driving his car into a crowd of counter protesters, killing a young woman named Heather Heyer and injuring many others, Attorney General Jeff Sessions said: “Today’s indictment should send a clear message to every would-be criminal in America that we aggressively prosecute violent crimes of hate that threaten the core principles of our nation.”

There is never any justification for anti-Semitism, for anti-Muslim and anti-Christian discrimination, for anti-Roma and other racist sentiment. LGBTI individuals, migrants, persons with disabilities — all have human rights that must be protected. There can be no room for hate crimes against anyone, anywhere, for any reason.

The United States remains committed to working with the OSCE, governments, businesses, faith communities, and civil society groups across the region to condemn hatred and promote respect for the human rights of everyone.

For all the trends of concern in our region since the last HDIM, I will mention two countries where the direction is encouraging:

We commend the people of Armenia and its political leadership for the peaceful government transition. We look forward to seeing reforms to bolster checks and balances, including judicial independence, which is essential to the rule of law.

In Uzbekistan, President Mirziyoyev has embarked upon ambitious reforms to improve the human rights situation in his country. There is more to be done to institutionalize these changes, including adopting new legislation to match the intent of the reform agenda and making determined efforts to address gaps between new laws and their local implementation. The reforms have created the conditions for increased cooperation between our two nations. As the reforms progress, they will contribute to the security and prosperity of Central Asia as a whole.

The Office for Democratic Institutions and Human Rights (ODIHR) and OSCE’s other expert structures can play important roles in assisting both countries along their chosen paths of peaceful, rights-respecting change.

Madam Chair: Here at HDIM, as always, the United States will continue to staunchly defend the independence, mandates, and budgets of OSCE institutions and to ensure that civil society participation in HDIM and other OSCE proceedings is not unduly restricted.

To that end, the United States must object to certain provisions of the Code of Conduct promulgated by ODIHR. A number of the provisions amount to content-based restrictions on the participation of civil society. We need not—and do not—agree with all of the ideas espoused here to defend the right of civil society to participate. When we disagree with the ideas presented, we should respond with alternative viewpoints, not censorship. We are disappointed that the Code of Conduct appears to formalize the latter approach. It should be revised.

My delegation looks forward to a lively, wide-ranging exchange of views and ideas with governments and civil society representatives alike. We thank Poland for graciously hosting this annual gathering and ODIHR for organizing it.

In conclusion, I wish to express the United States’ deep appreciation to the human rights defenders who have come here to HDIM from across the OSCE region. We know that some of you have done so at considerable risk to yourselves and your families. We hold in the highest respect all those who serve and sacrifice for the sake of human rights. Human rights defenders remain the heartbeat of the Helsinki process.

Oleh Sentsov’s heart still beats. Those who have the power to release him must act now, while there is still time.