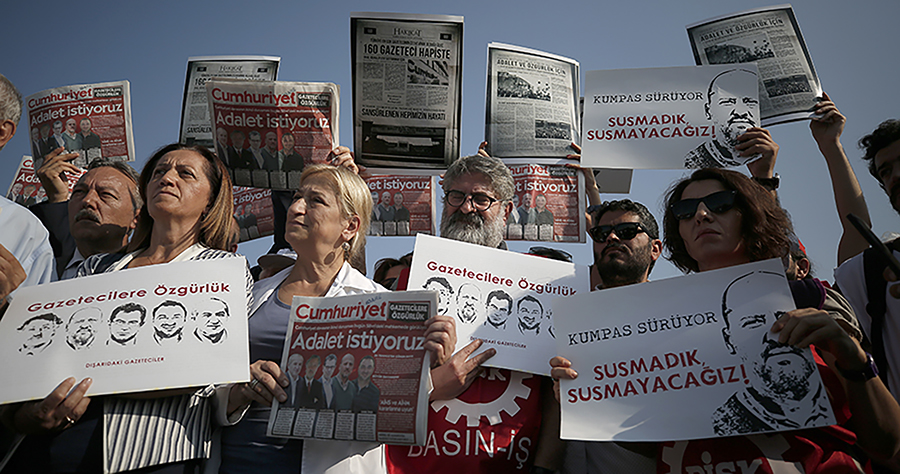 As prepared for delivery by Amb. Michael Kozak, Head of Delegation
Warsaw, September 11, 2018

The United States believes strongly in defending press freedom and the benefits of media pluralism. We condemn the politically motivated targeting of journalists and shuttering of media outlets, and undue or excessive structural and legal restrictions on the media.

Within the Russian Federation, state-owned or state-controlled broadcast media dominate the airspace. We are troubled by the government’s efforts to expand its control over the Internet, including through increasing use of censorship technologies and criminal prosecutions for sharing and liking content on social networks. We condemn the selective targeting of Radio Free Europe/Radio Liberty and Voice of America under Russia’s law on “foreign agent” media outlets. RFE/RL and VOA remain the only media outlets designated under this law, which exacerbates longstanding restrictions on the distribution of their products in Russia.

In Russian occupied Crimea, which is a part of Ukraine, conditions for media freedom are worse than in Russia, and nearly all independent media already has been forced to flee the peninsula. The few remaining independent journalists operate at tremendous risk. In eastern Ukraine, Russian led forces must release journalist Stanislav Aseyev who has been detained since June 2017 on what credible human rights organizations have characterized as baseless pretexts.

According to the Committee to Protect Journalists, Turkey is the largest jailer of journalists in the world. Authorities detained more than 150 journalists and shuttered nearly 200 media outlets since the attempted coup in July 2016. In the past six months alone, Turkish courts have sentenced 42 journalists to prison. Turkey has increased its control over the Internet. We are concerned that a new law requiring all online broadcasters to apply for a license will be abused to further restrict press freedom. Authorities arrested thousands for the simple usage of a mobile communications app, ByLock, holding it up as prima facie evidence of association with a terrorist organization. The United States recognizes the particular security challenges Turkey faces, but silencing critical voices is not the answer.

Undue restrictions on media freedom continue in Azerbaijan. The authorities continue to block independent media websites on various legal pretexts for publishing articles that are critical or unflattering of the government. Nine journalists and bloggers are incarcerated for their work, according to human rights defenders. Following his reported 2017 abduction in Georgia and subsequent arrest in Azerbaijan, journalist Afghan Mukhtarli was sentenced in January to six-years in prison on charges widely considered politically motivated. We urge Azerbaijani authorities to cooperate with the Georgian government’s investigation into Mukhtarli’s disappearance from Tbilisi and we again reiterate our call to Georgian officials to complete their investigation into the reported abduction.

In Belarus, security services raided the offices of several independent news sites for allegedly accessing without permission the paid subscription service of the state-owned news portal. At least two independent journalists were charged with serious cybercrimes that appear disproportionate to the alleged violation. We are watching the case closely and appeal for transparency and due process. We also urge the government of Belarus to discontinue the practice of selective blocking of online news outlets, as well as the fining of so-called “freelance” journalists.

The United States is encouraged by signs of meaningful reform in Uzbekistan. We welcome the long-overdue release of several journalists, including Yusuf Ruzimuradov, Muhammad Bekjanov, and Bobomurad Abdullaev. We hope additional reforms will follow, including the amendment or repeal of parts of the criminal code that have been systematically used to quash peaceful dissent, punish criticism of the government, and censor speech. We also look forward to the accreditation of additional international media outlets.

Kyrgyzstan has taken some promising steps. We welcome the dropping of charges against journalists Kabay Karabekov and Elnura Alkanova. We also welcome the withdrawal of a bill that would have established maximum damages for defamatory statements posted on the Internet.

Still, media in Central Asia remains highly censored, and journalists face intimidation and retribution for their work. We urge the governments of Central Asian participating States to drop politically motivated cases and to release those imprisoned for exercising freedom of expression, including members of the media. In Tajikistan, we welcome the August 22 release of and reduced charges on independent journalist Khairullo Mirsaidov, who wrote articles about corruption and brutality by the authorities. However, we note that more work remains to be done to ensure that Tajikistan meets its international obligations and OSCE commitments on freedom of expression.

Ukraine has been the target of the worst of Russia’s malign influence campaigns, designed to destabilize its society and undermine its government. We continue to urge Ukraine to take the high road and respond in ways that preserve the space for freedom of expression online and offline.

The United States notes that Poland reversed its decision to fine independent broadcaster TVN for coverage of rallies. We support the robust public debate that a pluralistic broadcast environment fosters. In Hungary, government allies, which benefit from state-funded advertising, continue to expand their control and influence over the media market, diminishing media pluralism and exposure to critical voices in the country.

A diversity of views can be expressed in the media in Serbia, including criticism of the government. However, economic pressures on media outlets encourage self-censorship, and the government appears to make decisions regarding advertising, tax audits, and the release of information on the basis of content. Some journalists have been harassed after reporting critically on government leaders.

The United States expresses its gratitude for the commitment of the Representative on Freedom of the Media to protect and advance freedom of expression for members of the media, online and offline.