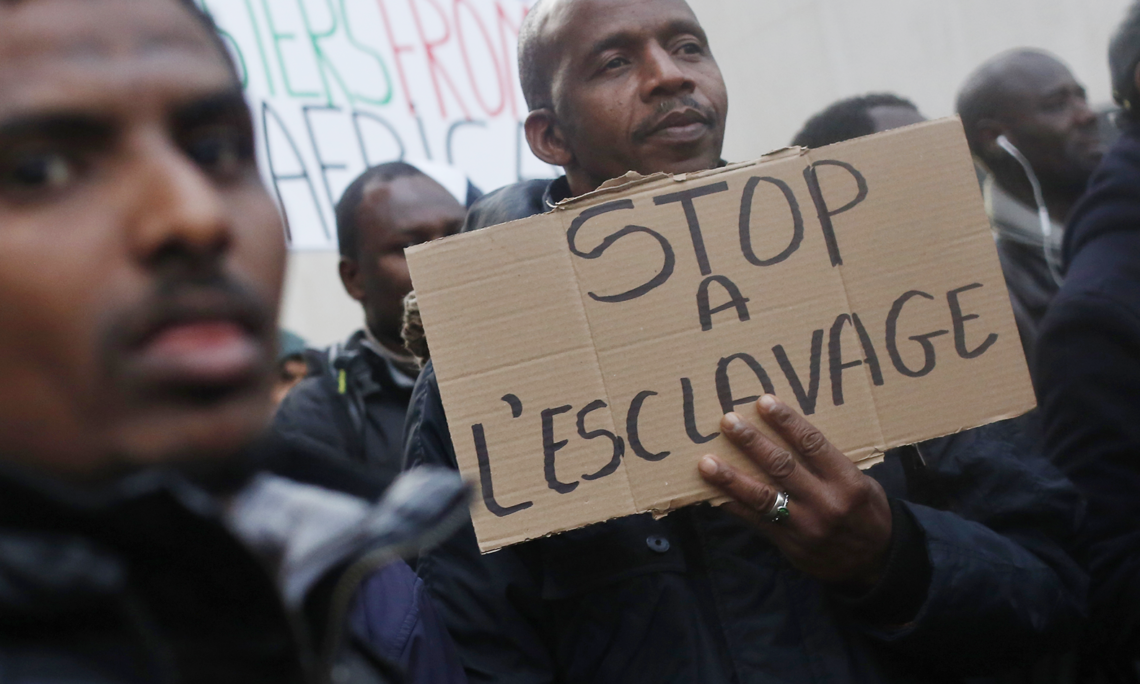 A protestor holds a placard that reads "Stop slavery" in French as he attends a demonstration against human trafficking, Paris, France, Nov. 24, 2017. (AP Photo)

Working Session 14: Humanitarian issues and other commitments, including: combating trafficking in human beings, refugees and displaced persons, persons at risk of displacement

As prepared for delivery by Harry Kamian,
Chargé d’Affaires of the U.S. Mission to the OSCE
Warsaw, September 19, 2018

The United States welcomes partnership with other participating States, non-governmental organizations, civil society, trade unions, and the business community in the effort to prosecute human traffickers, protect victims, and prevent human trafficking. Working together, we can make the OSCE region inhospitable to human traffickers, even as we face increased challenges in protecting vulnerable populations.

The United States warmly welcomes two OSCE Ministerial Decisions in 2017 to combat human trafficking in the OSCE region and beyond. Decision 7/17, sponsored by the United States, Belarus, and Italy, calls on participating States to prosecute those who misuse the Internet to facilitate access to children for sexual exploitation. This April, the President signed new legislation (“Allow States and Victims to Fight Online Sex Trafficking Act” [FOSTA]) that gives states and the federal government additional tools to take legal action against individuals or businesses that operate websites and technology platforms that advertise and facilitate prostitution, often involving victims of sex trafficking. The new law also makes it easier for survivors of sex trafficking to target websites with a federal civil action for enabling such crimes. The United States government also seized Backpage.com, a classified advertising website operating across the OSCE region that allowed traffickers to post sex trafficking victims for sale.

The United States strongly encourages other participating States to take action to deprive human traffickers of a market for selling their victims. We commend France for taking judicial action in June against Vivastreet.com, the second largest website in France for classified ads, including for commercial sex.

Unfortunately, we recognize that the United States is a main country of origin for sex tourists, a reputation we are working hard to lose. We are leading an international cooperative alert system called “Angel Watch.” “Angel Watch” has warned over 100 governments about more than 4,000 sex offenders who had previous offenses against children and who were seeking entry into other countries. For instance, in February, an individual convicted in 2011 for sexual exploitation of a child and child pornography attempted to travel from the United States to another participating State. The United States sent advance notification to that State, which then conducted a border inspection of the suspected perpetrator and found child pornography on the perpetrator’s electronic devices. The suspected perpetrator, who was traveling to work as a cheerleading and gymnastics instructor for children abroad, was arrested upon arrival and deported to the United States. Alerts on traveling sex offenders lift the secrecy and anonymity that allows exploitation of children. We urge all states to participate by creating their own registries and sending, receiving, and acting on alerts. We also urge all states to prosecute their own citizens when there is credible evidence that they have travelled abroad for child sex tourism.

In addition to protecting victims, an effective criminal justice response brings traffickers to justice both to punish them for their crimes and to deter others. Yet, in many countries, governments struggle to hold perpetrators of human trafficking criminally accountable and, even when convictions are obtained, they sometimes impose suspended sentences, fines, or administrative penalties in place of prison sentences. A strong anti-trafficking response should recognize the serious nature of trafficking in persons and impose punishments commensurate with those prescribed for other serious crimes in a given country, such as rape and kidnapping. The United States commends Germany’s federal and state-level police collaboration with EUROPOL, Romania, and Bulgaria on investigations of trafficking cases. The United States also commends Cyprus for increasing its convictions of traffickers and Serbia for consolidating jurisdiction over trafficking investigations. We strongly encourage Ireland, Armenia, and Mongolia to give priority to increasing prosecution efforts; in Mongolia, we urge the authorities to do this by ensuring that cases previously thrown out following passage of the new criminal code are reassessed for applicability under amended provisions and reopened accordingly.

The United States commends Italy for its efforts to address trafficking of migrants and refugees. In 2017, Italy increased investigations of and indictments for trafficking and related crimes, pursued trafficking rings, enhanced cooperation with 22 source countries in Africa, and doubled funds for assistance to victims. Italy also improved screening of youth claiming to be over 18, and sending youth instead to children’s shelters where it is more difficult for traffickers to exploit them. Greece tripled its trafficking convictions in 2017. Spain increased its already strong international collaboration to bring down two major trafficking rings, one of which had trafficked more than 7,000 individuals. The efforts of Italy, Greece, and Spain, which are first entry points for migrants and refugees, are critical to preventing trafficking across the region.

Accountability for government officials’ involvement in human trafficking is particularly important. To this end, authorities in the United States charged a municipal corrections officer, a municipal law enforcement officer, and a U.S. Navy seaman with sex trafficking. The United States commends Moldova for its progress in investigating and prosecuting complicit officials. The United States also commends Uzbekistan for its efforts to eliminate systemic forced child labor and reduce the use of forced adult labor during the annual cotton harvest, and encourages it to increase efforts toward ending forced adult labor in other sectors. We urge the Kyrgyz Republic and Tajikistan to continue investigating and prosecuting government officials complicit in trafficking and to combat the endemic corruption that enables many to do so with impunity.

The United States continues to be concerned about North Korea’s trafficking of its own citizens in OSCE participating States for the purpose of funding its nuclear ambitions. North Korean nationals working abroad often have 70 to 90 percent of their wages diverted to their government. Use of North Koreans as laborers in supply chains could trigger U.S. sanctions, and law enforcement actions. The UN Security Council resolution 2397 (2017) prohibits issuance of work authorizations for these North Korean nationals and requires countries to expel virtually all North Korean laborers earning income abroad by December 2019. UNSCR 2397 exempts from repatriation North Korean defectors, refugees, asylum seekers, and trafficking victims who may face persecution and torture when repatriated by the North Korean regime. The United States issued an advisory on July 23 to highlight tactics North Korea uses to evade these sanctions. The advisory alerts businesses to sanctions compliance risks under U.S. and/or United Nations sanctions authorities. We highlight the relevance of the advisory to Russia, which historically has issued work permits to high numbers of North Korean workers, and continued doing so as recently as August, as well as Belarus, Kyrgyz Republic, and Poland, which are noted in the advisory as hosting North Korean workers in 2017-2018.

Consistent with OSCE Ministerial Decision 6/17 on States taking a victim-centered, trauma-informed approach, the United States commends Estonia and Bulgaria for significant progress in 2017 to provide assistance to trafficking victims. Georgia empowered victims with a national referral mechanism that provided victims with different paths to receive official victim status. We commend Kazakhstan for directly funding NGO-operated shelters for trafficking victims, and encourage continued progress in this area so foreign victims can also access services at these shelters. We also encourage Mongolia not to make victims wait for care and shelter until prosecutors initiate a case against the alleged traffickers, and to cease criminalization of child victims of commercial sexual exploitation arrested during anti-prostitution raids. We encourage Hungary to adopt and implement a non-punishment provision to ensure trafficking victims are not inappropriately criminalized for unlawful acts committed as a direct result of being subjected to trafficking and to fund services for trafficking victims without legal residence.

Those who face economic marginalization are highly vulnerable to trafficking. We welcome Switzerland’s programs to fund NGOs in Bulgaria and Romania that provide victim assistance. We commend Montenegro’s coordination with the Roma Council and NGOs to organize awareness campaigns for the Romani community on trafficking issues. Macedonia’s seminars for Romani students, teachers, and NGOs on the risks of forced marriages of minors also are important, as is Croatia’s awareness-building campaign for Roma. We urge Bosnia and Herzegovina not to excuse forced labor, forced marriage, or begging by children as “traditional practices” when the victims are Romani children.

The U.S. Agency for International Development continues its Migrant and Refugee Human Rights Protection Project in Macedonia to strengthen the capacity of frontline employees to assist migrants and refugees. The program also organizes cross-border meetings with civil society organizations from Macedonia, Serbia, and Greece to foster effective coordination in providing assistance. The project has trained 228 representatives of government institutions and civil society organizations providing assistance to particular categories of migrants and refugees that are most vulnerable to trafficking.

As the number of vulnerable people in our region grows, so, too, must our individual and collective efforts to fight human trafficking. The two OSCE Ministerial Decisions have provided the strategy and proven best practices to stay ahead of the traffickers and to effectively identify and provide assistance to victims of human trafficking. We look forward to the discussion of how each participating State can do more toward attaining our goals of a trafficking-free OSCE region.