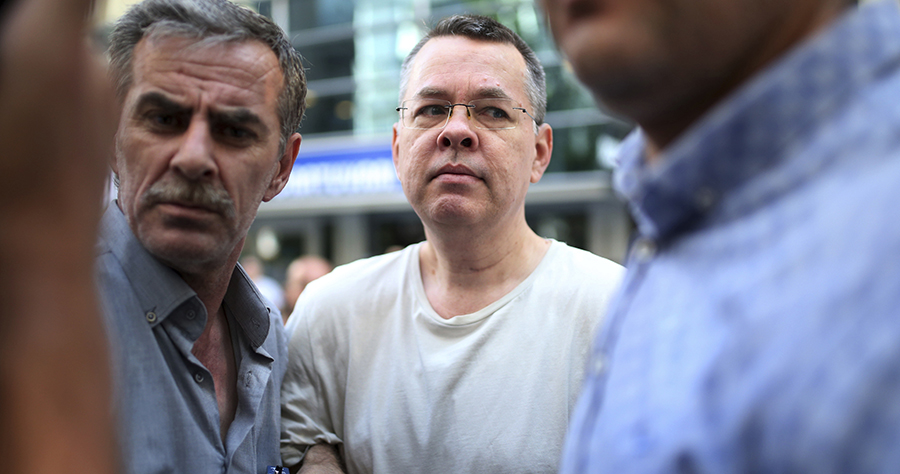 Promoting and defending international religious freedom is a fundamental issue for the United States. This July, U.S. Secretary of State Pompeo hosted the first Ministerial to Advance Religious Freedom. Following the Ministerial, the United States issued the Potomac Declaration and the Potomac Plan of Action. The Declaration reaffirms the fundamental freedom of religion or belief. The Plan of Action provides concrete ways to defend it. Separately, we thank Armenia, Canada, Denmark, Estonia, Georgia, Hungary, Kosovo, Lithuania, Poland, and the United Kingdom for signing on to one or more of the statements of concern issued at the Ministerial, including on “Counterterrorism as a False Pretext for Religious Freedom Repression,” “Religious Freedom Repression by Non-State Actors, including Terrorist Groups,” and “Blasphemy/Apostasy Laws.” The statements remain open for endorsement, and we invite all countries to join.

During the Ministerial, the United States highlighted one country for its recent progress: Uzbekistan. President Mirziyoyev and his government have taken significant positive steps including: easing registration requirements for religious organizations; registering the Presbyterian church “Light of the World”; permitting children to attend mosques; removing 23,000 names from a list of so-called “extremists”; releasing hundreds of prisoners held for their religious beliefs; and passing a “road map” to implement the recommendations of the UN Special Rapporteur on Freedom of Religion or Belief.

Uzbekistan has more to do to institutionalize these reforms and protect religious freedom for all, consistent with Uzbekistan’s international obligations and commitments. We encourage Uzbekistan to work with the OSCE, the UN Special Rapporteur for Religion or Belief, and other international experts as it drafts new laws and pursues new policies. We urge the government to release the remaining prisoners arrested for practicing their religion. We also urge authorities to cease violating the rights of individuals to freely and peacefully gather and express their religious views publicly. The government should continue to honor its public statements to register peaceful religious congregations without a cumbersome, multi-tier bureaucratic practice.

Unfortunately, a number of OSCE participating states are not taking actions to promote religious freedom; instead they are violating this human right. The Russian Federation continues to cloak its restrictive laws and legal rulings in trappings of combating so-called “extremism”. Russian law enforcement agencies have escalated targeted raids, detentions, arrests, criminal prosecutions, and imprisonments of Jehovah’s Witnesses on absurd “extremism” grounds. Other members of peaceful religious groups, including some Muslims, have similarly been targeted as “extremists.” According to credible NGO accounts, Russia currently imprisons over 130 people for their peaceful religious practice.

Russia is responsible for abuses in occupied Crimea. Russian occupation authorities continue to arrest, prosecute, imprison, and, in some cases, torture Crimean Tatar Muslims in retaliation for their opposition to the occupation and for peacefully practicing their religion. We call for these abuses to end and for the 2016 ban on the Mejlis of the Crimean Tatar People to be lifted. In eastern Ukraine, Russian-led forces are responsible for abuses in the areas they control. This spring, authorities of the self-proclaimed Lugansk People’s Republic issued a regulation requiring numerous religious groups to re-register places of worship wherein at least 30 people meet. The regulation also prohibits meeting for religious purposes in unofficial buildings like homes or storefronts. Baptists, Pentecostals, Charismatics, Seventh Day Adventists, and Jehovah’s Witnesses are among the affected groups.

The United States government has designated Tajikistan as a Country of Particular Concern since 2016 for having engaged in systematic, ongoing, and egregious violations of religious freedom. Tajik law prohibits children under 18 from participating in “public religious activities,” including attending public worship services, and restricts Muslim prayer to mosques, homes, cemeteries, and shrines. Jehovah’s Witnesses have been banned in the country since 2007 and designated as a so-called “extremist” group.

The United States government also has designated Turkmenistan as a Country of Particular Concern since 2014 for engaging in particularly severe violations of religious freedom. This year, the government resumed jailing conscientious objectors to military service. So far, all have been Jehovah’s Witnesses, including Arslan Begenchov, Kerven Kakabayev, Ikhlosbek Rozmetov, Veniamin Genjiyev, and Maksat Jumadurdiyev.

In Kazakhstan, which takes pride in local traditions of ethnic tolerance and religious diversity, the government nonetheless continues to deny registration applications from so-called “non-traditional” religious groups, censor religious materials, and prosecute individuals for “illegal missionary activities.” In March, authorities raided the New Life Protestant Church in Kyzylorda, and its pastor, Serik Bisembayev, was put under investigation for “inciting discord.” We welcome the Kazakh court’s decision to dismiss this charge and several recent decisions by Kazakhstan’s Supreme Court dismissing charges against the Jehovah’s Witnesses. We encourage Kazakhstan to utilize ODIHR’s expertise in its consideration of draft amendments to its religion law that could impose more restrictions. We call on the government to release all those imprisoned for their faith.

Azerbaijan says many of the right things about religious tolerance, but according to credible reports, the government continues to deny or delay registration to minority groups it considers “non-traditional.” Authorities disrupt their religious services and fine participants. The government has shut down mosques operating without registration and has imprisoned dozens of individuals associated with politically active Muslim groups.

The United States calls for the immediate release by the Government of Turkey of Pastor Andrew Brunson, who has been under house arrest since July following his prolonged and unjust detention on baseless terrorism charges. We are deeply disturbed by the portion of the indictment filed against Pastor Brunson that accuses him of acting to undermine the Turkish state by sharing his faith with citizens of Turkey, including distributing the Bible. Such a claim is a challenge to the rights of members of any religious minorities to discuss or teach their faith and is out of step with Turkey’s historic commitment to religious freedom. We positively note comments in June by then-Prime Minister Yildrim indicating the Turkish government’s intention to allow the registration of Alevi houses of worship.

In the OSCE region, we are also concerned about government interference in the ability of individuals to freely express themselves through religious attire and symbols, including in France, Belgium, Austria, the Netherlands, and Denmark. We stand behind the right of all persons to practice or manifest their beliefs, through wearing – or not wearing – religious attire and symbols. Similarly, we encourage governments to eliminate impediments for members of religious communities to gather for worship and construct places of worship. Such impediments have at times appeared to target members of minority faiths, as in the case of the ban on mosque minarets in Switzerland.

Finally, the United States is concerned about the prohibition of Muslim and Jewish religious slaughter of animals, commonly known as halal and kosher. These prohibitions contravene respect freedom of religion or belief. Denmark, Iceland, Norway, Slovenia, and Sweden unduly ban this exercise of religious freedom. Liechtenstein and Switzerland prohibit it except for poultry. Two of Belgium’s three regions have enacted laws prohibiting halal and kosher slaughter that will become effective next year unless litigation pending before the constitutional court prevails. Finland is updating its Animal Welfare Act to limit religious exceptions, which, if passed, will enter into force in 2020. We commend Cyprus, France, Germany, Luxembourg, and Poland for enacting religious exemptions to general requirements on animal slaughter.