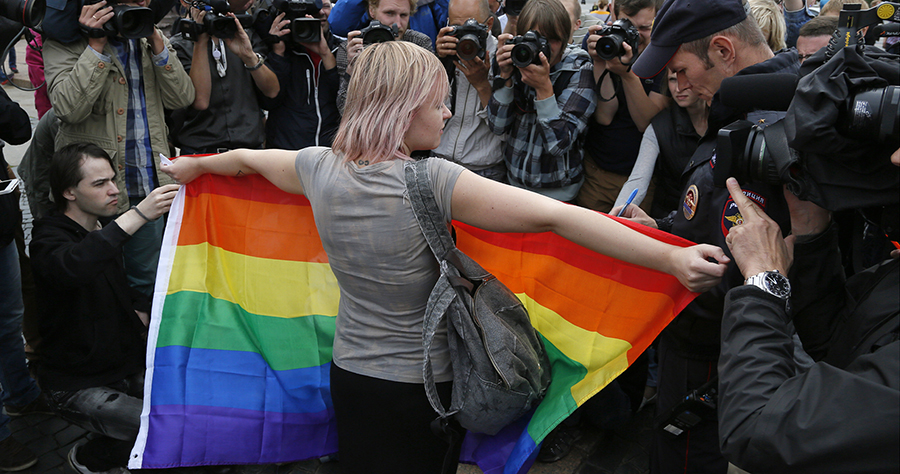 A gay rights activist stands with a rainbow flag during a protest in St.Petersburg, Russia, Sunday, Aug. 2, 2015. (AP Photo)

Working Session 4: Rule of law I, including – Right to a fair trial; Independence of the judiciary; Democratic law-making

As prepared for delivery by Amb. Michael Kozak, Head of Delegation
Warsaw, September 12, 2018

The United States is committed to strengthening the rule of law within the OSCE region and across the globe. We are particularly concerned when authorities turn laws into political weapons to punish individuals for exercising their fundamental freedoms of expression, peaceful assembly and association, and religion or belief. Judicial independence is essential to democratic government.

Respected human rights organizations have identified more than 180 political and religious prisoners being held by the Government of the Russian Federation. Many have been subjected to cruel practices revived from the Soviet era, including punitive psychiatric incarceration, closed trials, the transferring of prisoners to harsh colonies far from their families, and threats to strip them of their parental rights. We are deeply concerned about the well-being of hunger striking Crimean prisoners Oleh Sentsov and Volodymyr Balukh. We call on Russia to immediately release them as well as the nearly 70 other Ukrainians it has unjustly imprisoned. We also reiterate our call to release without delay activist Oyub Titiyev, who is being prosecuted on trumped-up drug charges in Chechnya in retaliation for his work exposing human rights violations and abuses committed by local authorities. Chechnya, led by Ramzan Kadyrov, is the most lawless part of the Russian Federation.

Last month, the United States was proud to join fourteen other participating States in invoking the Vienna Mechanism at the OSCE Permanent Council meeting to demand a response from the Russian Federation about credible reports of serious human rights violations and abuses in Chechnya, including the reported unlawful detention, torture, and killing of people based on perceptions of their sexual orientation. Journalists and civil society members who have documented these and other violations and abuses have been subjected to reprisal. Russia has failed to provide substantive answers to the invoking states within the Mechanism’s required ten days. We are evaluating next steps in coordination with our partners.

In Turkey, a succession of emergency decrees and restrictive constitutional amendments combined with the vague interpretation and broad application of new “counter-terrorism” laws have undermined the ability of the judiciary to provide timely, fair, and independent justice for the over 70,000 citizens detained since the July 2016 failed coup attempt. We urge Turkey to immediately release unjustly detained persons, especially U.S. citizens Pastor Andrew Brunson and NASA scientist Sekan Golge, as well as three Turkish national employees of the U.S. Mission in Turkey.

Politically motivated prosecutions continue to call into question the independence of Azerbaijan’s judicial system. After prominent opposition leader Ilgar Mammadov served five and a half years of his seven year sentence, an appeals court in August ordered his release, with two years’ probation. We note the European Court of Human Rights rulings that determined Mammadov had been illegally detained and denied a fair trial. We urge Azerbaijani authorities to release all those incarcerated for exercising their fundamental freedoms and to lift foreign travel bans on Mammadov and other opposition figures such as Ali Kerimli, lawyers like Intigam Aliyev, activists such as Anar Mammadli, and journalists like Khadija Ismayilova. We also call for thorough investigations into credible reports of abuse in custody, including torture. For example, there was no investigation after prominent blogger Mehman Huseynov stated police had abused him in custody; instead he was charged with criminal defamation and sentenced to two years in prison. Nor has there been accountability for the reported torture last year in prison of Muslim Unity Movement figures Abbas Huseynov and Jabbar Jabbarov.

The need to bolster the rule of law and root out corruption must remain significant reform priorities for the countries of the Western Balkans. We also urge the governments of the region to ensure equal access to justice for all, resist historical revisionism, promote reconciliation, and fully prosecute those responsible for war crimes and other serious crimes.

The United States encourages Serbia to remain focused on judicial reform, utilizing its European Union accession negotiations as a catalyst to improve the independence of the judiciary and to address concerns about lengthy pre-trial detention. Despite promises made to us by Serbian officials at the highest levels that action would be taken, those responsible for the brutal murders in July 1999 of three American citizens – the brothers Ylli, Agron, and Mehmet Bytyqi – still have not been brought to justice. We are disturbed by credible assertions that the leading suspect – former Interior Ministry official Goran “Guri” Radoslavljevic – enjoys close ties to the Serbian leadership, who protect him from prosecution.

We urge the governments of Serbia, Kosovo, Croatia, and Bosnia to stop politicizing justice, engaging in historical revisionism regarding the 1990s, and protecting those responsible for atrocities.

We encourage Albania to bolster its efforts to address systemic corruption, tackle organized crime, and ensure that justice institutions function properly and fairly.  We similarly encourage Macedonia to continue its progress in improving the integrity of its judicial system, especially by strengthening the independence of its judiciary and prosecuting corruption wherever it is discovered.

Romania has made significant strides in strengthening the rule of law.  However, we are concerned that changes in June and July to Romania’s criminal code and code of criminal procedure will weaken the rule of law and the ability to fight crime and corruption, including human trafficking.

We continue to pay close attention to judicial reform in Poland and reaffirm our commitment to judicial independence.

Turning to the participating States from Central Asia, in Tajikistan, so-called anti-“extremism” and anti-terrorism laws are misused to restrict political pluralism and target defense lawyers of political opposition members, as in the cases of Burzurghmer Yorov and Nurridin Mahkamov. Tajikistan has misused international law enforcement tools such as INTERPOL Red Notices to target members of the political opposition for reprisal.

We repeat our call for access to and information on disappeared prisoners in Turkmenistan. We note in particular that our former OSCE Permanent Representative colleague Batyr Berdiev is among those about whom there has been no reliable information for years.

In Kazakhstan, we are concerned about allegations of irregularities in the trial of businessman Iskander Yerimbetov and reports from civil society asserting that the case is politically motivated and that he has been mistreated in detention. We remain concerned also about the judicial process that resulted in the conviction and sentencing of Maks Bokayev to five years in prison for his alleged role in organizing peaceful demonstrations in 2016. In 2017, the U.N. Working Group on Arbitrary Detention found the Bokayev’s detention to be arbitrary. We encourage the government of Kazakhstan to comply with the Working Groups’s opinion and recommendations.

To end on some encouraging notes, we welcome Ukraine’s newly adopted legislation establishing an anti-corruption court – a major accomplishment. That said, Ukraine must do more to address systemic corruption and move forward with other necessary reforms.

We welcome changes in Uzbekistan’s legislation to prevent the use in legal proceedings of evidence gained through torture and their openness to additional reforms that increase transparency.

And in Armenia, we welcome the progress on investigating cases of corruption since the inauguration of the new government and underscore the importance of rule of law and due process in any prosecutorial actions.  We hope these moves will be accompanied by concrete reforms to bolster the independence and credibility of law enforcement authorities and the judiciary.