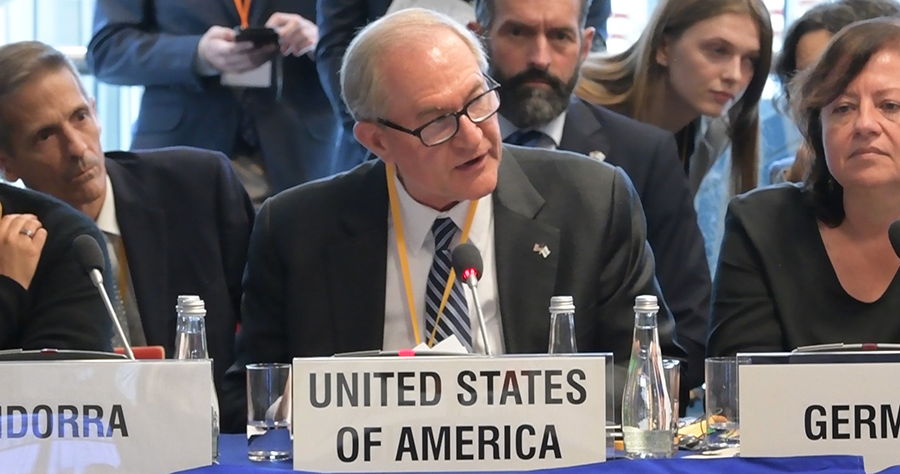 I am Jim Gilmore, the new U.S. Permanent Representative to the OSCE. It is my honor to join you in these important discussions. HDIM discussions go to the heart of the OSCE’s comprehensive security concept, which teaches us respect for human rights and fundamental freedoms. This is a principle that was put forward at the beginning of my country in the United States Declaration of Independence, drafted by my fellow Virginian, Thomas Jefferson.

States that violate and abuse the human rights of their own people are likely to be equally callous about the lives of people beyond their borders. Rule of law is a fiction when the law is used as a political weapon. Leaders who do not respect the rule of law at home appear most willing to violate the sovereignty and territorial integrity of other countries. In the OSCE region, we see this in Russia’s ongoing aggressive actions against Ukraine, which have caused the worst security crisis in Europe since the 1990s. Almost 13,000 people have been killed and two million driven from their homes in eastern Ukraine. In Russia-controlled areas of eastern Ukraine, those considered to have pro-Ukrainian sympathies are subject to imprisonment, extreme physical abuse, and killings. In occupied Crimea, authorities harass, detain, and prosecute Crimean Tatars, other Ukrainians, and any others who dare to reject Russia’s attempt to annex the peninsula.

As Secretary of State Mike Pompeo affirmed in his 2018 Crimea Declaration, the United States will maintain Minsk-related sanctions against Russia until it fully implements its Minsk commitments. Crimea-related sanctions will remain in place until Russia returns full control of the peninsula back to Ukraine. We stand with Ukraine as it implements the anti-corruption and other reforms necessary to realize its European aspirations.

My government welcomes the September 7 prisoner exchange between Russia and Ukraine, which led to the release of 35 Ukrainians, including the 24 crew members Russia seized in its November 2018 attack in the Kerch Strait and filmmaker Oleh Sentsov. We hope this is only a first step toward a constructive path to Russia’s relations with its neighboring countries.

Twenty years after Russia committed to withdraw its military forces from Moldova, its military forces remain on Moldovan territory without Moldova’s consent. We call on Russia to suspend its occupation of 20 percent of Georgia’s territory, withdraw its forces to pre-conflict positions, and allow unhindered access for the delivery of humanitarian assistance in accordance with its commitment under the 2008 ceasefire agreement. We call for the immediate halt and dismantling of fencing and other barriers along the administrative boundary line.

The United States is committed to working with other participating States and civil society to counter Russia’s disinformation and other malign influence. We condemn Russia’s detention of those peacefully protesting the rejection of candidate registrations for the Moscow City elections.

Since last year’s HDIM, Russia has used its Law on Undesirable Foreign Organizations to intimidate and arbitrarily prosecute, fine, and in some cases, arrest Russian human rights defenders, reporters and media outlets. Having classified the Jehovah’s Witnesses an “extremist organization,” Russian authorities jailed or placed under arrest over 60 of them, and has imprisoned nearly 230 persons for religious belief, most of whom are Muslims.

In Berlin in 2004, the participating States recognized that anti-Semitism and other forms of intolerance “pose a risk to democracy, the values of civilization and, therefore, to overall security in the OSCE region and beyond.” In all countries, including my own, we should be willing to prosecute those who commit crimes against their fellow citizens who are driven by hate or other motivation. In America, we are taking vigorous action to prosecute those who attack synagogues or Jewish citizens.

There is no room for crimes of hate and violence against anyone, anywhere, for any reason. There is never any justification for anti-Semitism, for anti-Muslim and anti-Christian discrimination, for anti-Roma and other racial or ethnic intolerance, or for criminalizing sexual orientation.

For all the troubling trends in our region, Madam Chair, there are also positive developments. We have been pleased to see several participating States hold generally free and fair elections in the past year, and we welcome the steps some States have taken to expand religious freedom.

In conclusion, I express my delegation’s deep respect for the human rights defenders who have journeyed from across the region to participate in this conference, perhaps at great risk of reprisal.