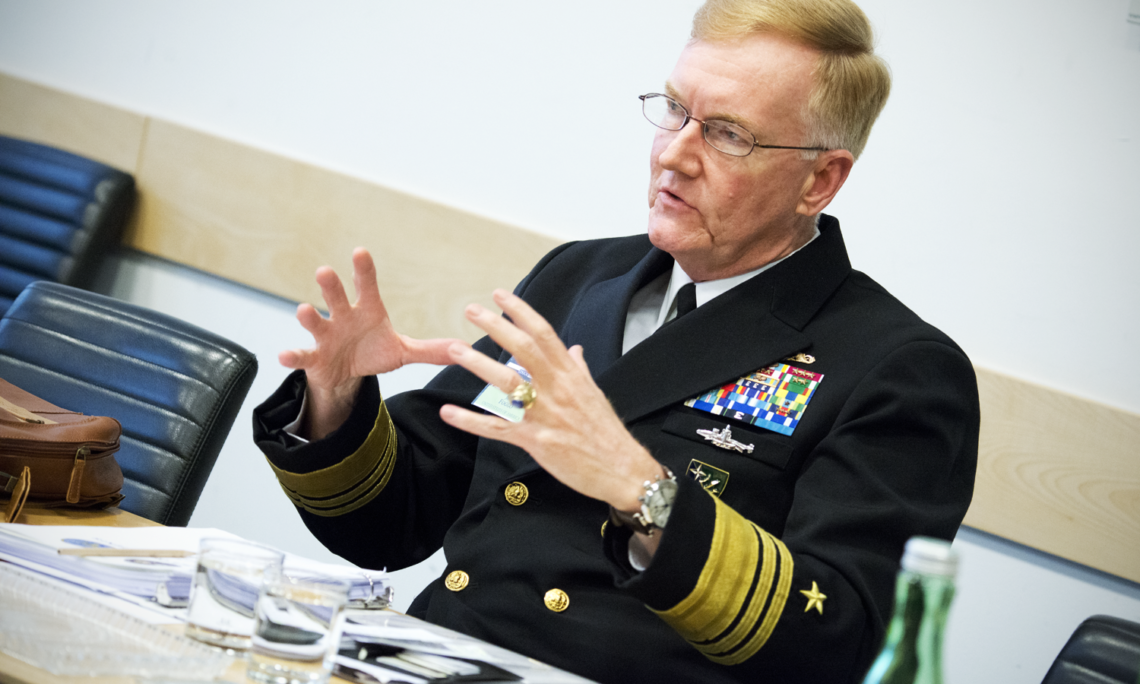 Ladies and gentlemen, Admirals, Generals, I am so pleased to be with you today and deferring to my French colleague sitting here to my left, I will start off in French. My career in Europe started thirty years ago with the Institute for Political Studies in Strasbourg, France. The university precisely where Robert Schuman representing the very birth of the European Union also was, but don’t worry, I will not continue in French because for you, and also for the interpreters that would be returning to the terror under Robespierre in the equivalent of French history.

While I was at the University of Strasbourg I came here many times to Vienna. The OSCE which is an organization whose name has morphed over time, is an organization with a long and distinguished history of contributing to comprehensive and cooperative ways to address security issues.

As we all know, there is still essential work to be done to create a Europe whole, free and at peace. And I believe strongly in this.

When I think back over the last few years, one of the most striking aspects I have confronted as Commander of the U.S. Sixth Fleet or the Commander of Striking Forces NATO is the rapid changes in the threats we face. Few would have predicted what we see today:

All of us have come to recognize that the emerging challenges we will face can come from any direction at any time. We will continue to face conventional and nuclear threats in the foreseeable future. And these will require military force to deter and, if necessary, to defend. At the same time, conventional adversaries and unconventional adversaries will embrace new technologies to accomplish their aims. They will take new forms that we are just beginning to imagine as possibilities.

In this new world, where information and ideas move at the speed of light, states, organizations, and individuals are now more empowered than ever to act. They can use the same breakthroughs that have offered new opportunities to create the potential for new and persistent security challenges.

In this environment, we have identified three related themes. First, the world is dramatically more globalized, and this trend is accelerating. Second, the rise of a global information system is enabling even greater multitude of near real-time connections between people at lower and lower costs of entry. And finally, the rate of technological creation and adoption is increasing. And this can be used by good people and by bad people.

How then should our political and military leaders plan and act to deter the threat of large-scale state-on-state conflict?

Can we deter against non-state actors simultaneously? How might we stay nimble and innovative enough to handle the myriad humanitarian and security challenges posed by a more networked society?

In the United States’ 2014 Quadrennial Defense Report, we stressed that, even in the face of severe resource constraints, it would be essential to develop a full spectrum capability to defend, deter, and maintain the peace. In our view, an active and capable defense is a critical deterrence. This is why, this month, the president has requested additional funds for Europe, to include quadrupling, as you heard this morning from General Hodges, European Reassurance Initiative (ERI) funding that will allow improved presence and allow us to increase interoperability through more frequent exercising and exchanges in Europe, $3.4 billion.

This also highlights a key point of our approach; partnership. Let me say that again, I believe strongly in partnership. In a resource constrained environment, we cannot do it alone. Cooperation based on shared principles, objectives and respect will have the best chance of sustained peace.

The United States Navy has recently issued two texts that amplify this approach. One I was intimately involved in, the Cooperative Strategy for the 21st Century, that I think inspired the second one, which is the Design for Maritime Superiority. One published in 2015 and the other most recently published in 2016. These documents highlight the need for presence and cooperation. This approach focuses on cultivating and strengthening partnerships, learning faster and more collaboratively, and putting a technologically advanced deterrent force to sea. Our goal is to protect those shared spaces that we all need to thrive in this complex and integrated world.

The presence of Naval forces and partners and allies at-sea provides a visible and credible deterrent to those who might threaten the rules that underpin stability and security, be they state actors or non-state actors. It helps us reinforce agreed upon international rules that are necessary for peace and prosperity.

Let me give you an example. Last year for the first time since 1973 we had a naval NATO commander take command of BALTOPS, the Baltic Operations Exercise.

I had the pleasure to serve as the commander of that flotilla as Commander Strike Force NATO and I had a front row seat to this challenging and ultimately highly rewarding effort. And we’re going to do it again next year and tomorrow I leave for Riga, Latvia for our mid-term planning conference. And the force offerings are coming in, it’s going to be great.

In this rapidly changing security environment the exercise last year represented the strength found in cooperation: 17 like-minded nations sailing together to openly assure security and cooperation in those shared spaces that connect us, particularly in the Baltic. In a sense it applies OSCE security principles and best practices to the military arena, in the maritime domain, building understanding and trust through transparency and collaboration.

49 Ships, 62 aircraft, 5,600 sailors, airmen and Marines came together, 700 Marines hit the beach in Ravlunda in Sweden and again in Ustka, Poland. Broad multinational efforts helped ensure that we would not have to see a threatening future in the Baltic.

I recently wrote about this, you’re welcome to read the article, it’s called “Not Your Father’s BALTOPs.” And it talks about some of the themes from the front table here today, about the use of media to transparently get our messages out, that we had nothing to hide. All of our planning was done in the open, all of our planning was unclassified, everybody knew where we were taking off from in Gdynia, Poland, and they knew where we were going to end up in Uedem, Germany. And it’s always been that way.

At one point, using social media, we had a welcoming committee from Kaliningrad, from the Russian Air Force. They flew over with about two shipsets, two sorties of aircraft four times, high-speed, low altitude. And every sailor has a cell phone, an iPhone, we had everybody take lots of pictures and video. And I said, put it on YouTube, and here’s the caption, “Sailors and Marines of BALTOPS 2015 enjoy an airshow compliments of the Russian Air Force.” And they said, do you really want to say that, sir? And I said, I do! We’re out here in a Phase Zero Operation, they know we are here, I want them to know we are here. If I was a pilot in a big aircraft looking down at 49 ships, I’d be pretty intimidated. And so it provided a strong message of solidarity, alliance, unity of command, unity of effort, and reassurance to our Baltic partners.

And with that, ladies and gentlemen, thank you for your indulgence, and I’ll stop there.