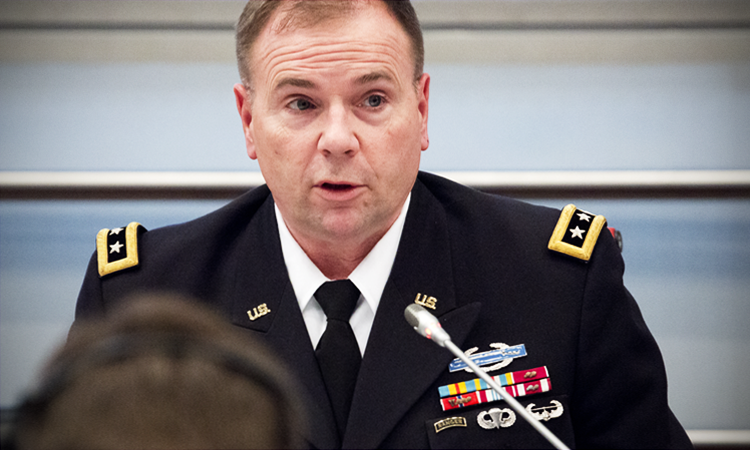 It is a distinct honor for me to be with you today at the beginning of Germany’s chairmanship of the OSCE and to be included in this High-Level Military Doctrine Seminar. The OSCE is a unique institution offering a neutral venue to address tensions across Europe, with a well-earned decades-old track record of results. I hope my views and comments will be of some help to you in your discussions.

And, Madame Moderator, I want to acknowledge the efforts of the men and women of the OSCE Special Monitoring Mission, working under trying and dangerous conditions, working for peace.

Today, I want to talk about the big picture as it relates to this panel’s topic: the Security Situation in the OSCE Area and Operational Trends. Organizations such as the OSCE were founded on the belief in respect for the sovereignty of all states, refraining from the threat or use of force against neighbors except in self-defense, and inviolability of borders. Inherent in this is the commitment of nations, especially large nations, to settle disputes peacefully; to come to the negotiating table to resolve conflict without the looming threat of force. The United States is committed to these principles.

In 2008 and in 2014, this practice of working together to resolve conflict peacefully was unfortunately set aside when Russia invaded first Georgia, then Ukraine. Those unilateral, military incursions have caused concern throughout Europe. One result is that NATO has taken a series of actions coming out of the September 2014 Wales Summit to assure our Allies of our commitment to their security and to deter further aggression. I discussed many of those steps here at the OSCE in my speech at the Annual Security Review Conference last June. We have moved forward since that time, with a posture that is strong but balanced.

Strong means we will ensure we have adequate capability to assure our Allies and to deter aggression. President Obama recently announced his funding request of 3.4 billion dollars for the European Reassurance Initiative (ERI) for our fiscal year 2017. This request quadruples last year’s ERI funding level and represents a significant augmentation of the United States’ efforts to ensure peace and security in Europe. Over the past two years, the United States has increased military activities in Eastern and Central Europe to assure Allies and partners of our ironclad commitment to collective defense under Article 5 of the North Atlantic Treaty. ERI has five components, which form the core of U.S. military doctrine in support of Europe’s security: 1) increased rotational presence; 2) additional bilateral and multilateral exercises and training with Allies and partners; 3) enhanced prepositioning of equipment; 4) improved infrastructure to allow for greater responsiveness; and 5) intensified efforts to build partner capacity with newer NATO Allies and partners.

Balanced means we support Europe’s security efforts – both in Eastern Europe and along its southern borders.  We do so openly and with transparency. We do so by participating in NATO exercises and by invitation in other bilateral and multilateral exercises from Portugal to Finland and from Greece to Estonia. For example, in our implementation of the Vienna Document 2011, we welcomed Russian inspectors at Grafenwöhr, Germany on January 19th of this year. In addition, we welcomed Russian observers in November 2015 in Bulgaria during exercise PEACE SENTINEL and in August 2015 in Germany during exercise SWIFT RESPONSE. During exercise SWIFT RESPONSE, a multi-national airborne exercise, Germany also received a Russian Open Skies Treaty overflight request at the same time as the Vienna Document inspection. The Russian Federation also conducted an Open Skies Treaty overflight of Germany in November 2015 over U.S. Army facilities in Baumholder, Mannheim, and Wiesbaden. In all of these observations, the U.S. Army Europe has welcomed these visits in the spirit of openness and transparency. And we look forward to hosting Russian inspectors and evaluators at other exercises later this year, all of which are published many months ahead of time and covered by international media, unlike the frequent, large-scale Russian snap exercises.

The United States will maintain its commitment to a persistent rotational presence of air, land, and sea forces in Central and Eastern Europe for training and exercising. In order to enhance deterrence, the United States will also maintain persistent presence of a rotational U.S. armored brigade in Europe. In addition to increased rotational presence, the enhanced U.S. forces in Europe will enable more extensive U.S. participation in exercises and training activities with NATO Allies and partners, improving overall readiness and interoperability.

As announced in June 2015 by U.S. Secretary of Defense Carter, the European Activity Set (EAS), which includes all of the vehicles and equipment of one U.S. armored brigade combat team, is sited in the host nation installations of several NATO allies, including Estonia, Latvia, Lithuania, Poland, Romania, Bulgaria, and Germany in order to support exercises and training by a rotational brigade in Europe. The President’s budget request will place additional Army Prepositioned Stock (APS) in Europe. These will be additional combat vehicles and supplies and are intended to reduce force deployment times and enable a rapid response to potential contingencies, not for rotational use.

In addition, we will continue to work with our Allies throughout Europe to improve infrastructure on installations such as airfields, railheads, training centers, and ranges, which will improve Allied military readiness in the region and provide for quick dispersal of forces if required. Finally, ERI funding will continue to build the capacity of Central and Eastern European allies and partners to defend themselves and enable their full participation as operational partners in responding to crises in the region.

I want to reassure this group, right now, that all these steps have been undertaken with a view to ensuring that NATO’s defense posture is sound. While it is certainly true that NATO Allies are committed to maintaining the highest standard of interoperable and effective forces, we do not seek conflict. NATO is and always has been a defensive Alliance. Our purpose is to deter threats to the security of the members of the Alliance and our partners. These steps are entirely consistent with our international commitments, legal and political. They are consistent with the CFE Treaty. They are consistent with the NATO-Russia Founding Act. They are consistent with international law: all our forces are present on the territory of European Allies at their invitation and with their full consent; we stand by the tenets of the Helsinki Final Act.

Russia cannot say the same. It has chosen to shape its relationship with neighbors without regard to Helsinki principles such as respect for the territorial integrity of states. The economic tools at its disposal and the traditional ties forged over decades would certainly have given Russia a very strong negotiating position in any discussion with its neighbors, had they opted for negotiations and not force to achieve their goals. Instead, Russia’s use of force in Ukraine has resulted in over 9,000 deaths and over 1 million displaced people.

I want to talk a little about an information fog that sometimes makes it harder to see exactly what Russia is doing. A simple, but accurate, way to view Russia’s public explanation of its foreign policy is what UK-based analyst and writer on European security Ben Nimmo refers to as the four D’s: dismiss, distract, distort, dismay.

Dismiss: the best-known example is Russia’s consistent denial that it has forces in Ukraine. This began as early as March 4, 2014, when senior Russian officials flatly denied they were Russian soldiers in Ukraine and that the so-called “little green men” were not Russian soldiers.

We continue to see this tactic used by Russia when it denies that its airstrikes in Syria cause civilian casualties.

Distort: Russian officials and media have also developed a strong tendency to distort information to serve their overall narrative. For example, in late March 2015, Russian media reported heavily on a “wave” of protests sweeping across the Czech Republic in response to the U.S. Army “Dragoon Ride”, a convoy of U.S. Army Stryker vehicles passing through the country back to its base in Germany. This distorted coverage obscured the overwhelming and enthusiastic welcome the U.S. troops received while misrepresenting to Russian audiences the Czechs as unsupportive NATO Allies.

Distract: Russia deployed capabilities into Syria claiming that they intended to fight ISIL. That has clearly not been what they have done. In addition to whatever Russia is doing on the ground in Syria, they are using their actions there to distract the world from what they continue to do in Ukraine.

Dismiss, distort, distract, and finally dismay. The last is especially painful in the OSCE region where respect for international norms should be our common watchword. Consider the obstacles to implementation of the Minsk agreements the OSCE’s Special Monitoring Mission (SMM) has found in the conflict zone in Ukraine’s Donbas, including continuing access restrictions imposed by the joint Russian-separatist forces. Just last weekend at the Munich Security Conference, the OSCE’s Secretary-General Zannier called the current situation “the worst since September.”

In addition, the ceasefire violations continue: on February 9th, in Stakhanov, Luhansk oblast, a so-called “LPR” member fired six pistol rounds into the wall of a dining room of the hotel where six SMM monitors were present. While no one was injured, this sort of harassment and intimidation cannot be allowed.

Access restriction and hindrance is equally alarming.  In Donetsk region alone, between October 30 and January 17, so-called “DPR” members restricted the SMM’s freedom of movement on 60 occasions: 48 were denial of access, three were conditional access, and nine involved significant delays. The Ukrainian Armed Forces in the Donetsk region restricted the SMM’s movements on 21 occasions: denying access in 18 instances and conditional access on one occasion; and experiencing two significant delays. The most disgraceful and serious restriction occurred on January 7, 2016, when, while patrolling in Horlivka, the SMM was stopped by armed “DPR” members who forced monitors from their vehicles at gunpoint, and forced them to the ground. This mistreatment of the SMM is a blatant, unacceptable violation of the SMM’s right to freedom of movement, and their ability to fulfill their mandated OSCE mission.

Madame Moderator, distinguished colleagues, I hope you see this as unacceptable as I do and I encourage you to take what steps you can to allow the SMM to do its job. I hope that the Russian Federation will use its influence to help the SMM succeed in its mission, just as President Obama asked President Putin in their phone conversation on Sunday. Commitments made as part of the Minsk process need to be fulfilled. We need a real ceasefire that holds. We need heavy weapons withdrawn; we need an end to efforts at destabilization.

Madame Moderator, as NATO’s Supreme Allied Commander, General Breedlove, said last month: “Europe isn’t what it was 18 months ago, or even six months ago. New threats and challenges seemingly emerge every day.”

It is my hope that nations can work together to resolve these threats and challenges peacefully. However, the United States recognizes that in Europe, we also need to be strong but balanced to deter and react to military aggression.