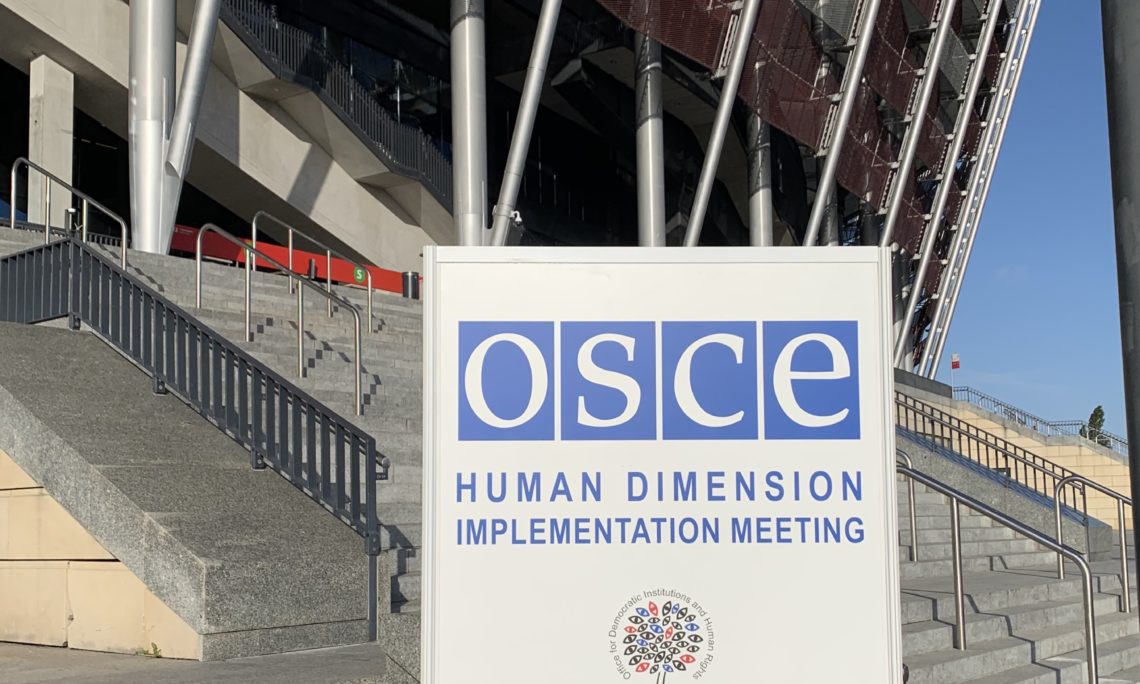 As prepared for delivery by Ambassador James Gilmore III, Head of Delegation
to the 2019 Human Dimension Implementation Meeting, Warsaw
September 16, 2019

When freedom of expression is under attack, the whole of society suffers.  Journalists lose their ability to hold officials and institutions accountable.

Freedom of expression and access to media are unduly limited in many OSCE participating States through excessively restrictive laws, political actions, technological measures, and economic pressure.  Use of the law to intimidate journalists, including through fines and imprisonment, is probably the most rampant form of restriction, leading to censorship and self-censorship.

OSCE Representative on Freedom of the Media Harlem Désir raised 121 individual cases of journalists in detention and imprisonment in the OSCE region in the last reporting period.  According to the Committee to Protect Journalists, Turkey jails more professional journalists than any other country in the world.  Since the 2016 failed coup attempt, nearly 200 media outlets have been closed and dozens of journalists jailed.  Some online content and media outlets have been blocked.  The United States recognizes the particular security challenges Turkey faces, but silencing critical voices is not the answer.

In a December 2018 report, the Committee to Protect Journalists ranked Azerbaijan as the OSCE region’s second largest jailer of journalists.  Azerbaijan has since released some of the journalists incarcerated at the time of CPJ’s report, but authorities continue to unduly restrict freedom of expression through excessive controls on the news media, including by prohibiting foreign media outlets such as U.S.-based Radio Free Europe/Radio Liberty (RFE/RL) from operating in Azerbaijan, and blocking independent media websites.

In addition to journalists, Turkish and Azerbaijan authorities have incarcerated opposition figures and others for exercising their fundamental freedom of expression.

In Russia, the government is increasing its efforts to censor speech online by banning expressions of “disrespect” for state or government officials and prohibiting the dissemination of information the government deems untrue.  Russia’s Foreign Agent Law, expanded to include media outlets in 2017, has contributed to a deteriorating media freedom environment in Russia.

We are concerned that some participating States unduly restrict public access to media by controlling Internet access or by blocking certain websites.

Belarus blocks webpages and punishes journalists and bloggers for reporting without accreditation or reporting on unauthorized demonstrations.  In Kazakhstan, certain social media and news websites were intermittently inaccessible around the time of its recent presidential election.  Over the past several months, authorities detained and harassed journalists – especially, but not limited to, RFE/RL Radio Azattyq’s reporters.  The pending law on the accreditation of journalists who cover government affairs is concerning, as it further restricts the ability of journalists to report freely.  Turkmenistan regularly blocks websites, social media, and messaging apps such as WhatsApp and Signal.

The United States echoes the Representative on Freedom of Media’s call on Tajikistan to remove excessive restrictions on access to national and international online news media, social platforms, and search engines, following the repeated blockages of several internet resources in the country.  We urge authorities to investigate reports that family members of journalist Humayra Bakhtiyar were intimidated, and we call for reconsideration of the withdrawal of press accreditation for RFE/RL’s correspondent in Dushanbe.

We welcome the restoration in May of access to multiple human rights organizations and online media sites in Uzbekistan that had been blocked for more than ten years.  However, Uzbekistan continues to block access to RFE/RL.  We call on the authorities to unblock it immediately.

In Hungary, the private owners of 476 government-friendly media outlets, constituting 85 percent of the domestic market, placed their outlets under the control of a foundation which the government subsequently exempted from competition or regulatory oversight.

We call on all participating States to implement their commitments on the safety of journalists and on advancing a free, independent, and pluralistic media.