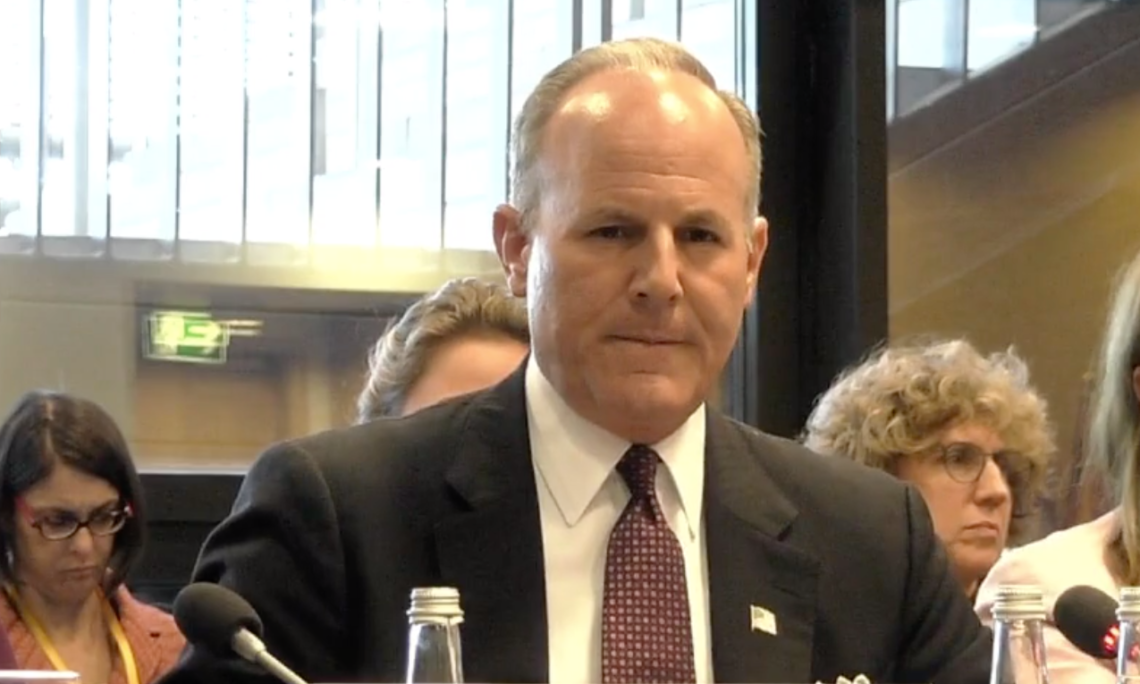 As prepared for delivery by Elan Carr, Special Envoy to Monitor and Combat Anti-Semitism
to the Human Dimension Implementation Meeting in Warsaw,
September 24, 2019

I am Elan Carr, the United States Special Envoy to Monitor and Combat Anti-Semitism. The United States is committed to combating intolerance in all of its forms. All persons are born equal in rights and dignity, regardless of race, color, national origin, religion, gender, disability, sexual orientation, or identity.

But let me first address that most ancient and relentless form of hatred, anti-Semitism. I have the great privilege of holding this office on behalf of the American people and a President, Secretary of State, and Administration that have made the fight against anti-Semitism a top global priority.

Only 75 years since the Nazi crematoria have cooled, anti-Semitism continues its global rise, mutating into new forms and spreading with unprecedented speed via new technologies. We are seeing Jews vilified, demonized, and physically attacked throughout the world.

In the six months since my appointment as Special Envoy, I have visited eight countries, seven of them OSCE participating States, plus Israel, an OSCE partner for cooperation. Jews in Central and Eastern Europe told me of their distress over the growth of far Right ethnic supremacist movements in their countries, while Jews in Western Europe told me they live in mortal fear of violent extremists. A member of a West European parliament said anti-Semitic slurs have been hurled at Jewish MPs by their own colleagues in Parliament. Jews in the United Kingdom confided that some in their community are seriously contemplating emigration because they fear anti-Semitism has increased under a major political party’s current leader.

Last fall, the European Union Fundamental Rights Agency released the results of its survey of members of Jewish communities in 13 EU countries, which constitute more than 96 percent of the EU’s estimated Jewish population. Overall, 89 percent of the respondents felt that in the five years prior to the survey anti-Semitism had increased in their country, and more than a third (38 percent) had considered emigrating because they did not feel safe as Jews in their country. More than one quarter (28 percent) had encountered some form of anti-Semitic harassment in the prior 12 months.

I have found fear among Jewish communities in my own country as well – including in my home state of California. This April, outside San Diego, I spoke at the funeral of Lori Kaye, who was murdered in the Chabad of Poway synagogue on a Shabbat during Passover. Lori died trying to shield her Rabbi from the gunman. The shooter, it was later learned, had allegedly committed arson the month before against a mosque. The Poway shooting happened six months to the day after Jewish worshipers were murdered in the Tree of Life synagogue in Pittsburgh. In other U.S. cities, I have visited traumatized Jewish communities that contend with anti-Semitic incitement, vandalism, and street violence. I have met with student leaders on campuses across my country who report to me that their universities have become hostile learning environments for Jews. Jewish ethnicity, Jewish history, and the right of the State of Israel to exist are attacked and denied by professors and students who traffic in the anti-Semitism of the far Left. All this in the United States, which historically has been, and still remains, the most philo-Semitic country on Earth alongside Israel.

We are also seeing a disturbing erosion of Holocaust understanding throughout the world. A 2018 CNN poll on European attitudes toward Jews found that 34 percent of those surveyed said they knew just a little or had never heard of the Holocaust. The statistics are not much better in the United States. Each day, Holocaust survivors pass away. We must not let the deniers and the haters fill the vacuum. We must not stand idly by when we see attempts in this region to rehabilitate those who perpetrated the Holocaust or voluntarily supported anti-Jewish laws during World War II and hold them up as heroes to new generations. Our children will not learn the Holocaust’s universal lessons for humanity unless we educate them on historical fact, teach them about the horrors that come from unchecked hatred, and inspire them by our own example to a stand up against intolerance in all of its forms.

Anti-Semitism is evil, and it does not matter if it comes from ethnic supremacists on the far Right, anti-Zionists on the radical Left, or from violent extremists. We need to combat all of it. It is a global problem that requires coordinated action by all people and all governments of good will. Thankfully, I have encountered many.

One of the great pleasures of my work is to be able to partner with remarkable leaders like the European Union’s Coordinator on Combating Anti-Semitism, Katarina von Schnurbein, and John Mann, the British government’s independent adviser on anti-Semitism and longtime Chair of the Inter-parliamentary Coalition for Combating Anti-Semitism. Leaders also like Felix Klein, Germany’s commissioner for anti-Semitism, and Deputy Foreign Minister Georg Georgiev, Bulgaria’s National Coordinator. And of course, the OSCE’s own invaluable Rabbi Andrew Baker.

My very first official travel as Special Envoy was to participate last February in the Conference on Combatting Anti-Semitism hosted by the Slovak OSCE Chairmanship. I applaud the Chairmanship for its leadership. At that meeting in Bratislava, the OSCE participating States reaffirmed their decades-old OSCE commitments against anti-Semitism and discussed best ways to put them into practice. Reaffirmation and discussion are important. Action is imperative.

To take effective action, governments, law enforcement officers, courts, educators and the public must be able to identify anti-Semitism in all of its manifestations, both age-old and contemporary. The International Holocaust Remembrance Alliance’s working definition of anti-Semitism has been a game-changer. My own country and a growing number of OSCE participating States apply the working definition. We urge all those that have not yet adopted that definition to do so. We commend ODIHR for using it.

We also urge participating States to work with ODIHR to provide to their officials, police, and populations much needed Holocaust education, anti-bias training, and other capacity-building measures against intolerance. ODIHR’s path-breaking project, aptly named Turning Words Into Action, developed and deployed successful strategies tailored to combatting anti-Semitism in communities across this region. The United States urges ODIHR not to dilute the focus or momentum of this vital work on anti-Semitism, even as ODIHR expands its efforts against other forms of hatred.

In his 2019 State of the Union Address, President Trump declared, “We must never ignore the vile poison of anti-Semitism, or those who spread its venomous creed. With one voice, we must confront this hatred anywhere and everywhere it occurs.” We all must understand what is at stake in this cause. The fight against anti-Semitism is not only about protecting Jews, although if it were, we still would have sufficient moral reason to act. But it is about so much more than that. Anti-Semitism is History’s great barometer of human suffering. President Trump calls it a “vile poison” because societies that have imbibed this poison have rotted to their cores, and produced human misery at levels that defy description.

The horrors of the last century have made the OSCE region especially aware of the widespread wreckage that results from anti-Semitic hatred. And so, in Berlin in 2004, the participating States rightly recognized that anti-Semitism and other forms of hatred “pose a threat to democracy, the values of civilization and, therefore, to overall security in the OSCE region and beyond.”

The United States seeks to work in partnership with all OSCE States, ODIHR, the three Tolerance Representatives, the private sector, faith communities and civil society across the region to combat the dangers of all manifestations of hatred.

We commend U.S. Senator Benjamin Cardin, who is the OSCE Parliamentary Assembly’s Special Representative on Anti-Semitism, Racism, and Intolerance, for holding an event entitled Countering Hate: Lessons from the Past, Leadership for the Future during the July Parliamentary Assembly meeting in Luxembourg. The event featured the U.S. Holocaust Memorial Museum and called for parliamentarians from across the OSCE to adopt an action plan to counter bias and discrimination and foster inclusion.

We also welcome the co-operation among the Council of Europe’s European Commission against Racism and Intolerance (ECRI), the European Union’s Agency for Fundamental Rights, (FRA) and ODIHR.

My government strongly condemns hate crimes. As a former criminal prosecutor for the State of California who has prosecuted hate crimes, I am especially sensitive to this evil. I can personally attest to the importance not only of investigating and prosecuting hate crimes, but also of collecting disaggregated data on them and sharing that data with ODIHR. Data collection sounds like a boring subject until you know somebody who has become a statistic, or you sit with a grieving family. I cannot emphasize enough how essential the collection of disaggregated data is in helping law enforcement and decision makers shape effective strategies against these appalling crimes. The U.S. delegation will have more to say about taking action against hate crimes in Sessions 14 and 15.