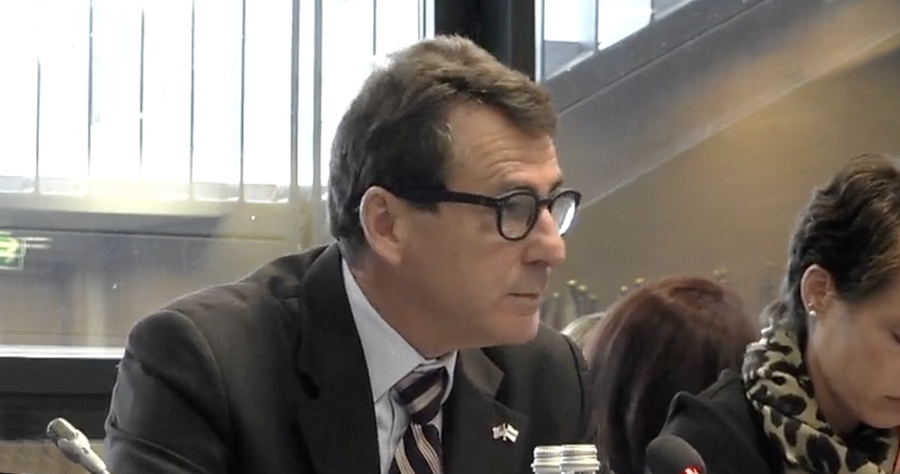 As prepared for delivery by James Donegan, Director of the Department of State Office of European Security and Political Affairs
to the Human Dimension Implementation Meeting in Warsaw,
September 25, 2019

Hate crimes have no place in our society.  These despicable crimes violate the law, hurt their victims, and harm all of us by violating our core values and eroding civic trust.  Recent hate crimes in the United States and abroad are deeply troubling to those of us at the State Department, to my colleagues at the Department of Justice, and to decent people everywhere.

In the past two years, more than 300 lives were tragically lost in places of worship in Christchurch, New Zealand, Colombo, Sri Lanka, and Pittsburgh, Pennsylvania and Poway, California in the United States.  Earlier incidents at houses of worship in the OSCE region include a Muslim worshipper killed at Finsbury Park Mosque in the United Kingdom, a priest killed in the French Normandy Church of Saint-Étienne-du-Rouvray, the murder of six worshippers in the Quebec Islamic Cultural Centre in Canada, and the murder of nine church members in Charleston, South Carolina in the United States.  The OSCE’s Supplementary Human Dimension Meeting (SHDM) in April, which focused on religious intolerance, highlighted comprehensive approaches that bring together government institutions, international organizations, criminal justice systems, and civil society, including religious actors.

The United States has made hate crimes prosecutions a priority.  Between January 2017 and August 2019, the Justice Department charged more than 55 defendants with hate crimes charges and obtained the convictions of more than 50 people in hate crime cases, with some cases still pending.

For example, the Department successfully prosecuted an Ohio man who drove his car into a crowd of protesters in Charlottesville, Virginia and killed a peaceful protester on August 12, 2017.  In March of this year, he pleaded guilty to 29 federal hate crimes and was sentenced to life in prison on June 28. Our prosecutors have also charged four other defendants for their actions in Charlottesville.

In November 2017, the Department sent an experienced and highly respected federal Civil Rights Division prosecutor to assist with the prosecution of two Iowa men charged in state court with murdering a teenager who identified as gender-fluid.  Both defendants were found guilty and will now spend the rest of their lives behind bars.

Additionally, the Department secured a jail sentence in October 2018 for a Texas man who harassed and intimidated an African-American family in his apartment complex.  Last spring, we secured a life sentence for a man who killed an innocent Indian-American man at a bar in Kansas because of his perceived national origin. And in other recent prosecutions, a Texas man was sentenced to more than 24 years in prison for burning down a mosque, and a grand jury indicted a defendant in June for setting fire to three African-American churches in Louisiana.

As noted above, the Justice Department has charged more than 55 defendants with committing bias-motivated crimes and has obtained convictions against more than 50 defendants since January 2017 (with some cases still pending).  These cases include several involving attacks or threats against houses of worship and against individuals because of their religion.

Most notably, in January, a grand jury returned a 63-count indictment of the alleged Pittsburgh shooter for the mass murder of Jewish worshipers at the Tree of Life synagogue.  The Justice Department is continuing to prosecute that case, including seeking the death penalty for the attacker In addition, in May, we obtained a 113-count indictment of the individual who allegedly fatally shot and wounded worshipers at the Chabad of Poway synagogue in California and who attempted to burn a nearby mosque.

We also use our law enforcement resources to identify situations of concern before violence and injury happen.  In 2018, the Justice Department secured the convictions of three men who conspired to bomb an apartment complex in Kansas where large number of Somali immigrants lived.  In 2017, the Department won the conviction of a man who burned down a mosque in New York. The defendant received a sentence of 23 years.

We also seek to be more effective in combating hate crimes.  We therefore established a Hate Crimes Enforcement and Prevention Initiative, which coordinates our efforts to fight against hate crimes by facilitating training, outreach, and education to law enforcement agencies and the public.  This initiative has already held a series of seminars and roundtables to promote best practices across the country. We remain focused on improving our collection of data on hate crimes and training hundreds of law enforcement agencies across the country to improve reporting.

According to data reported to the Federal Bureau of Investigation (FBI), hate crimes have been increasing each year since 2014.  Some of this may be attributable to the amplified levels of reporting across the country by law enforcement agencies and other factors, including increased awareness.  However, any increase in hate crimes is too high, and we must continue our efforts to eradicate these disturbing crimes. In particular, according to the FBI’s 2017 Hate Crime Statistics, 58.1 percent of crimes based on religious bias in the United States were committed by individuals alleged to have an anti-Jewish bias, a 37 percent increase over the prior year’s statistics.  In order to address this trend, the Department of Justice held a Summit on Combating Anti-Semitism on July 15th that featured discussion among government officials, academic experts, media commentators, and Jewish community representatives. In his opening remarks at the Summit, Attorney General William Barr stated,

I am deeply concerned about the rise in hate crimes and political violence that we have seen over the past decade.  And this trend has included a marked increase in reported instances of anti-Semitic hate crimes. We can all agree this trend is intolerable. We must have zero tolerance for violence that is motivated by hatred for our fellow citizens whether based on race, sex, or creed. . . .  As Attorney General and a fellow citizen, I want to assure the Jewish community that the Department of Justice and the entire federal government stands with you and will not tolerate these attacks.

To address increased security concerns related to hate-based violence, the Justice Department has been hosting a series of Protecting Houses of Worship Trainings across the United States that include participation from the Federal Emergency Management Agency, the U.S. Department of Homeland Security, and civil society actors such as the Anti-Defamation League.  The trainings increase the capacity of faith-based leaders and community members to understand hate crimes, identify perpetrators, prevent and respond to active shooter situations, and secure places of worship.  The Justice Department also hosts community meetings to address hate crimes, including an August meeting in Washington D.C. that focused on outreach efforts to the LGBTI community.