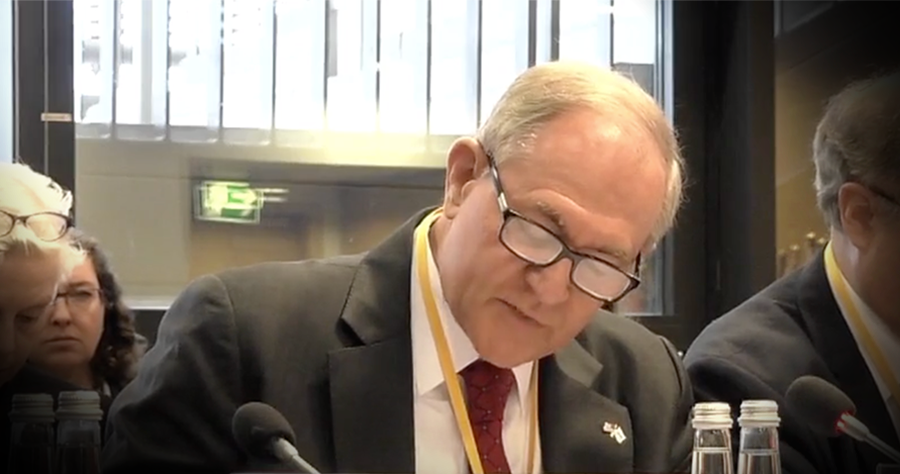 HDIM 2019 Working Session 10: Rule of law I, including:
Independence of the judiciary, Democratic law-making, Ensuring equal enjoyment of rights and equal participation in political and public life

As prepared for delivery by Ambassador James Gilmore III, Head of Delegation
to the 2019 Human Dimension Implementation Meeting,
Warsaw, September 23, 2019

Independence of the judiciary is deteriorating in a number of OSCE participating States, which undermines democratic institutions and hampers efforts to prevent corruption and abuses of political power.

In Russia, the executive branch and security services wield extensive influence over the judiciary, and overly broad anti-terrorism statutes give wide berth to politically motivated prosecutions.  The NGO Memorial has documented more than 300 political prisoner cases. The judiciary’s subjugation to powerful political interests means those responsible for state-sanctioned crimes, including political assassination and large-scale corruption, enjoy near total impunity.  The United States regrets the Russian Federation’s unwillingness to engage meaningfully with the OSCE’s Moscow Mechanism Mission, which found credible evidence that Chechen authorities committed serious and systematic human rights violations and abuses with total impunity, including torture and extrajudicial killings, between January 2017 and December 2018.  We urge Russian authorities to respond to the Mission’s recommendations, particularly since credible new information came to light this summer to corroborate the reports of the extrajudicial killings of at least 27 men in in Groznyy in January 2017 and the torture of at least 14 more.

Russia’s ongoing aggression in eastern Ukraine and its occupation and purported annexation of Crimea have undermined the rule of law in these areas.  We urge the Russian Federation to unconditionally release Crimea Tatars imprisoned on false terrorism charges, including 24 Crimea Solidarity activists arrested in March.  Their true offense was their objection to the occupation. Abuses also characterize Russia’s decade-long occupation of Georgian territory, where Russian-backed de facto authorities have failed to credibly investigate the deaths of ethnic Georgians in their custody, including Irakli Kvaratskhelia this March.

The United States encourages the recently elected governments in Armenia and Ukraine to use their mandates to foster reforms that will advance judicial independence and professionalism and strengthen the fight against corruption consistent with due process.  We urge Georgia to conduct fair and transparent nomination and appointment processes for Supreme Court judges.

In Azerbaijan, judges do not function independently of the executive branch.  Although President Aliyev in March released over 50 individuals widely considered to be political prisoners, an even larger number remain incarcerated according to respected human rights activists.  Courts often fail to investigate allegations of torture and inhumane treatment of detainees in police custody.

In Poland, authorities have adopted measures that some claim limit the scope of judicial independence.  A newly created extraordinary appeals chamber is empowered to reopen any final court ruling dating back to October 1997, undermining a core element of the rule of law: the finality of judgments.

In Romania, the United States is concerned by modifications to legislation and the judicial system that impinge on the independence of the judiciary and curb rule of law.  These legislative changes could make it more difficult to investigate and prosecute crimes, including corruption, and further undermine the institutions that uphold rule of law and good governance.

In Hungary, reports of political pressure on judges by senior members of the government have increased.  In 2018, the National Judicial Council adopted a report that said the National Office for the Judiciary president – who maintains broad executive authority to manage the courts – did not always comply with the law when appointing judges and court executives.  The prime minister and other senior members of the government publicly criticized court decisions, including some that remained open for appeal.

The United States regrets the continued lack of effort by Serbia’s current leadership and the War Crimes Prosecutor’s Office to attain justice for three American citizens—the brothers Ylli, Agron, and Mehmet Bytyqi—brutally killed in Interior Ministry custody in July 1999.  We are disturbed that a leading suspect enjoys impunity because of his close ties to Serbian leadership as well as by the increasingly belligerent and dismissive statements by high-level Serbian officials who once promised action.

In Turkey, the United States welcomes the release of American citizen Andrew Brunson and acknowledges the release of American citizen Serkan Golge, and U.S. consulate employee Hamza Ulucay from prison, while strongly condemning the convictions by all three on groundless terrorism charges.  We urge that exit bans on Golge and Ulucay be swiftly lifted. The United States reiterates its strong concern with the prosecution of consulate employees Metin Topuz and Mete Canturk on similar charges; we have seen no evidence to support these baseless and unjustified charges and call for their cases to be resolved in a manner that is swift, fair, and transparent.  These cases, along with mass dismissals of judges and prosecutors, demonstrate the deterioration in fair trial guarantees in Turkey, particularly since 2016, which has resulted in tens of thousands facing trial without a presumption of innocence or a sufficient evidentiary standard to establish guilt beyond a reasonable doubt. The United States calls on Turkey to cooperate with ODIHR in the continued development and implementation of its recently announced Judicial Reform Strategy to restore the right to a fair trial.

Tajikistan uses counter-extremism laws to eliminate political pluralism.  We deplore the politically motivated detention of defense lawyers, such as Buzurgmehr Yorov, whose trial was rife with procedural irregularities.

In the Kyrgyz Republic, the United States is concerned about the nearly decade-long detention of human rights activist Azimjon Askarov, who is suffering from chronic illnesses that have been exacerbated by his imprisonment.  We regret a recent provincial court decision that denied his appeal for release amid procedural irregularities.  Neither the defendant nor his lawyer was able to attend the closed-door proceedings. We urge Kyrgyzstani authorities to urgently consider releasing Askarov to a third country for medical treatment.

We are concerned about the judicial process in Kazakhstan that resulted in the conviction and sentencing of Maks Bokayev to five years in prison for his alleged role in organizing peaceful demonstrations in the spring of 2016.

The United States commends Uzbekistan’s ongoing judicial reform efforts and encourages authorities to implement changes in close coordination with ODIHR.  As part of this process, we urge greater transparency concerning prisoners detained under the country’s overbroad terrorism statute.  The government should review the cases of those subjected to politically motivated prosecutions; review all cases for compliance with international rule of law standards, including those detained on overbroad religious extremism charges; and continue to undertake meaningful reforms of the nation’s criminal and criminal procedure codes that support an independent judiciary and a level playing field between prosecutors and defense attorneys.

Uzbekistan’s large-scale urban renewal projects have resulted in forced evictions and the demolition of homes.  We call on the authorities to safeguard Uzbekistan’s cultural heritage, respect human rights and individual property rights, and ensure proper compensation consistent with the 1990 Bonn Document.