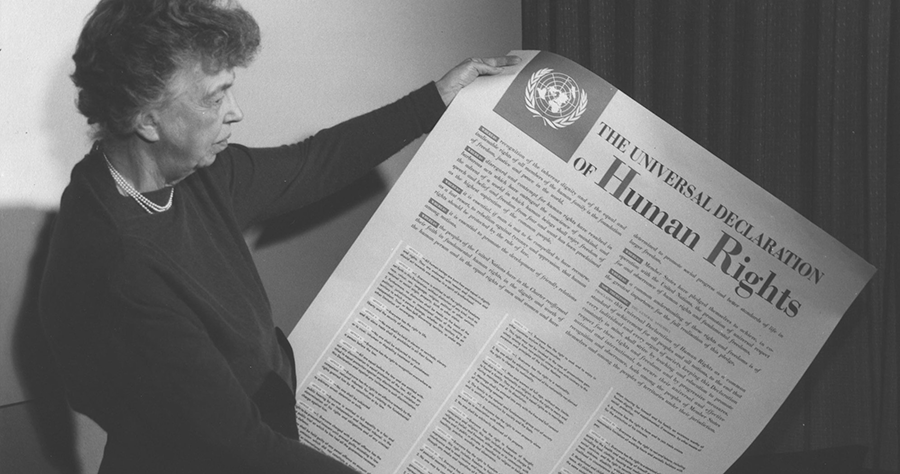 December 10 marked the 73rd anniversary of the United Nations General Assembly’s adoption of the Universal Declaration of Human Rights.  Former First Lady Eleanor Roosevelt, as chair of the UN Human Rights Commission, helped spearhead the creation of this landmark document, which has been fundamental in promoting human rights for all.  This was true when it was adopted in 1948 and remains true today.

As the Biden-Harris Administration has emphasized, promoting respect for human rights is at the center of U.S. foreign policy.  As the world confronts genocide and other atrocities; systemic racism and inequity; erosion of respect for freedom of expression and other fundamental freedoms; and oppression and marginalization because of one’s race, ethnicity, gender, religion, sexual orientation or gender identity, among many other human rights abuses, the Universal Declaration of Human Rights is more important than ever.

No region has a perfect record on human rights, and the OSCE region has its share of challenges.  The United States is particularly troubled by Russia’s ongoing efforts to forcibly close International Memorial and Memorial Human Rights Center, two key branches of one of Russia’s oldest and most-respected human rights organizations.  Civil society organizations are critical partners and help us all to implement our OSCE commitments.  International Memorial and its constituent chapters do important work uncovering and preserving the truth about Soviet repression, particularly under Stalin, and honoring the memories of those lost.  Memorial Human Rights Center advocates for human rights in Russia today, maintains a comprehensive database of current political prisoners in the country, and has extensively documented human rights abuses in the North Caucasus region, particularly in Chechnya.  Against this backdrop, we again call for the release of Yuri Dmitriev, the 65-year-old historian and former Memorial branch leader, who was handed an outlandish 13-year sentence last year on spurious charges.  We urge Russian authorities to immediately cease their harassment of Memorial and its members.

Beyond Russia, as Secretary Blinken pointed out in his remarks at Stockholm, democratic institutions, values, human rights, civil society, independent media, and the rule of law are under serious pressure in the OSCE region.  Since this time last year, the number of individuals unjustly incarcerated by participating States for exercising their human rights and fundamental freedoms has continued to grow.  Despite the 2020 Tirana Decision to prevent and eradicate torture and other cruel, inhuman or degrading treatment or punishment in the region, this appalling practice persists, and in some cases as in Belarus has increased.

While the new prosecutions and incarcerations tend to attract attention, we should not and will not forget those who have long suffered politically motivated imprisonment.  In particular, I call on the government of Turkmenistan to account for all those who disappeared into its prison system, some almost two decades ago, including Turkmenistan’s former Permanent Representative to the OSCE Batyr Berdiyev.  Turkmen authorities need to immediately provide information on, and access to, all prisoners and ensure families have information on the whereabouts and well-being of their relatives, including their current place of detention.

We call for an end to such deplorable mistreatment and for the immediate and unconditional release of all those unjustly held in the OSCE region for, as the Helsinki Final Act puts it: “knowing and acting upon their rights.”

In closing, on this day, we honor the tremendous importance and achievement that is the Universal Declaration of Human Rights.  We continue to strive to uphold human rights and human dignity across the globe.