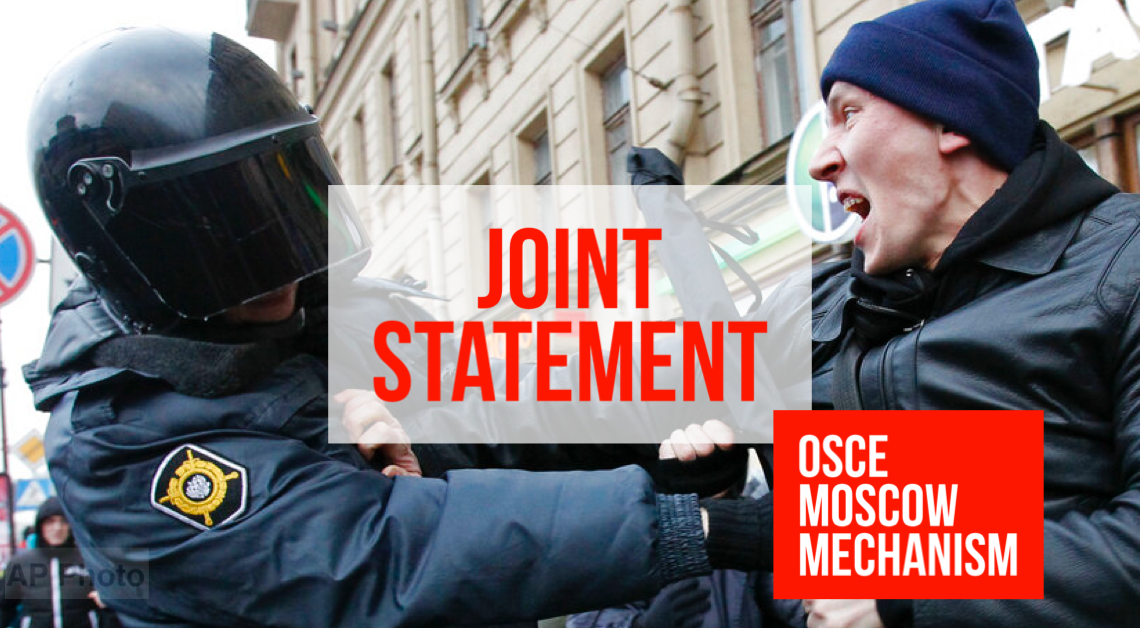 The Russian government and administration not only excessively limit human rights and fundamental freedoms, but actively work to their detriment to propagate the war. (AP PHOTO)

As delivered by Ambassador Anne-Marie Calla, Permanent Representative of Ireland to the OSCE
to the Permanent Council, Vienna
September 22, 2022

Professor Nußberger, on behalf of the invoking States I wish to thank you for your work as Rapporteur under the OSCE’s Moscow Mechanism. We are most grateful for your professional and meticulous approach to your mandate, for the thorough methodology that you have applied and for the substantial report which you have produced. Your integrity and dedication to human rights and fundamental freedoms are evident in your report. We hope that all 57 participating States to the OSCE will do justice to your report by considering carefully your findings and recommendations, which are addressed not only to the Russian Federation but also to OSCE participating States and the wider International Community.

Mr Chair, we invoked the Moscow Mechanism because we identified the situation in the Russian Federation as a particularly serious threat to the fulfilment of the provisions of the OSCE human dimension as set out in various documents. The mandate provided was substantial, reflecting the scope and severity of the alleged human rights violations and abuses.

It is clear from the report that we were right to be concerned. The report is based on in-depth analysis of Russian Federation legislation, extensive documentation, including decisions by the European Court of Human Rights, opinions by the Venice Commission, statements by the autonomous institutions of the OSCE and other international organizations, and reports and testimonies by civil society. Regarding the legislative changes in the realms of freedom of association, freedom of expression, and freedom of peaceful assembly, the report concludes, “Russian legislation is obsessed with restricting these rights more and more. […] Russian legislation in this area is clearly incompatible with the rule of law. On the contrary, the multitude of detailed provisions gives the authorities wide discretionary powers and thus provides the basis for arbitrariness.” The report goes on to shed light on the correlation between peaceful protest and repressive legislation, “Whenever there were mass protests […], new restrictive laws followed.”

The report provides us with some answers as to why the Russian Federation clamps down on human rights and fundamental freedoms. “Ultimately, it is about integrating civil society into the vertical of power.”

Silencing civil society puts Russia’s authorities in a position in which they deem themselves free from answering to citizens. In addition, with its clampdown on human rights and fundamental freedoms, the Russian Federation has helped prepare the ground for its war of aggression against Ukraine. The report outlines Russian government thinking: “restrictive measures are considered necessary in order not to be disturbed during the preparation for war or after it has started. This explains the wave of repressive measures in Russia immediately before, but, above all, after 24 February 2022.”

Mr Chair, the Russian government and administration not only excessively limit human rights and fundamental freedoms, but actively work to their detriment to propagate the war. In that context, the report analyses speeches delivered by President Putin that call civil society the “fifth column” and de-humanise those considered to be enemies, thus revealing “an attitude of deep-seated hatred”.

The report also cites several astonishing examples of pressure in opinion formation, for instance towards students and artists, and of excessive violence against critical civil society activists, journalists, and other media actors, such as the case of Grigory Yudin, political scientist and sociologist. “On 24 February 2022, he was arrested during an anti-war protest in Moscow and severely beaten in a police van, until he lost consciousness. Many more cases have been documented by human rights organisations who claim that the degree of violence has considerably increased – many interviewees drew a parallel to the violent suppression of protest in Belarus.”

Not all violence is committed by state representatives, the report points out, but it goes on to state that “[t]he Russian State implicitly supports this development through its lack of protection and its ineffectiveness in freedom-of-speech related cases.”

Freedom of expression is also particularly affected by the war. “Especially the extension of espionage […] and therefore of “high treason” […] under […] the Criminal Code […] makes journalistic work during the ongoing war of the Russian Federation against Ukraine impossible.”

Importantly, the report sheds light on the specific ramifications for women and members of the LGBTQI+ community. For instance, the report describes gender-based violence against women protestors. Women “are in an especially vulnerable position, especially if they are detained alone. Sexualized violence is a relatively new phenomenon, more noticeable since February 2022.”

Mr Chair, colleagues, “repression on the inside and war on the outside are connected to each other as if in a communicating tube.” May this conclusion of the report be a lesson and warning to all of us. It is a timely reminder of one of the cornerstones of the 1975 Helsinki Final Act on the universal significance of human rights and fundamental freedoms, respect for which is an essential factor for the peace, justice and well-being. What is at stake is nothing less than the OSCE concept of comprehensive security. It is our common duty to properly defend the values and principles of this organization.