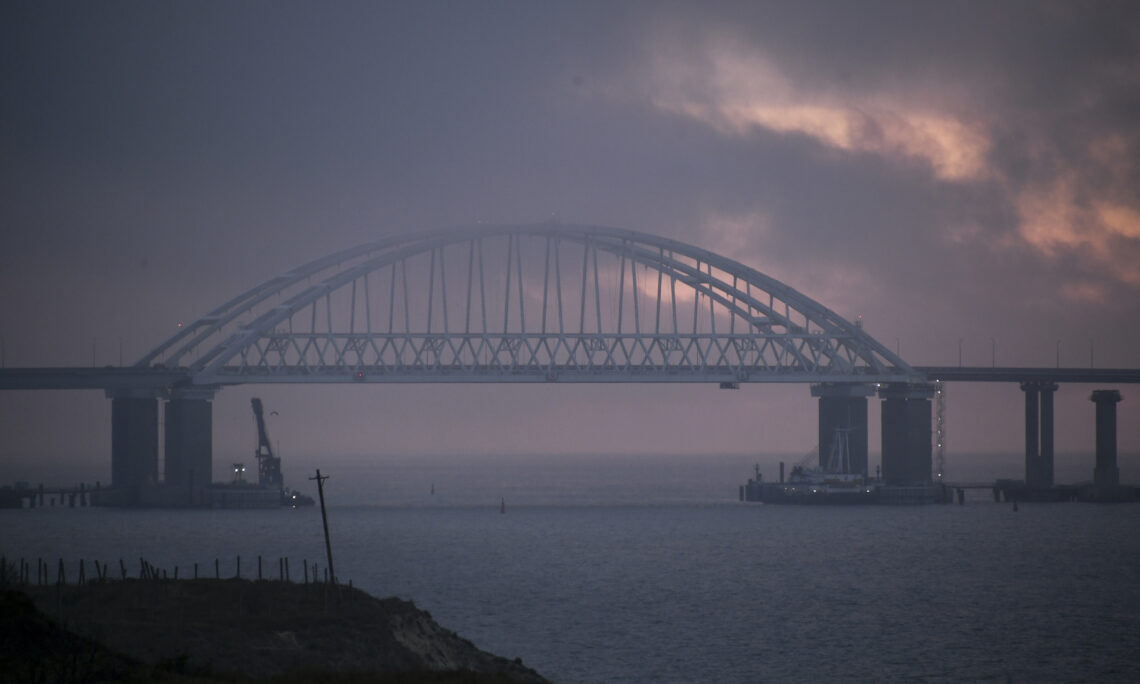 The Kerch Bridge spans the opening for the passage of ships, near Kerch, Crimea, Ukraine (AP Photo, File)

The United States shares Ukraine’s concerns over Russia’s most recent provocation in the Black Sea, this time impeding maritime traffic through the Kerch Strait in order to facilitate its continued military buildup.

Russia’s continued occupation and militarization of the Crimean Peninsula has implications far beyond Ukraine’s borders; it threatens Transatlantic security.

On April 15, the United States is imposing sanctions on five individuals and three entities associated with Russia’s ongoing occupation of and repression in Crimea. Several of these individuals and entities have recently been sanctioned by the European Union, United Kingdom, Canada, and Australia.

These actions are a response to the construction of the Kerch Strait bridge that seeks to strengthen Russia’s hold on Crimea, as well as abuses perpetuated by Russia against Ukraine on the Crimean Peninsula. The United States and its Allies will continue to impose costs on Russia and its proxies until Russia ends its aggression in eastern Ukraine and its occupation of Crimea.

Our coordinated actions with allies demonstrate our unwavering commitment to hold Russia accountable for its violations of Ukraine’s sovereignty, territorial integrity, and international law. Our sanctions impose additional costs on Russia for its aggressive actions against Ukraine and highlight the abuses that have taken place under Russia’s occupation of Crimea.

Following Russia’s seizure, occupation, and attempted annexation of Crimea in 2014, Russia sought to connect the Russian mainland to the Crimea region of Ukraine, which is separated from Russia by the Kerch Strait. In 2016, Russia began the construction of a road and railway bridge over the Kerch Strait. With our international partners, the United States has continued to take targeted actions against persons involved in this project, undertaken by Russia to undermine the sovereignty and territorial integrity of Ukraine.

April 15th’s actions also targeted three Russian officials and a local official involved in Russia’s occupation of and efforts to control and govern the Crimea region of Ukraine. These bureaucrats are critical to the Russian government’s malign effort to exercise authority within Ukrainian territory following Russia’s illegal seizure of Crimea.

Since occupying Crimea, Russian authorities have carried out a brutal campaign of repression against Crimean Tatars, ethnic Ukrainians, and members of other minority ethnic and religious groups in Crimea. Russia’s repression has left Crimean residents in a constant state of fear, unable to live their lives freely.

We condemn Russia’s abuses on the peninsula. We call on Russia to immediately end its occupation, release all Ukrainian prisoners it unjustly holds, and return full control of the peninsula to Ukraine. Crimea is Ukraine.