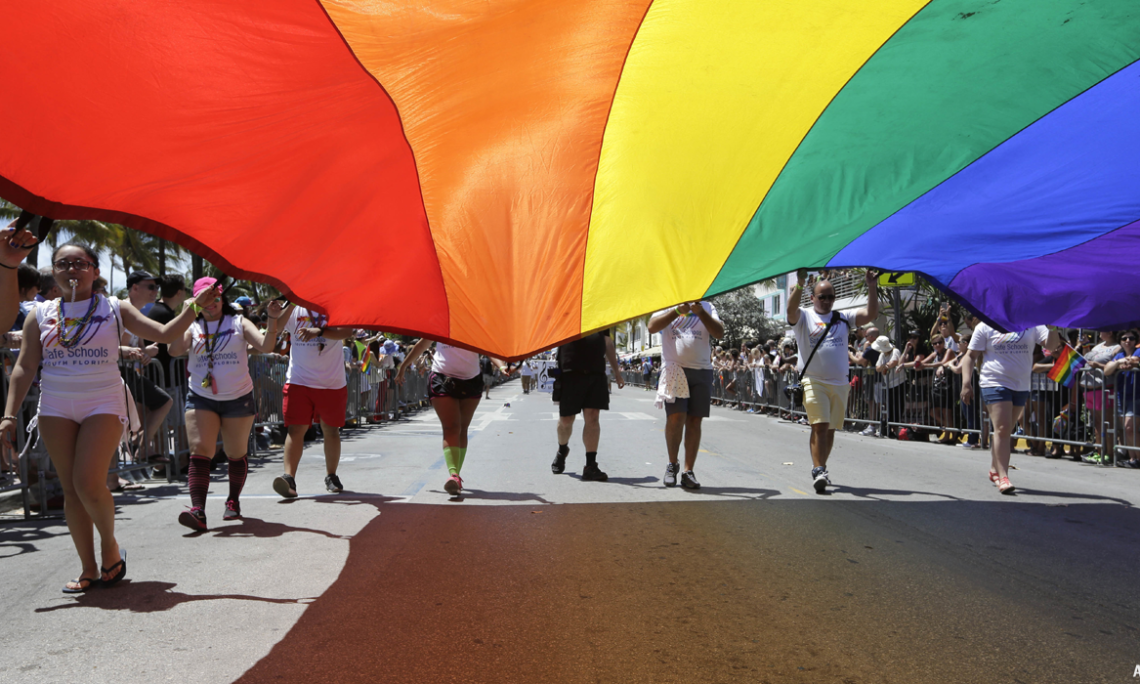 In Observance of Pride Month

I am delivering this statement on behalf of the United States, the United Kingdom and Canada.

Unfortunately the human rights of LGBTQI+ persons remain vulnerable or actively violated in far too many places.  LGBTQI+ status or conduct is still illegal in 70 countries around the world including two OSCE participating States.  In far too many parts of the world being lesbian, gay, bisexual, trans, intersex, or simply gender non-conforming means that even the most basic of daily activities such as going to work or to the doctor’s office can result in violence, harassment and deep social exclusion.

These are human rights abuses – and we are committed to working towards human rights for all.  Human rights are indivisible.  Whenever one group of people is targeted, all vulnerable groups are less safe.  And whenever one group’s rights are protected, all of society can live more freely, secure and prosperous.  That’s why it’s not just enough to stand up for LGBTQI rights at home.  We have to continue, and we will continue, to stand up for equal rights everywhere.

In Russia, Patriarch Kirill blamed LGBTQI+ pride parades in Ukraine as a reason to support Russia’s unprovoked and unjustified war  against Ukraine.  This coincides with the Russian government’s relentless stigmatization of and violence against the LGBTQI+ community.  This year marks a decade since President Putin started his legislative attacks on Russian citizens because of their sexual orientation.  This began in March 2012 with discrimination against LGBTQI+ persons in St. Petersburg and in 2013 this was extended throughout the whole country.  According to Human Rights Watch, after the introduction of the law in 2013, “there has been an increase in the number of attacks on LGBT people throughout Russia, both by individuals and by organized homophobic groups.”

Alarming credible reports emerging from the Russian Federation’s Republic of Chechnya led 16 participating States in November 2018 to invoke the OSCE’s Moscow Mechanism to look into multiple allegations of “serious human rights violations and abuses” that allegedly were committed there during January 2017 to November 2018 against LGBTQI+ persons, human rights defenders, members of the independent media, lawyers and others.  In December 2018, the report resulting from the Moscow Mechanism found that “harassment and persecution, arbitrary or unlawful arrests or detentions, torture, enforced disappearances and extrajudicial executions” had indeed occurred.  The report also found “a climate of impunity” surrounding such violations and abuses.

Russia failed to investigate any of the human rights abuses identified in the Moscow Mechanism report.  And chilling reports have continued to emerge of further, appalling abuses and violations of human rights being committed in Chechnya with impunity.

Instead of seeking to protect the human rights of LGBTQI+ persons, Russia is actively curtailing their human rights even further, and in April 2022, it dissolved the Russian LGBT Network, Russia’s most prominent LGBT organization.  Russia’s stigmatization of LGBTQI+ persons is extending to parts of Ukraine held by Russia, where local activists report that LGBTQI+ activists are disappearing.

Mr. Chair, this month, as the human rights of LGBTQI+ persons are under threat throughout the OSCE region, we honor the resilience of LGBTQI+ people, who are fighting to live authentically and freely.  We reaffirm our belief that LGBTQI+ rights are human rights.  We applaud the progress in recognizing the human rights of LGBTQI+ persons made by participating States across the OSCE region this past year, countering the narrative of a supposed East/West divide on LGBTQI+ rights.  We remain committed to ending violence and discrimination on the basis of sexual orientation, gender identity or expression, and sex characteristics.  We speak out because equality and equity build stronger societies for all.