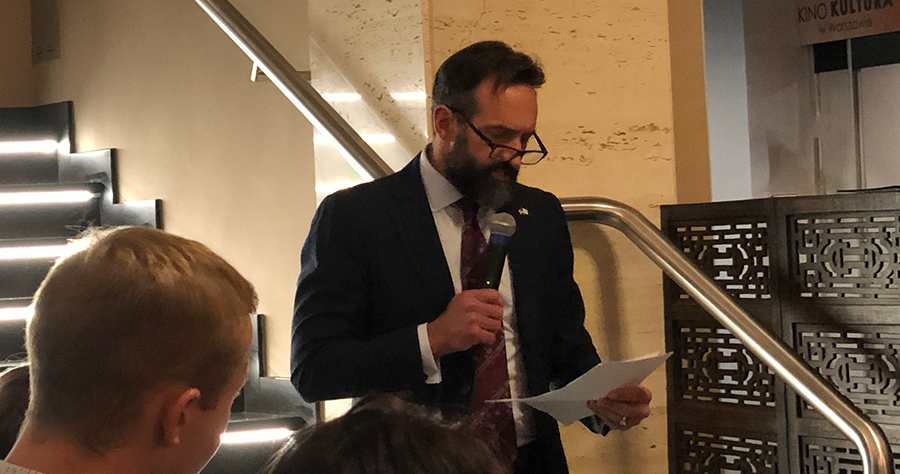 Introductory Remarks for the Film Screening of “Love, Sonia”

The United States is pleased to cosponsor this ODIHR event. Raising awareness of trafficking in persons is an important means to help prevent it. As you watch this film tonight, I would like you to keep in mind an issue that the United States believes is extremely important: ensuring that efforts to combat trafficking in persons include a trauma-informed and victim-centered approach. This concept was adopted by the OSCE participating States in decisions on combating human trafficking at the Vienna Ministerial in 2017 and the Milan Ministerial in 2018. But what exactly does “trauma informed” mean and why is it important?

Survivors of trafficking often experience complex trauma, which is the exposure to multiple traumatic events, often of an invasive, interpersonal nature, with wide-ranging and long-term effects. Trauma can disrupt the rational thought process and impair the ability to handle stress, perceive when a threat is in the past, and manage emotions. Victims often experience re- traumatization when they are “triggered” or have flashbacks or intrusive thoughts that replicate the experience of their initial trauma. A survivor who may appear to be uncooperative, combative, or difficult could be experiencing such overwhelming symptoms related to trauma. It is also important to recognize that maladaptive behaviors, including risky behaviors such as drug or alcohol abuse, can be part of an individual ‘s survival mechanisms.

Law enforcement officials, prosecutors, service providers, and other allied professionals will likely observe a wide range of reactions related to trauma during the course of their work with survivors. Understanding the reason behind a survivor’s actions will contribute immensely to building rapport and trust, whether preparing a victim-witness for trial or providing appropriate services.

Being trauma-informed is a strengths-based approach that is responsive to the impact of trauma on a person’s life. It require recognizing symptoms of trauma and designing all interactions with victims of human trafficking in such a way that minimize the potential for re-traumatization. In particular, this approach emphasizes creating physical, psychological, and emotional safety and well-being to address the unique experiences and needs of survivors.

Additionally, trafficking survivors share that one of the most important steps to being trauma-informed is to be survivor informed. A survivor-informed practice includes meaningful input from a diverse community of survivors/ at all stages of a program or project. Whenever possible, law enforcement officials, prosecutors, service providers, and other allied professionals should solicit feedback from survivors on organizational policies and programming.

The U.S. government is therefore implementing new ways to leverage input from human trafficking survivors to inform its federal policies and programs. In March 2018, President Trump appointed nine such members to the United States Advisory Council on Human Trafficking.

At the 2018 Alliance against Trafficking in Persons Conference, we had the privilege of listening to the presentation of Flor Molina, a human trafficking survivor and one of the appointed members of the U.S. Advisory Council on Human Trafficking. Ms. Molina explained that the Council, established in 2015, represents a diverse range of human trafficking survivors across the United States. These experts review government policies and make recommendations, serve as a point of contact for federal agencies reaching out to survivors for input on programming and policy, and publish an annual report that contains their findings.

The United States is excited to hear that ODIHR is considering establishing its own advisory council with human trafficking survivors. This would be the first such council working with an international organization, and would present a tremendous opportunity to heighten the OSCE’s effectiveness and address more effectively the harsh realities of human trafficking that only survivors can fully understand.

I look forward to the discussion following the movie screening.