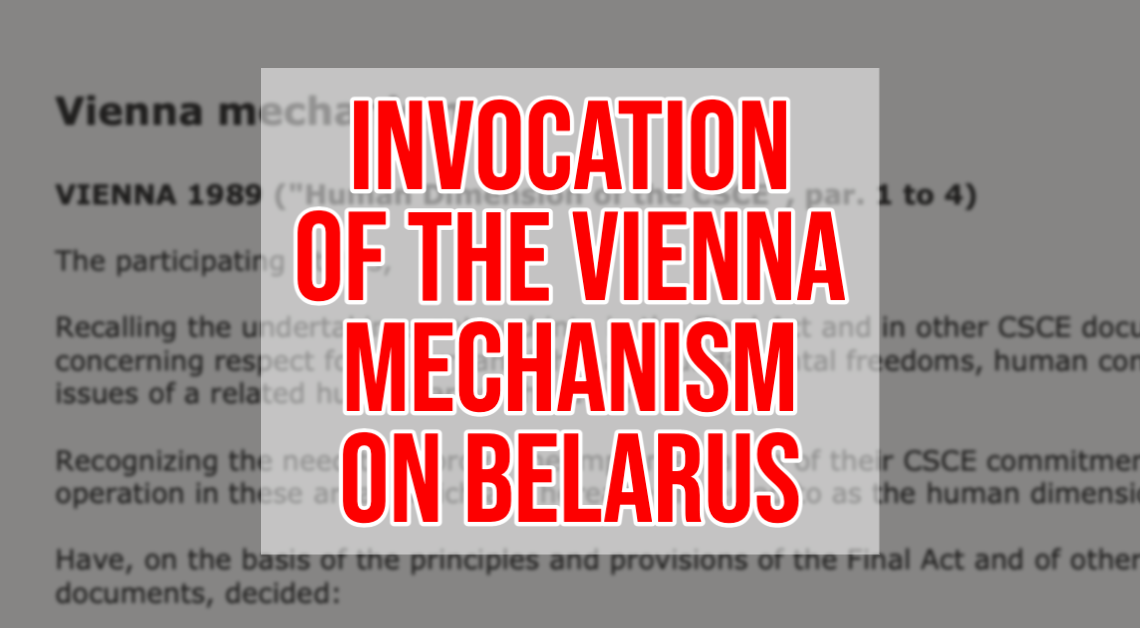 Invocation of the Vienna Mechanism on Belarus

Invocation of the Vienna Mechanism on Belarus

The United States fully aligns with the joint statement delivered by the United Kingdom.  I would also like to add a few words in my national capacity.

We remain deeply concerned by the Lukashenka regime’s continued repressive actions to silence dissent and crack down on civil society, as evidenced by decisions taken last week.  The October 29 decision to strip political prisoner Viktar Babaryka’s last remaining lawyer, Yauhen Pylchanka, of his license due to alleged legal violations during the trial, is troubling.  The regime has repeatedly concocted false allegations as a pretext to strip lawyers of their licenses in retaliation for their representation of opposition activists, peaceful protestors, and other Belarusians targeted for reprisal by the Lukashenka regime.  The Belarusian Interior Ministry’s October 29 decisions to designate popular social messaging channels NEXTA, NEXTA-Live, and LUXTA as “extremist”, the blocking of access to German broadcaster Deutsche Welle and the Current Time TV in Belarus, and the regime’s general failure to meet Belarus’s obligations to protect freedom of expression, including for members of the media, are also concerning.  The authorities have threatened to charge with criminal extremism all of the over one million subscribers to social media channels that the Lukashenka regime has designated as “extremist.”  The charge carries a penalty of up to seven years in prison — another appalling attempt to intimidate the public.  We also protest the November 1 arrest and jailing of Belsat journalist Iryna Slaunikava and her husband Alyaksandr Loyka.

The Belarusian authorities’ recent decision to close the U.S. Embassy’s public affairs and the U.S. Agency for International Development (USAID)’s offices in Minsk indicates yet another step away from engagement with democratic governments. We call for the immediate, unconditional release of all political prisoners and urge Belarus to engage constructively with the international community, including by providing substantive responses to the questions posed using the Vienna Mechanism.