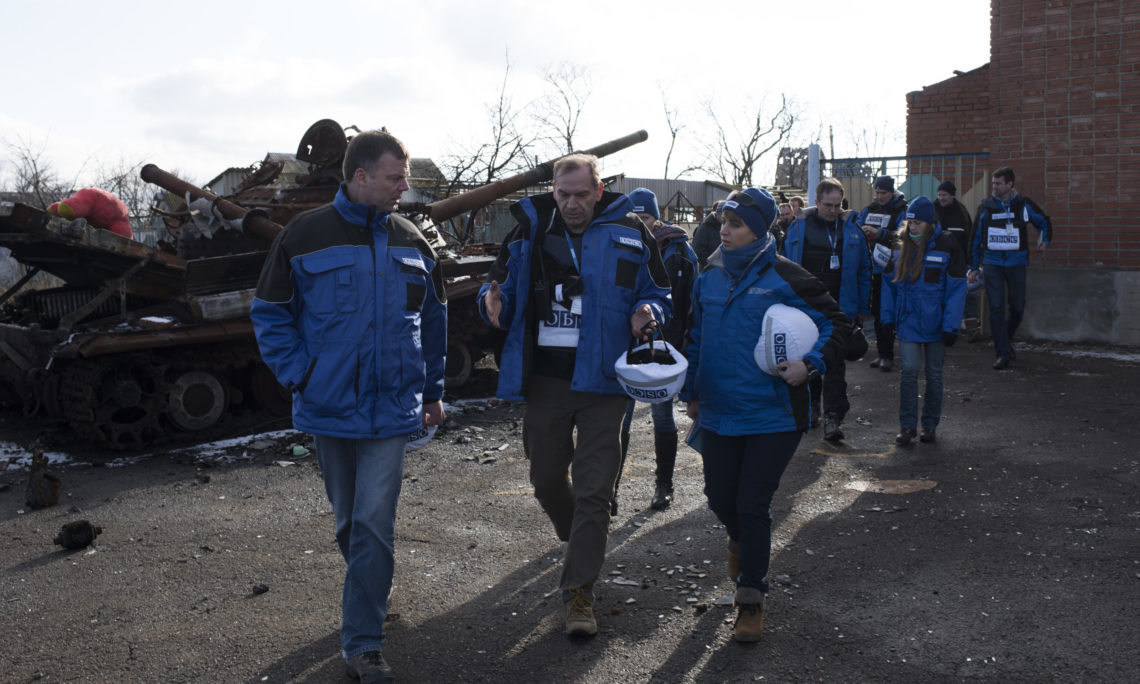 Monitors from the OSCE Special Monitoring Mission to Ukraine conducting a foot patrol in Kominternove on January 15, 2016. (photo: OSCE/Evgeniy Maloletka)

The New Year offers the chance to intensify our efforts to implement Minsk and resolve the conflict in eastern Ukraine. We welcome the extension of the Minsk agreements into 2016, but stress that the Russian Federation must implement its Minsk commitments, including honoring the ceasefire, granting unimpeded access to SMM monitors, facilitating agreement on election modalities, allowing ODIHR-compliant elections to take place in areas of the Donbas, withdrawing all foreign forces and equipment from eastern Ukraine, and returning control of the international border to the Ukrainian Government. It is important for Ukraine to pass constitutional amendments that will give special status to the Donbas, as well as pass a bill to allow for elections in the special status areas in accordance with the Minsk agreements. Ukrainian civilians suffer the most from ongoing fighting, particularly civilians in Donbas, where access to food and medicine is restricted by the separatists’ ban on humanitarian organizations. As long as the conflict continues, our collective security remains at risk.

The United States fully supports the swift resolution of the conflict in Ukraine, one that fully respects Ukraine’s sovereignty, independence, territorial integrity, and freedom to determine its own future. The full implementation of the Minsk agreements remains the best hope for this outcome. Progress in implementing these agreements requires strict adherence to the ceasefire and full support and access for the OSCE Special Monitoring Mission to Ukraine.

Despite a lull over the holidays, fighting has worsened in the last few weeks. We have also seen a surge in incidents in which the SMM was denied access to areas within the conflict zone: 76 incidents from November to early January. Of these, more than 80 percent of all incidents were carried out by separatist forces. Visits by the SMM to the international border in separatist-controlled Luhansk were especially restricted, with separatists stopping the SMM more than half the time and completely cutting off access to the Izvanye border crossing. Separatist forces appear intent on hiding from the SMM – and by extension the international community – the level of military support they receive from Russia.

In this regard, we again emphasize the connection between border monitoring and ceasefire monitoring. Today, the Permanent Council extended the mandate of the OSCE Observation Mission at two Russian border checkpoints. We agree with Chairman-in-Office Steinmeier’s observation that this restricted mandate means the Observer Mission is unable to provide a complete picture of the situation in eastern Ukraine. The Russian Federation has repeatedly said it agreed to the deployment of the Observation Mission as a “goodwill gesture,” and we heard that again today. This may have been Russia’s original explanation in July of 2014, but in September of that year, in the Minsk Protocol, Russia plainly committed to monitoring on the state border and to a security zone in the border areas of Ukraine and Russia. That is a commitment, not a gesture. And I’d like to – in the spirit of rebuilding trust and engaging in dialogue – I’d like to point out to colleagues who listened to the statement of our distinguished Russian colleague upon the adoption of the decision today, that what he said wasn’t strictly speaking false, but it was misleading. He said that the Minsk Protocol “makes no mention of OSCE observers on the Russian side of the border.” It’s true that it makes no mention of OSCE observers on the Russian side of the border, but let me recall what it does say. Point four says: “Ensure permanent monitoring on the Ukrainian-Russian state border, and verification by the OSCE, together with the creation of a security area in the border regions of Ukraine and the Russian Federation.” Now, when we say there should be monitoring of the border, we have often heard our distinguished Russian colleague say: “We have no control over the separatists.” I don’t think that’s true. But if it is the case that the Russian Federation has no control over the separatists that it backs in Ukraine, then clearly the only way for the Russian Federation to enable there to be implementation of point four – that is to say, permanent monitoring of the international border – is for the Russian Federation to accept the call by many of us to expand the border observation at the two checkpoints to cover the entirety of the border. The Russian Federation should also provide full transparency and full support for the OSCE missions charged with contributing to the diplomatic efforts toward a peaceful resolution to the conflict.

We have witnessed a spike in hostile acts against the SMM. Just five days ago, on January 16, a SMM vehicle came under small arms fire in Marinka; the shots were fired from the direction of separatist positions. On January 8 in Horlivka, “DPR” members forced SMM monitors to the ground, searched them, and briefly detained them in a military building. On January 4 near Troitske, “LPR” members threatened to shoot SMM monitors if they did not leave the area. The SMM also came under fire on December 27 near Kominternove. On December 25, “LPR” members aimed their weapons at an SMM team flying a UAV and threatened to harm a monitor if he did not delete video footage the UAV had taken.

We condemn these acts, which contravene the Minsk agreements and place the lives of monitors from over 45 participating States at risk. These acts are deliberate and aimed at intimidating SMM monitors, so as to prevent them from completing patrols and conducting future observations in separatist-controlled territory. The OSCE should send a signal that hostility against the SMM is indefensible and unacceptable. The SMM deserves our support – not just for the sake of our people who put themselves in harm’s way, but because their work is an indispensable part of the solution to this crisis. We should do all we can to support the mission’s safety and security.

At the close of 2015, the sides announced a holiday ceasefire that went into effect on December 23. Sadly, combined Russian-separatist forces disregarded this ceasefire and launched attacks within a few hours, with the SMM registering explosions resulting from shells clearly coming from separatist-controlled territory. We reiterate that combined Russian-separatist forces must take steps to uphold the ceasefires they have repeatedly broken. All sides should pull back heavy weapons and cease from moving further into the gray zone. The relative quiet over the holidays, particularly near Donetsk airport – previously the scene of intense clashes – shows that it can be done. The sides should work closely with the SMM on a verifiable withdrawal plan for heavy weapons, and then carry it out.

Heavy weapons must be silenced for legitimate, local elections to take place, without which an end to the conflict will remain out of reach. Until genuinely free and fair local elections are held, Kyiv has no legitimate representatives with whom it can negotiate.  Refusing to work with Kyiv on election modalities leads only to a dead-end for the Minsk process.

As we look to the year ahead, we must not forget how the conflict in Ukraine began: with Russian aggression in and the occupation of Crimea. The occupation must end. We expect the Russian Federation to take responsibility for its violations of international law and defiance of OSCE principles and commitments; 2016 should be the year Russia rejoins the other 56 participating States that respect the sovereignty and territorial integrity of Ukraine.