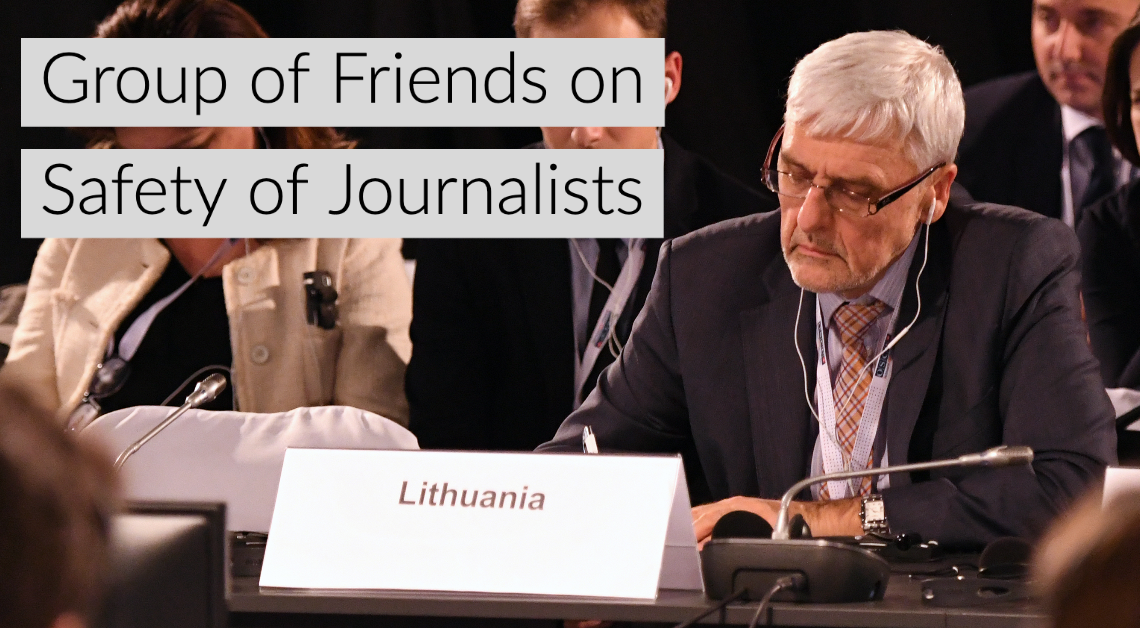 Delivered by the Permanent Representative of Lithuania to the OSCE

I am speaking on behalf of the informal OSCE Group of Friends on Safety of Journalists, composed of the following participating States: Austria, Canada, Denmark, Estonia, Finland, France, Germany, Greece, Latvia, Lithuania, Montenegro, the Netherlands, Norway, Sweden, the United Kingdom, and the United States of America.
I would like to welcome the Representative on Freedom of the Media back to the Permanent Council and warmly thank him for his latest report.

Free, diverse and independent media is a cornerstone of all democratic societies and is essential for comprehensive security. Journalists and other media actors should have a safe and enabling environment in which to work, both online and offline. The right to freedom of expression includes freedom to seek, receive and impart information and ideas through any media and regardless of frontiers.

The Group of Friends commends the RFoM for his focus on the effects of the COVID-19 pandemic on freedom of expression. The rapid response of the RFoM played a role in the repeal, review or withdrawal from consideration by some participating States of laws and regulations which, had they been passed and implemented, would have had a deleterious impact on independent media and the safety of journalists.

On 15 April 2020, the informal OSCE Group of Friends on Safety of Journalists along with members of the other three Groups of Friends on the Safety/Protection of Journalists in New York, Geneva and Paris called on all states to protect journalists’ and media workers’ safety. Free, independent and pluralistic media play an indispensable role in informing the public during the ongoing COVID-19 crisis.

Journalists and media workers are subjected to significant physical and psychological risk by providing frontline reporting on the COVID-19 crisis. They are working under extremely challenging conditions, partly because of lack of sanitary precautions and training, but also because of psychological stress linked to the rapidly evolving situation.

We would therefore like to warmly thank the Representative on Freedom of the Media for keeping the topic of safety of journalists high on the agenda. We are convinced that the situation for journalists in the OSCE region merits our continued attention and engagement. It is time to implement the OSCE commitments adopted in 2018 in Milan on the safety of journalists, also encompassing non-physical aspects of safety.

We remain concerned by the specific risks faced by women journalists in relation to their work. Violence and attacks against journalists have taken a gender-specific turn in recent years, exposing women to particular threats and vulnerabilities. We welcome that the RFoM has highlighted the specific risks women face, particularly in digital contexts.

We would also like to welcome the RFOM’s initial work on artificial intelligence and we look forward to the meeting organised on July 8.

We remain committed to enhancing our efforts to ensure the safety of journalists and other media actors. Through the OSCE and its Representative on Freedom of the Media that we fully support, through other multilateral organisations and mechanisms, and in cooperation with civil society and the media itself, we will continue to work tirelessly to this end.

In this regard, we welcome the joint statement of 19 March published by David Kaye, UN Special Rapporteur on the promotion and protection of the right to freedom of opinion and expression; Harlem Désir, OSCE Representative on Freedom of the Media; and Edison Lanza, Special Rapporteur for Freedom of Expression of the Inter-American Commission on Human Rights.

We agree with their call that governments must be making exceptional efforts to protect the work of journalists at a moment of public health emergency and we remain fully committed to protecting media freedom and safety of journalists at this critical time.