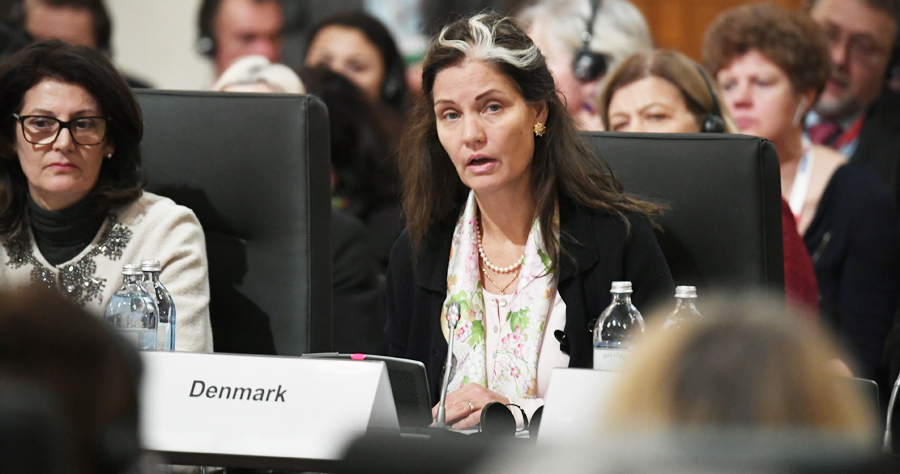 Ambassador Liselotte Plesner of Denmark delivers a joint statement on human rights and fundamental freedoms on behalf of 44 OSCE States, including the U.S., at the closing session of the 2017 OSCE Ministerial Council, December 8, 2017, Vienna, Austria. (USOSCE/Colin Peters)

We make this statement in the same week where we celebrate the anniversary of the Universal Declaration of Human Rights; a collective commitment to recognize and protect the equal dignity, freedom and rights of every human being.

Nearly seven decades later, we deeply regret that we are witnessing a continuing deterioration in some participating States in the exercise and enjoyment of human rights and fundamental freedoms, all of which are essential to the realization of comprehensive security. At the same time, we regret that the participating States were unable to reach consensus on draft decisions addressing these challenges.

As highlighted in the Vienna Declaration adopted by the OSCE Parallel Civil Society Conference, the fight against terrorism and violent extremism must go hand in hand with the respect for human rights and fundamental freedoms.

However, in certain parts of the OSCE region, the space for civil society is rapidly shrinking, both online and offline, and attacks on human rights defenders continue to increase. There are attempts to silence civil society, human rights defenders and free and pluralistic media through restrictive legislation, intimidations, or even violent acts and murder for which those responsible go unpunished. Women and girls continue to face discrimination and violence, and LGBTI persons experience hate crimes and violent ill-treatment.

These policies and practices not only violate or abuse human rights and fundamental freedoms, they are also often counter-productive, as they increase mutual suspicion in society, undermine trust in the rule of law and marginalize vulnerable communities.

For these reasons, we speak out when human rights and fundamental freedoms are violated or abused. Whether it is human rights defenders facing reprisals for their actions, or persons being harassed, bullied or attacked because of who they are, whom they love or what they believe or say. We will challenge harmful stereotypes, combat myths with facts, and speak out against discrimination on all grounds. We recall our commitments and hold ourselves and each other to account. There may be times where we cannot prevent injustice, but there must never be a time when we fail to protest.

We commend all individuals and organizations who work tirelessly to safeguard our commitments on human rights and hold governments accountable for their actions. They deserve our recognition and deepest respect.

Our defense of and support for Human Right Defenders and civil society are not simply a matter of principle. When people can freely exercise their human rights, fundamental freedoms and civil society thrives, and minorities are not marginalized, societies are more resilient and peaceful. When women and girls can pursue unlimited opportunities, a country realizes its full potential. When free and pluralistic media can inform the public, abuses of power, corruption and disinformation are uncovered.

We commend the work of the OSCE autonomous institutions, ODIHR, the HCNM and the RFOM, for their efforts to stand up for human rights, thereby contributing to our common security. Their work, mandates and institutional independence are essential to the promotion and protection of fundamental freedoms and human rights.

We will continue to take forward the principles that underpin the Universal Declaration of Human Rights, the international covenants and the Helsinki Final Act and stand up for human rights, across the OSCE region, and worldwide.

Finally, we also would like to express our sincere appreciation and thanks to the Austrian Chairmanship for its tireless efforts to strengthen the Human Dimension.