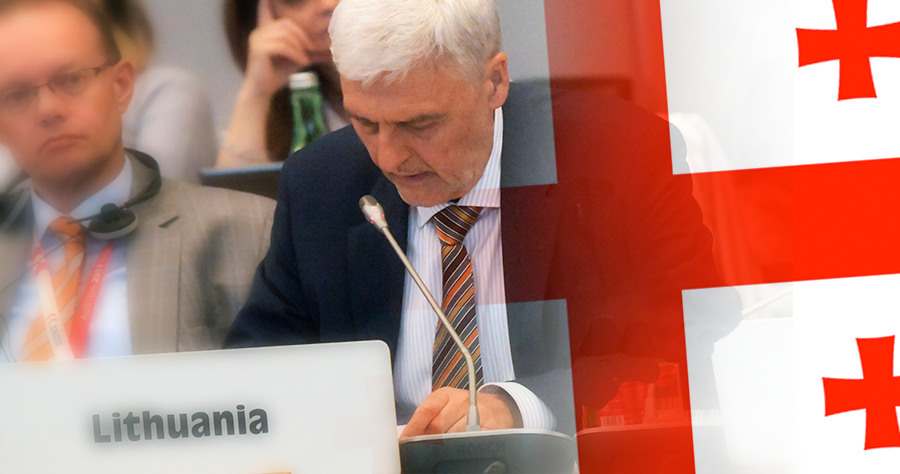 Twelve years since the Russian military invasion of Georgia, we remain deeply concerned over the continued occupation of parts of the territory of Georgia and underline the need for the peaceful resolution of the conflict based on full respect for the Helsinki Final Act and international law, including the UN Charter.

We call upon the Russian Federation to fulfill immediately its clear obligation under the EU-mediated 12 August 2008 ceasefire agreement to withdraw its forces to pre-conflict positions, as well as its commitments to allow unfettered access for the delivery of humanitarian assistance and not to impede creation of international security arrangements on the ground. We also call in Russia to reverse its recognition of Georgia’s Abkhazia and South Ossetia regions as independent states. We condemn the recent approval of the “programme” on creation of common socio-economic space between the Russian Federation and the Abkhazia region of Georgia as another step toward de-facto annexation of Georgia’s Abkhazia and South Ossetian regions.

We are concerned by the ongoing provocations by the Russian Federation and the regimes in Sokhumi and Tskhinvali that have continued unabated amidst the COVID-19 pandemic. We are particularly concerned over the installation of barbed wire fences and other artificial barriers along the administrative boundary lines (ABLs) of Georgia’s Abkhazia and South Ossetia regions, and the lengthy closure of so-called crossing points in Georgia’s Abkhazia and South Ossetia regions along the ABLs. These actions have destabilized the situation on the ground and severely impacted the security, safety, well-being, and humanitarian conditions of civilians in conflict-affected areas, particularly in the Akhalgori and Gali districts. The deaths of those people who were deprived of the possibility of getting prompt and adequate medical care, due to the closures of the so-called crossing points since September 2019, is another tragic illustration of the grave consequences of the continuing restrictions on the freedom of movement for the local population. We are deeply concerned by ongoing arbitrary detentions along the South Ossetia ABL including the shooting and wounding of Georgian citizen Zaza Gakheladze on July 11, 2020. We call for humanitarian organizations to be provided prompt access to all detainees and we call for immediate release of Mr. Gakheladze and those under illegal custody.

We support the Geneva International Discussions (GID) as a critical format to address the security, human rights, and humanitarian challenges stemming from the unresolved Russia-Georgia conflict. We regret that to date no round has taken place this year and call for resumption of the meetings on dates established by the Co-Chairs. We underline the necessity of progress on the core issues of the discussions, including on the non-use of force, establishing international security arrangements in Georgia’s Abkhazia and South Ossetia regions and ensuring the safe, dignified, and voluntary return of Internally Displaced Persons (IDPs) and refugees in accordance with international law.

We express our support for the Incident Prevention and Response Mechanisms (IPRMs) in Ergneti and Gali and emphasize the important role they can have in preventing the escalation of the conflict and in helping protect the safety and security of people on the ground. We express our great concern over the lengthy suspension of the Gali IPRM. Acknowledging the resumption of the Ergneti IPRM in July 2020, as a positive step, we stress the necessity for resuming the meetings in Gali without further delay or pre-conditions, and underscore the importance of managing the functioning in full respect of the founding principles and ground rules.

We reaffirm our unwavering support to the EU Monitoring Mission (EUMM) and call upon the Russian Federation to allow the EUMM to implement its mandate in full, including by enabling the EUMM’s access on both sides of the administrative boundary lines.  We call on Russia to refrain from politicizing or spreading propaganda about the work of the EUMM, which has continued to fulfill a critical role throughout the pandemic.

We reiterate our deep concerns over the increased Russian military exercises and build up in Georgia’s Abkhazia and South Ossetia regions, including the Kavkaz 2020 exercises held partially on occupied Georgian territory in violation of its sovereignty and territorial integrity.

We remain deeply concerned over the ethnic discrimination against Georgians residing in Georgia’s Abkhazia and South Ossetia regions and about human rights abuses, including the reported use of torture, destruction of the houses of internally displaced persons, and severe violations of rights related to freedom of movement, residence and property. We support the voluntary return of internally displaced persons and refugees to the places of their origin in safety and dignity. We call on those in effective control to enable full and unhindered access by international human rights organisations to the Georgian regions of Abkhazia and South Ossetia.

We condemn the death of Georgian citizen Irakli Kvaratskhelia in detention at the Russian Military base in Georgia’s Abkhazia region, and the killing of Georgian citizens Archil Tatunashvili, Giga Otkhozoria, and Davit Basharuli, and urge the Russian Federation, as the state exercising effective control over Abkhazia and South Ossetia, to remove any obstacles to bringing the perpetrators to justice. In this context, we reiterate our support for Georgia’s preventive steps aimed at eradication of the sense of impunity for crimes committed in its territory under the Russian Federation’s control and note the adoption of the Otkhozoria-Tatunashvili List by the Government of Georgia.

The cyber-attacks on Georgia in October 2019 were another clear example of Russia’s long-running campaign of hostile and destabilising activity against Georgia.

We support the Georgian Government’s, ‘A Step to a Better Future’ peace initiative, aimed at improving the humanitarian and socio-economic conditions of people residing in Georgia’s Abkhazia and South Ossetia regions and at fostering confidence building among divided communities. We applaud the program’s initial successes, including the launch of its education programs and the “Enterprise for a Better Future” grants program, which already garnered interest and engagement of communities on all sides of the administrative boundary lines. We also welcome the establishment of the Peace Fund for a Better Future, and we look forward to supporting its continued implementation. We encourage Georgia to work further with the OSCE and other multilateral organisations to promote confidence-building measures on the ground.

We also encourage Georgia to keep the Permanent Council informed of its progress in in further strengthening its democratic institutions and processes.

We encourage the OSCE’s engagement in the process of finding a peaceful resolution to the conflict in Georgia. We regret the closure of the OSCE mission to Georgia in 2009 and encourage the OSCE participating States to decide on the reopening of the OSCE cross-dimensional mission in Georgia, including a monitoring capacity able to operate unhindered across the administrative boundary lines. The re-opening of the mission would strengthen considerably the OSCE’s engagement in the GID and IPRMs, and in implementation of confidence-building measures.