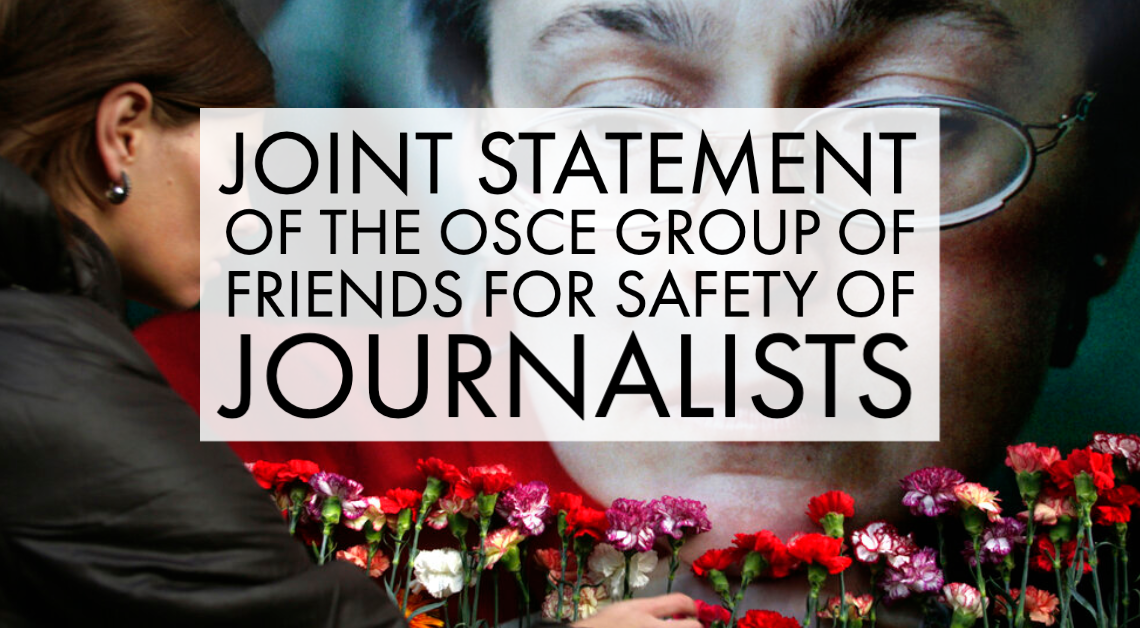 Violence and the threat of violence against journalists and other media actors are on the rise. (AP Photo)

As delivered by H.E. Christine Fages, Ambassador and Permanent Representative of France to the OSCE
to the Permanent Council, Vienna
November 4, 2021

I would like to make this statement on behalf of the OSCE Group of Friends of for the Safety of Journalists (countries).

On 2 November, the International Day to End Impunity for Crimes against Journalists, we commended the work of all journalists and other media actors, online as well as offline, who risk their lives and health in the service of the general public every day. They are essential in upholding a free, independent, plural, and diverse media, as well as the right to freedom of expression and opinion.

We regret that in the OSCE region, restrictions on the freedom of the media have become more pervasive and threats to the safety of journalists more prevalent during the past years. Violence and the threat of violence against journalists and other media actors are on the rise. These unacceptable and alarming actions have included killings, torture, enforced disappearances, kidnapping, arbitrary arrest and arbitrary detention, expulsion, intimidation, threats, and harassment, both in online and offline environments. We unequivocally condemn all attacks, reprisals and violence against all journalists and other media actors and pay tribute to all those who suffered attacks in the exercise of their duties.

We are deeply saddened that during the past year, we have again witnessed several murders of journalists in OSCE participating States. Reaffirming what the OSCE Representative on Freedom of the Media, Ms. Teresa Ribeiro, stated in May of this year: “these murders are a terrible blow to all media, to society, and all of us, as they show that we still live in a region where journalists literally risk their lives when doing their work”.

The vast majority of crimes against journalists in the world continue to go unpunished: according to     UNESCO, this figure is nearly 90 percent. Ensuring accountability by strengthening the response by law enforcement agencies and the criminal justice systems is crucial, including through access to effective remedies for victims and their families. It is of particular importance to strengthen legal frameworks and to create a safe working environment for those exposing corruption, organized crime, or abuses and violations of human rights.

We are deeply alarmed by the significant surge in attacks and repressions against journalists and other media actors covering protests. While the situation is worrying in many participating States, it is particularly serious in Belarus, where the crackdown against independent media has been systematic and far-reaching. One of the most high profile actions was the Belarusian authorities’ May 23rd forced diversion of a Ryanair flight with the apparent purpose of arresting an independent journalist who was critical of the regime. Journalists behind bars have endured beatings and reported torture, denial of timely legal or consular aid, forced testimonials of guilt, and other forms of intimidation and harassment. All recent cases of violence by law enforcement against independent media actors in the country have to be fully investigated. We therefore join RFOM Teresa Ribeiro in stating that “it is urgently needed that the Belarusian authorities put an end to the current climate of impunity regarding violence against journalists.”

It is very concerning that women journalists and media actors are disproportionately targeted for      violence and threats globally. In the online space, women journalists and media actors are far more exposed to attacks than their male counterparts. Many female journalists face multiple and intersecting forms of discrimination and gender-based violence, including due to race, religion, ethnicity, sexual orientation, or gender identity. Sexual and gender-based violence and abuse, online and offline, can result in deepening existing gender-related inequalities. This risks affecting women’s willingness to use their voices in the public space, thereby having a direct negative impact on democracy.

Now more than ever, we need to work decisively to end impunity for crimes against journalists. We would like to highlight the specific role and responsibility of the OSCE in this regard. The Office of the Representative on Freedom of the Media has a strong mandate to report whenever the safety of journalists or media freedom are threatened in any participating State; a mandate we highly value and fully support.

We will not turn a blind eye to violence, reprisals and threats against journalists and media actors anywhere in the OSCE region. We hope all participating States will echo our demand to end impunity and act decisively to bring the perpetrators of crimes against journalists to justice.