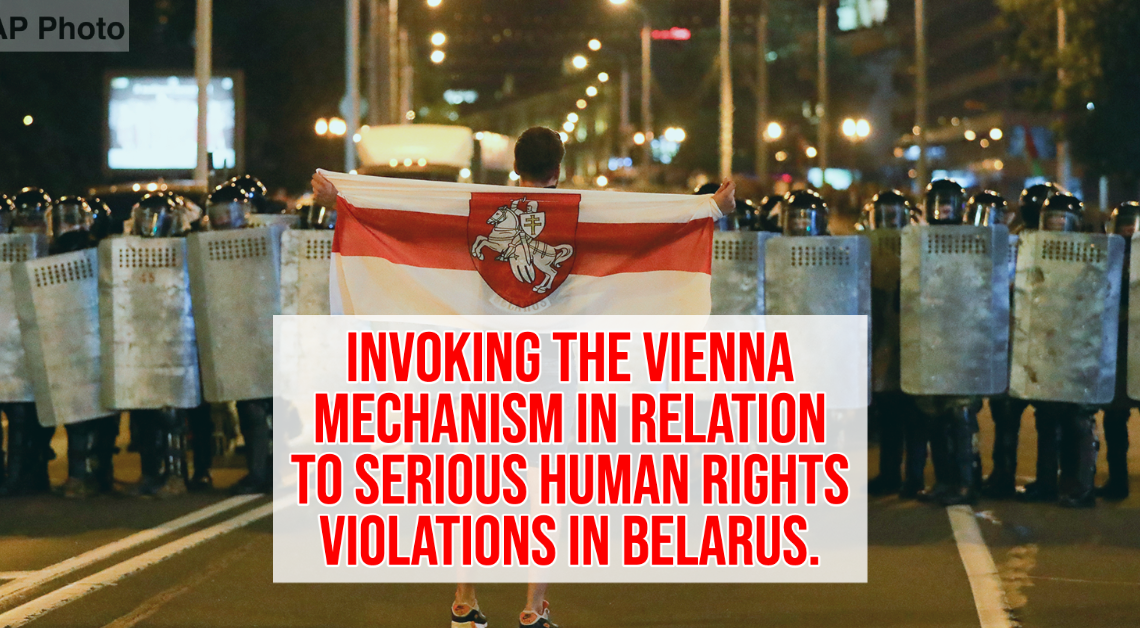 Joint Statement on behalf of 35 OSCE states to invoke the Vienna Mechanism in relation to serious human rights violations in Belarus.

Joint Statement on behalf of 35 OSCE states to invoke the Vienna Mechanism in relation to serious human rights violations in Belarus.

As delivered by Ambassador Neil Bush, Head of the United Kingdom’s OSCE delegation
to the Permanent Council, Vienna
November 4, 2021

During the Seventh OSCE Summit of Heads of State held in Astana in December 2010, all OSCE participating States emphasised that we are accountable to our citizens and each other for the full implementation of our OSCE commitments, and that we consider our commitments to be matters of immediate and legitimate concern amongst all participating States.

In that spirit, we stress that our countries continue to be deeply concerned about serious human rights violations and abuses taking place in Belarus. On 17 September 2020, 17 participating States invoked the OSCE’s “Moscow Mechanism” to establish a mission of experts to look into and report on credible accounts of human rights violations and abuses occurring before, during and after the Presidential election of 9 August 2020. Those concerns were identified as particularly serious threats to the fulfilment of the provision of the OSCE human dimension in Belarus. In addition to establishing the facts and reporting them, the mission was also encouraged to provide recommendations and advice.

The subsequent independent report, authored by the Rapporteur, Professor Wolfgang Benedek, was formally presented to the Permanent Council on 5 November 2020. The report’s conclusions were clear. The 9 August 2020 presidential election results were neither free nor fair, and “massive and systematic” violations and abuses of human rights and fundamental freedoms had been committed by the security forces. In addition, the report also made a number of recommendations to the Belarusian authorities, to all participating States and to the wider international community.

Instead of seeing a move towards a resolution of the crisis in Belarus, the situation has worsened and the Belarusian authorities’ response has continued to be inadequate.

Therefore, in response to the Belarusian authorities’ failure to respond satisfactorily to the 5 November 2020 Moscow Mechanism report, and considering our additional concerns over ongoing developments in the last 12 months, our countries are today invoking the Vienna (Human Dimension) Mechanism and Belarus’ commitments under that Mechanism.

Our concerns include, but are not limited, to the following:

(i) freedom of peaceful assembly: the Belarusian authorities have unduly restricted the right to freedom of assembly, by prohibiting peaceful protests, and arresting and using excessive force against peaceful protestors. The recent amendments to the Law on Mass Events is only one example of actions that are of concern.

(ii) media freedom: before and after the 2020 Presidential election, large numbers of independent media, journalists and media actors have been subject to repression, with the ordered closure of the Belarusian Association of Journalists only one example of independent voices being silenced by the authorities’ actions.

(iii) continued arbitrary or unjust arrests or detention: credible reports allege there are currently over 800 political prisoners in Belarus. Many individuals have been detained for participating peacefully in the political opposition around last year’s Presidential elections and the subsequent peaceful demonstrations, and for reporting and documenting human rights violations and abuses by the Belarusian authorities. The forced diversion and landing of Ryanair Flight FR4978 on 23 May 2021 for the apparent purpose of arresting journalist Roman Protasevich and his partner Sofia Sapega, is the highest profile example of politically motivated arrests over the last 12 months.

(v) torture: credible reports allege that more than 1,500 cases of torture and other cruel, inhuman or degrading treatment or punishment have occurred since the Presidential election. The International Accountability Platform for Belarus (IAPB) has so far documented more than 300 reported cases. The decision by the Investigative Committee of Belarus, announced on 26 August 2021, not to open criminal investigations into 680 complaints is indicative of a culture of impunity.

(vi) migration: the sharp increase in irregular migration across the Belarusian border, caused by the Belarusian authorities’ political instrumentalisation of migrants and refugees, puts vulnerable people at risk, adversely impacts their human rights, and has a destabilising effect on regional security.

For these reasons, and in accordance with Belarus’ OSCE commitments under the Vienna (Human Dimension) Mechanism, we request concrete and substantial responses to the following:

We expect to receive information in response to these serious concerns in writing within 10 days, in accordance with the Vienna (Human Dimension) Mechanism.