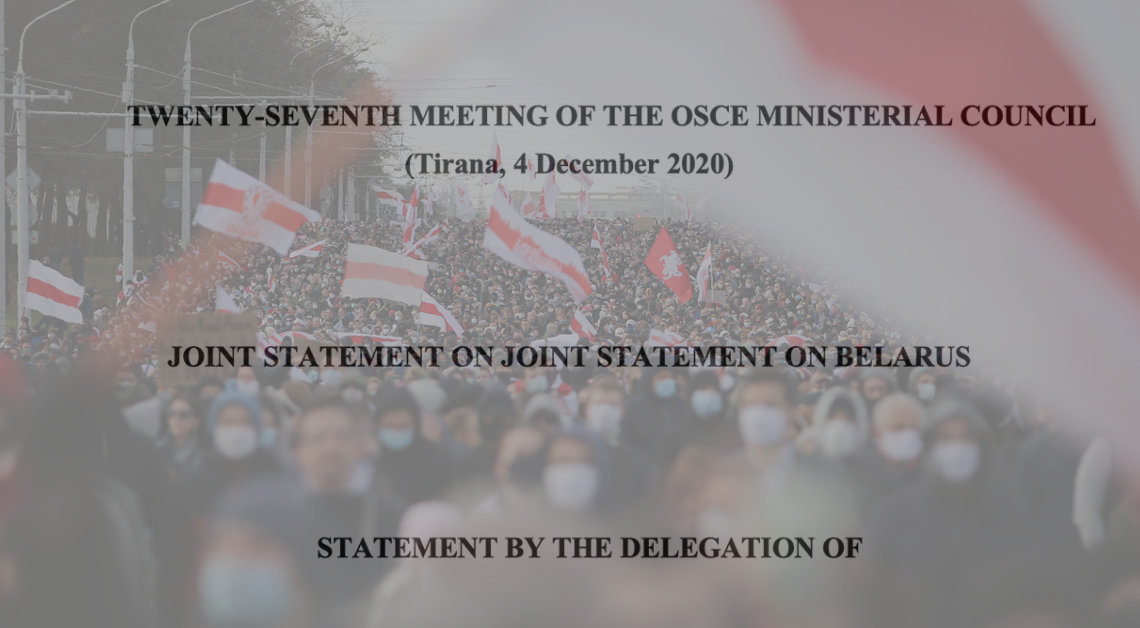 For the past several months, we have witnessed serious and ongoing violations and  abuses of human rights and fundamental freedoms in Belarus since the fraudulent  Presidential election of 9 August 2020. Moscow Mechanism Rapporteur Professor

Wolfgang Benedek’s report provided us with a large number of evidence-based accounts  of peaceful protesters who were violently attacked and tortured by the authorities,  simply for insisting on free and fair elections and a better, democratic future for their  country.

According to credible reports, the number of arrests of peaceful protesters, journalists  and human rights defenders is estimated at 30,000 since the Presidential election. The  number of politically motivated criminal cases is reaching 900. The list of political  prisoners continues to grow and contains more than 100 names. There is no indication  that the authorities are investigating the thousands of well-documented reports of police  brutality and torture filed since mid-August or the killings of protesters. We condemn  the use of force against Belarusians exercising their human rights and fundamental  freedoms.

As the report by the OSCE Rapporteur states, it appears that no professional or social  group in Belarus has been spared by the Belarusian authorities’ efforts to suppress  peaceful dissent. Pressure on the medical, academic, and media communities has been  especially harsh. Critics of the government and opposition figures have faced forced  expulsion.

peace, prosperity and cooperation among States. Upholding respect for human rights in  the OSCE area is the responsibility of all participating States. As reaffirmed at the 2010  Astana Summit, commitments undertaken in the field of the human dimension are  matters of direct and legitimate concern to all participating States and do not belong  exclusively to the internal affairs of the State concerned.

For the sake of the people of Belarus, we highlight as particularly noteworthy the  following recommendations from the Moscow Mechanism report. The report  recommends that Belarusian authorities should:

– Cancel the results of the presidential elections of 9 August 2020 due to  irregularities at all stages of the process
– Organize new genuine presidential elections based on international standards,  inviting OSCE/ODIHR observation as well as other international and domestic  observers
– Bring the electoral law into conformity with international standards as  recommended by OSCE/ODIHR and the United Nations
– Immediately cease all violence, in particular torture and ill-treatment against  peaceful protestors and opponents
– Immediately and unconditionally release all prisoners held for political reasons  ∙ Ensure that the standards of fair trial are respected
– Ensure the freedom of peaceful assembly in line with international standards ∙ Ensure the safety of all journalists and provide an enabling environment for the  work of journalists and the media
– Refrain from interference with the access to the Internet, and terminate  censorship and blocking of webpages
– Ensure that an independent and impartial body promptly investigates all  allegations of torture, ill-treatment, sexual violence, disappearance and killing by  security forces.

We urge Belarus to engage in dialogue within the OSCE and lend our full support to the  current and incoming OSCE Chairs and their efforts to facilitate a national dialogue in  Belarus. We stand ready to support and facilitate an inclusive national dialogue in order  to resolve the present crisis in a sustainable way, safeguarding Belarus’s sovereignty and  independence, as well as its safe, democratic and prosperous future.

Mr. Chairperson, I would be grateful if you could attach this statement to the journal of  today’s meeting.