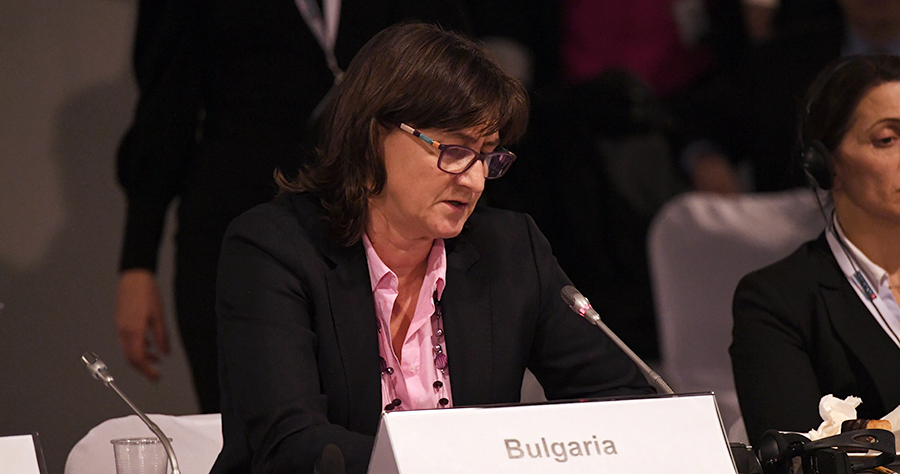 Ambassador Emilia Kraleva, the Permanent Representative of the Republic of Bulgaria to the OSCE, delivers the joint statement on Euro-Atlantic security at the closing Plenary of the 2019 OSCE Ministerial Council on December 6, 2019. (USOSCE/Gower)

As delivered by Ambassador Emilia Kraleva, Permanent Representative of the Republic of Bulgaria to the OSCE
at the 26th OSCE Ministerial Council Closing Plenary Session
Bratislava, Slovakia
December 6, 2019

The Euro-Atlantic security environment has become less stable and predictable as a result of Russia’s illegal and illegitimate attempted annexation of Crimea, which we do not and will not recognize, as well as by Russia’s ongoing acts of aggression in eastern Ukraine and its unjustified use of military force near the Kerch Strait and the Sea of Azov, in the Black Sea, in late 2018. We reiterate our full support to Ukraine’s sovereignty and territorial integrity within its internationally recognised borders and territorial waters. We reiterate our call on Russia to cease all financial and military support to the illegal armed formations operating on Ukrainian territory, withdraw all Russian military equipment and personnel as well as to comply with its international commitments by ensuring unhindered access to Ukrainian ports in the Sea of Azov and allowing freedom of navigation in accordance with international law. We call on Russia to immediately release all remaining Ukrainian citizens who continue to be illegally detained. We welcome the completion of disengagement in Stanytsia Luhanska, Zolote, and Petrivske and we encourage further steps in the right direction. We hope to see substantial progress towards resolution of the conflict in the Trilateral Contact Group and Normandy format discussions particularly at the occasion of the upcoming Normandy Four Summit on December 9th, in Paris. In this regard, we commend Ukraine’s leadership for its commitment to peaceful resolution of this conflict and call on Russia to act likewise.

Arms control, disarmament, and non-proliferation have made and should continue to make an essential contribution to achieving our security objectives and to ensuring strategic stability and our collective security. We are determined to preserve, strengthen, and modernize conventional arms control in Europe, based on key principles and commitments, including respect for sovereignty and territorial integrity, refraining from the threat or use of force, reciprocity, transparency, and host nation consent.

Russia’s ongoing selective implementation of the Vienna Document and the Treaty on Open Skies, and its long-standing non-implementation of the Treaty on Conventional Forces in Europe, combined with its aggressive military posture, have undermined our security. We call on Russia to return to full implementation of and compliance with the letter and spirit of all of its international obligations and commitments, which is essential to rebuild military transparency and increase predictability in the Euro-Atlantic region.

Enhancing military transparency and confidence in entire OSCE region is, and will remain, a top priority. OSCE participating States should continue to address effective risk reduction and incident prevention and increase military transparency. We also underline that the OSCE remains an important and inclusive platform for rebuilding trust and confidence through multilateral military dialogue amongst 57 participating States. We consider that full implementation and modernization of the Vienna Document is the most critical step that OSCE participating States can take in that regard.

As a legally binding instrument, the Treaty on Open Skies has contributed to increasing confidence and advanced cooperative security. We regret Russia’s continued non-compliance with the Treaty and condemn Russia’s denial of a flight segment under an agreed mission plan to overfly exercise Tsentr 2019, which was in clear violation of the Treaty on Open Skies. We call on Russia to be open and transparent and act in a manner consistent with their Treaty obligations. We welcome the decision on the distribution of active quotas that enables flights to continue in 2020.

At the same time, we value the Structured Dialogue on the current and future challenges and risks to security in the OSCE area as an opportunity to renew a meaningful exchange of ideas among all of the stakeholders to rebuild trust. We commend the Chair of the Informal Working Group, Ambassador Boender, and his team for the significant and valuable work done this year in the Structured Dialogue addressing risk reduction and threat perceptions. We actively support the continuation of the Structured Dialogue as a transparent, inclusive process owned and driven by participating States, and without a predetermined outcome. We acknowledge that this is a long-term process, which will take more time. We encourage all participating States to engage constructively in these efforts in Vienna.

Mr. Chairperson,
The participating States subscribing to this statement request its inclusion in the Journal of this ministerial meeting.