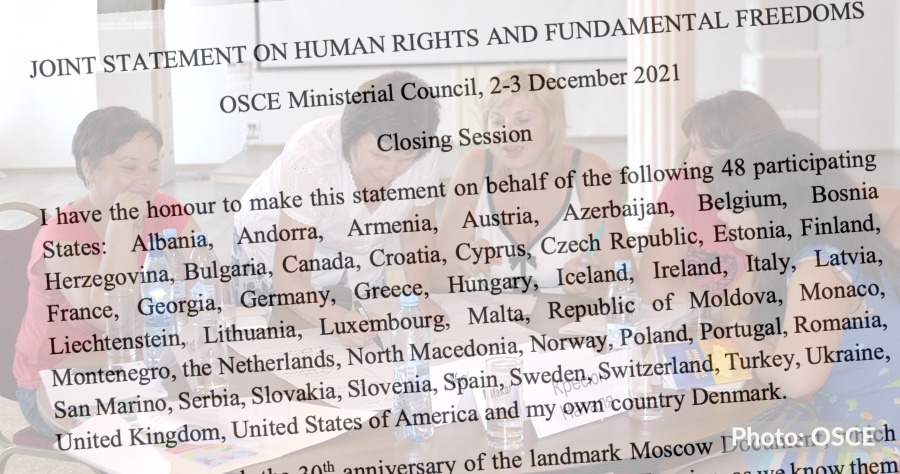 at the OSCE Ministerial Council in Stockholm, Sweden
December 3, 2021

This year, we mark the 30th anniversary of the landmark Moscow Document, which contributed to shaping the democratic principles of the OSCE region, as we know them today. In this milestone document, the participating States jointly emphasised that the respect for human rights, fundamental freedoms, democracy and the rule of law is one of the foundations of the international order.

Since then, we have made great strides in advancing human rights and fundamental freedoms. However, still today, we see that the fight for freedom, justice and democracy is far from over, and that their defence requires our ongoing vigilance and principled action. The space for civil society and independent media is rapidly shrinking. Discrimination excludes too many from full, equal and meaningful participation in our societies. And the news headlines feature threats and violence against peaceful protesters.

At the same time, the world has never been more interconnected. People exercise their human rights and fundamental freedoms online as well as offline. Human rights violations and abuses in one part of our region can have a serious impact in another. As the OSCE’s comprehensive security concept provides, respect for human rights within states remains essential to lasting security and prosperity among states.

We highly value the Human Dimension Implementation Meeting as an important platform for the participating States and civil society to review the implementation of the OSCE human dimension commitments across the region. We deeply regret that this year’s meeting was not held, and it is important that the HDIM is held next year.

Accordingly, we will continue to speak out when democratic principles, human rights and fundamental freedoms are violated or abused. Whether it is human rights defenders and journalists facing reprisals for their brave work, or violent crackdowns on peaceful protesters aspiring for democratic change. We will keep pressing for the eradication of torture and other ill-treatment. We will continue to defend free and fair elections. We will challenge stereotypes and prejudice, combat myths with facts, and promote a world where no individual is left behind or targeted for who they are, for whom they love, for what they look like, or for what they believe or say.

Civil society is the conscience of our countries. It provides a source of ideas and is a key component of an open, inclusive and thriving democracy, where no one is above the law. We are therefore committed to a world where all are free to associate and peacefully assemble, speak their mind, believe or not believe and hold their governments to account without retribution. We pay tribute to the individuals and civil society organisations that work tirelessly to defend our shared dedication to democracy, human rights and fundamental freedoms. They deserve our recognition, protection and support.

We commend the work of the OSCE autonomous institutions – ODIHR, the RFOM and the HCNM – for their efforts to promote and protect human rights, as core components of peaceful, inclusive and democratic societies. Their work, mandates and institutional independence are essential to the promotion and advancement of democracy, human rights and fundamental freedoms in our region. We highly appreciate the important work of the OSCE field operations. They assist the implementation of our commitments on the ground every day.

Thirty years on, the commitments and tools in the Moscow Document remains as important as ever. We will continue to fight to ensure that the implementation of OSCE principles and commitments stays at the forefront of our work in this organisation for the benefit of all who call the OSCE region their home.

I would be grateful if you would attach this statement to the journal of today’s meeting. Thank you.