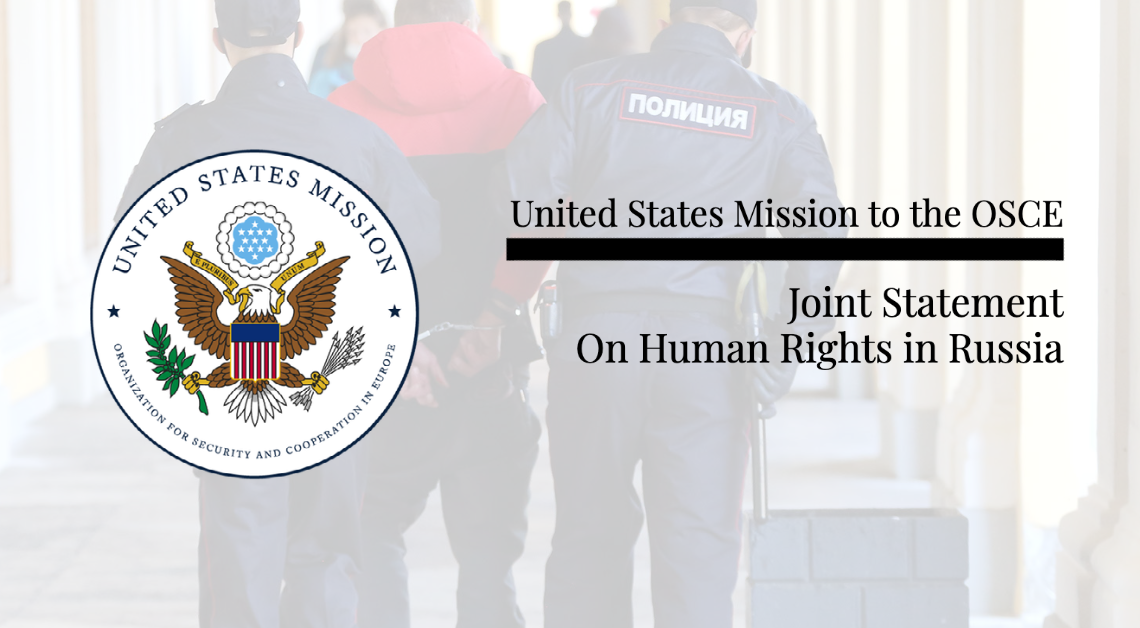 Human Rights Day is an occasion to celebrate the inalienable rights that everyone is entitled to as a human being. But Human Rights Day also reminds us to address the deficits.

Repressive legislation and administrative practices are being used to restrict the exercise of human rights and fundamental freedoms of people in Russia, most notably through the so-called “foreign agents” and “undesirable organisations” laws. The report found that “Russian legislation in this area is clearly incompatible with the rule of law.” Particularly, the foreign agents law, the report went on, “can be understood as one of the major tools for curbing civil society activities both of associations and individuals and for bringing them under control of the authorities.”

We need to bring this legislation to the attention of this council again because the Russian Federation has further toughened the foreign agents law through a legislative amendment of 14 July. Despite the clear guidance provided in the report, this legislative amendment entered into force on 1 December. Under this new legislation, it even constitutes criminal behaviour to “receive support and/or otherwise be under foreign influence”. The report explains the “very broad margin for interpretation” that this legislation provides, and the chilling effect it will have on participation in State affairs and public life.

The law thereby expands the definition of a so-called “foreign agent” to a point where almost any person or entity, regardless of nationality or location, could be designated as such. This makes it even easier for Russian Federation authorities to threaten critics, impose harsh restrictions on legitimate public activities and even ban them. It makes thoughtful public discourse about Russia’s past, present and future harder – yet not impossible, as also evidenced by the recent OSCE Parallel Civil Society Conference 2022 in Łódź.

The public discourse the Russian authorities are most desperately trying to suppress is the one on Russia’s unprovoked, unjustified and illegal war against Ukraine. In that regard, the Moscow Mechanism report identified the use of legislation on state secrets and treason as a “growing concern”. In October, the opposition activist and long-time champion of OSCE principles Vladimir Kara-Murza was charged with high treason. Investigators claim that Mr Kara-Murza committed high treason when he spoke against the war in Ukraine at public events in Lisbon, Oslo and Washington. Apparently, the crude logic goes, Mr Kara-Murza is deemed to have cooperated with NATO simply for expressing an anti-war stance in NATO countries. We reiterate our call to the Russian authorities to release Mr Kara-Murza and all political prisoners, and to stop their relentless attacks on dissidents and ordinary citizens who dare to express their opinions.

The rapporteur further notes that recently adopted legislation prohibiting the sharing of so-called fake news about the Russian military, statements “discrediting” the Russian Armed Forces, and calls for sanctions against Russia are politically motivated and instrumentalized by the Russian authorities to silence dissenting voices, leading to a “total information blackout on the war.”  On 8 July, municipal deputy Aleksei Gorinov was sentenced to seven years for disseminating so-called “knowingly false information” for speaking out against Russia’s invasion of Ukraine. On December 9, Russian opposition politician Ilya Yashin was sentenced to 8.5 years in prison for allegedly “spreading false information” about the Russian military by speaking the truth about atrocities committed by Russia’s forces in Bucha.

In the Moscow Mechanism report, the rapporteur noted with great concern the developments in Russia  regarding the human rights of LGBTI individuals, particularly a new draft law of 18 July prohibiting the dissemination of information denying family values and propagating so-called non-traditional relationships, inter alia on the internet and in the cinema. Only last week, President Putin enacted the law with his signature after the State Duma had adopted the law on 24 November and the Federation Council had approved it. The law reinforces stigma and prejudice against LGBTI persons despite our OSCE commitments to combat intolerance and discrimination and to promote mutual respect and understanding.

The Russian Federation has failed to reverse its policy contrary to OSCE commitments in the field of human rights and fundamental freedoms.

Russia cannot dispense with its international obligations by violating them. Our OSCE commitments stand and they will withstand the challenge by Russia’s government. We will continue to remind the Russian Federation of its OSCE commitments.