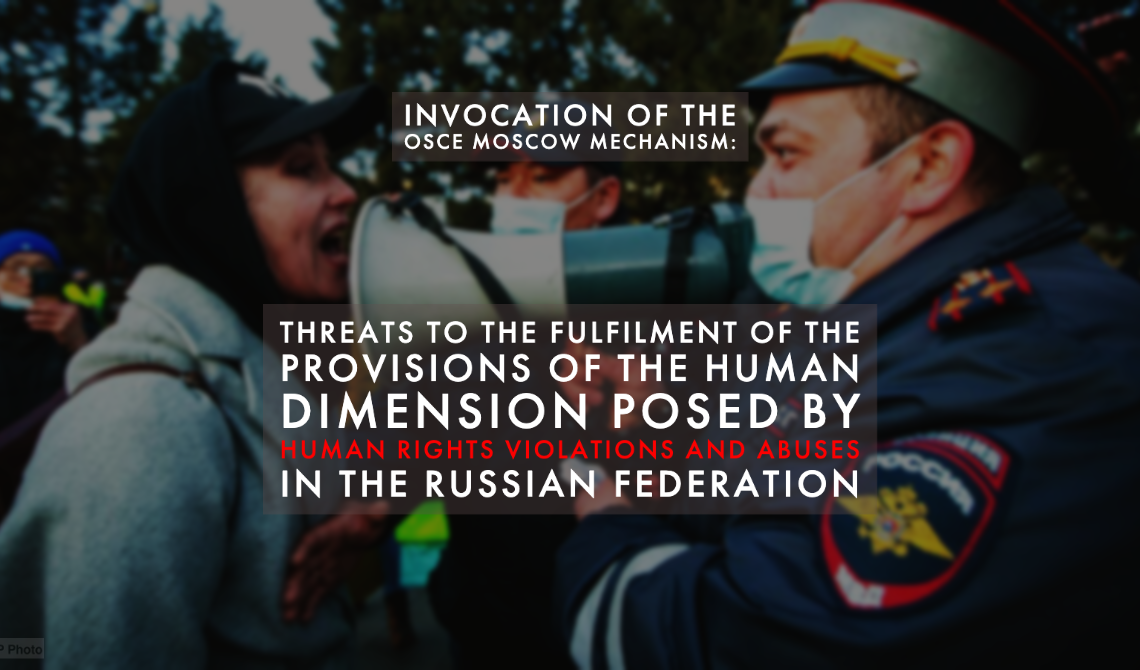 According to the OSCE Representative on Freedom of the Media “the Russian Federation is rapidly moving towards a situation of complete censorship and isolation of its citizens from any form of independent information”.

Joint Statement on invoking the Moscow Mechanism: Human Rights Violations and Abuses in the Russian Federation

As delivered by Kristín A. Árnadóttir, Permanent Representative of Iceland to the OSCE
to the Permanent Council, Vienna
July 28, 2022

We have all been following very closely and with increasingly deep concern the human rights situation in the Russian Federation. As a participating State in the OSCE, the Russian Federation has freely committed to upholding human rights and fundamental freedoms. It has also recognised their universal significance and acknowledged that respect for human rights and fundamental freedoms is an essential factor for the peace, justice and well-being necessary to ensure the development of friendly relations and co-operation among States.

However, numerous laws imposed in the Russian Federation over the last years, such as the “foreign agents” law, regulation of the so-called “undesirable” organisations, as well as countless decrees by the Federal Service for Supervision of Communications, Information Technology and Mass Media (Roskomnadzor), along with individual administrative decisions, have all been used by Russian authorities to crack down on independent civil society, independent media, and political opposition, targeting in particular non-governmental organisations, anti-corruption activists, human rights defenders, journalists, other media actors, researchers, and lawyers. Allegations of extremism have also been used to outlaw dissenting opinions or beliefs, as well as to ban peaceful organisations.

According to a statement made by the OSCE Representative on Freedom of the Media on 16 March 2022, “the Russian Federation is rapidly moving towards a situation of complete censorship and isolation of its citizens from any form of independent information”. As reported by the citizen monitors, the Russian Federation continues to hold more than 430 political prisoners. There are also widespread reports of torture and other mistreatment in places of detention throughout Russia. The censorship of the media and of content on the internet, political repression, impunity for violence, the spread of hate speech, engagement in propaganda for wars of aggression, the imposition of severe restrictions on freedom of assembly and association, on the right to liberty and security of person, and on the right to vote and to be elected all indicate a clampdown on democracy, the exercise of human rights and the rule of law in Russia. All this requires further assessment of the impact of these severe measures on the human dimension of security. Any failure to respect and protect human rights and fundamental freedoms runs counter to OSCE commitments.

Our delegations, as well as many others at the Permanent Council, have repeatedly raised growing concerns about these developments. The Russian Federation’s response has been inadequate. We note that Russia has also failed to provide an adequate response to the findings and recommendations of the 2018 Moscow Mechanism Experts Mission report on allegations of impunity for reported human rights violations and abuses in the Republic of Chechnya, and that alarming information continues to emerge from Chechnya about abuses and violations of human rights.

Today we take the step of invoking paragraph 12 of the 1991 Moscow Document of the Conference on the Human Dimension of the OSCE (Moscow Mechanism) to establish a mission of experts to look into and report on the ongoing concerns we have identified as particularly serious threats to the fulfilment of the provisions of the OSCE human dimension by the Russian Federation, to assess Russia’s legal and administrative practice in light of its OSCE commitments, to establish the facts, and to provide recommendations and advice.

The mission of experts will be tasked, inter alia, to report on the following:

We encourage the mission of experts to apply a gender-sensitive approach to their assessment. In addition to establishing the facts, we also encourage the experts to offer recommendations and give advice to the Russian Federation, to the OSCE, and to the international community on how to address the matters of concern. In particular, we encourage the experts to offer recommendations to the OSCE and its participating States on identifying early warnings and addressing such emerging challenges in a timely and effective manner.

We look forward to working with ODIHR on arrangements for the mission.