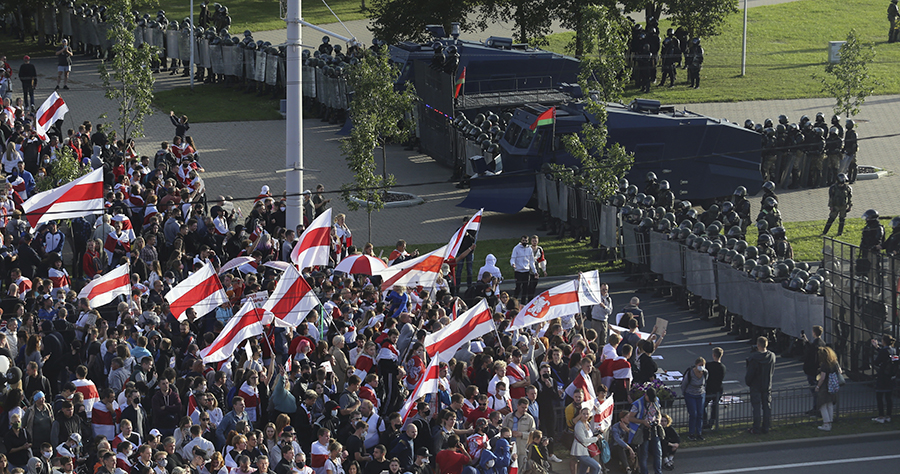 Protesters with old Belarusian national flags gather in front of a riot police line during a Belarusian opposition supporters' rally in Minsk. (photo: TUT.by via AP)

As delivered by U.K. Ambassador Neil Bush
to the Permanent Council, Vienna
September 17, 2020

I am delivering this statement on behalf of the following delegations: Belgium, Canada, the Czech Republic, Denmark, Estonia, Finland, France, Iceland, Latvia, Lithuania, Norway, the Netherlands, Poland, Romania, Slovakia, the UK, and the United States.

We have all been following the situation in Belarus very closely and with increasing concern.  Many of us expressed our concerns at the Special Permanent Council convened on 28 August, and again at the Permanent Council on 3 September.

So far, the response of the Belarusian authorities has been to systematically target those who would engage in dialogue, and to continue its violent repression of peaceful protestors, including women and young people.

The Presidential elections on 9 August were neither free nor fair: there were restrictions on the exercise of human rights and fundamental freedoms in the run-up to the elections including intimidation and persecution of political activists, candidates, journalists, media activists, lawyers, labour activists, and human rights defenders; and on election day there were credible reports of serious irregularities at polling stations. Nor were the elections appropriately transparent. Restrictive measures prohibited local independent observers, and the lack of a timely unconditional invitation from the Belarusian authorities meant ODIHR were prevented from undertaking a credible and effective mission and were therefore unable to observe the election process.

Before the election, Belarusian authorities arrested opposition politicians  and prevented them from registering their candidacies  for office.  Since the election, we have seen the continued detention of key opposition figures, and the intimidation, detention and expulsion from Belarus of political activists.  We have also seen repeated deliberate internet shutdowns preventing the dissemination of information.

We strongly condemn the post-election mass detentions and arrests brutally  carried out with impunity by Belarusian authorities against peaceful protestors and the intimidation and detention of local journalists and other media actors, lawyers, human rights defenders and labour and political activists.

We are not alone in expressing these concerns and in criticising the actions of the Belarusian authorities. A majority of participating States have spoken clearly in support of the need for Belarus to abide by its commitments and to engage in Dialogue. UN human rights experts have called on Belarus to stop torturing detainees, to bring to justice those responsible and to put in place safeguards against enforced disappearances.

We continue to support efforts by the OSCE Chair to facilitate an open and constructive national dialogue in Belarus.  To date, there is no indication that the Belarus authorities are  willing to engage in such a dialogue.

Today we take the step of  invoking paragraph 12 of the 1991 Moscow Document of the Conference on the Human Dimension of the OSCE (Moscow Mechanism) to establish a mission of experts to look into and report on the ongoing concerns we have identified as particularly serious threats to the fulfillment of the provision of the OSCE human dimension in Belarus, and provide recommendations and advice.  As noted,  those concerns centre around credible reports of human rights violations and abuses, including intimidation and persecution of political activists, candidates,  journalists, media actors, lawyers, labour activists and human rights defenders, as well as the detention of prospective candidates; election fraud; restrictions on access to information, including Internet shutdowns; excessive use of force against peaceful protesters; arbitrary or unlawful arrests or detentions; beatings; sexual and gender based violence; abductions and enforced disappearances; torture and other cruel, inhuman or degrading treatment or punishment, and widespread impunity for all of those actions.

In addition to establishing the facts and reporting on them, we encourage the mission of experts to offer recommendations and give advice to Belarus, to the OSCE, and to the international community on possible solutions to the concerns  raised.

We look forward to working with ODIHR and the Belarusian delegation in the coming days on arrangements for the mission. An expert mission, one member of which may, in accordance with paragraph 10 of the Moscow Document, be chosen by the Republic of Belarus, should give an objective and unbiased report,  recommendations and advice on these issues.