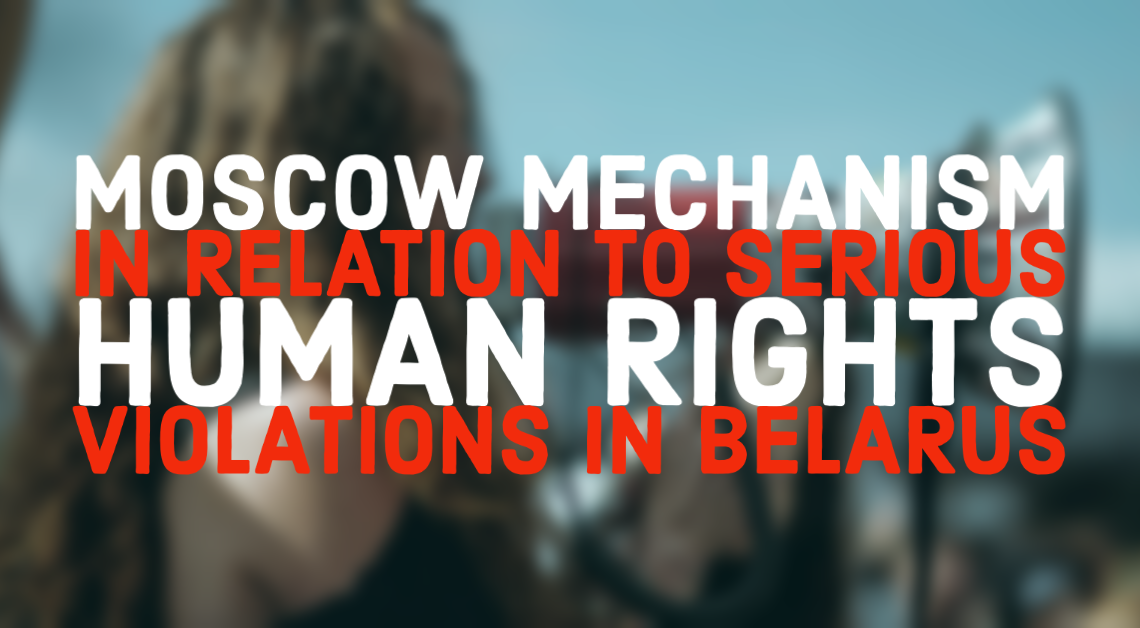 I am delivering this statement on behalf of the following delegations who, acting together, on 17 September invoked the Moscow Mechanism in relation to concerns centring around reports of serious human rights violations and abuses in Belarus: Belgium, Canada, the Czech Republic, Denmark, Estonia, France, Finland, Iceland, Latvia, Lithuania, Norway, the Netherlands, Poland, Romania, Slovakia, the United Kingdom, and the United States.

On behalf of the invoking States I wish to thank Professor Wolfgang Benedek for his work as Rapporteur under the OSCE’s Moscow Mechanism – we are most grateful for your professional and meticulous approach to your mandate and for the substantial report which you have produced. Your professional integrity and dedication to human rights and fundamental freedoms are apparent in your report. I hope that all 57 participating States to the OSCE will do justice to your report by considering carefully your findings, and recommendations, which are addressed not only to Belarus but also to OSCE participating States and the wider International Community.

We invoked the Moscow Mechanism because we identified the situation in Belarus as a particularly serious threat to the fulfillment of the provisions of the OSCE human dimension as set out in various documents. The mandate provided was substantial, reflecting the scope and severity of the alleged human rights violations and abuses.

It is clear from the report that we were right to be concerned. The report is based on extensive documentation, including reports, testimonials by victims and eyewitnesses, official information and reports by the authorities. It concludes the facts are overwhelming: that the 9 August 2020 Presidential election results were fraudulent and that sustained and systematic violations and abuses of human rights and fundamental freedoms have been committed by the Belarusian security forces of the Lukashenka regime. Peaceful protestors have been met with brutal force from the Belarusian police and other security forces. People have been arbitrarily detained on political charges, and imprisoned before and after the elections. The freedom of the media and the safety of journalists and media workers, from both local and international media, have been under sustained attack. The Belarusian security forces have operated with general impunity despite numerous credible reports of abuse.

This independent report reveals evidence of the Belarusian authorities acting with excessive violence, and confirms their involvement in torture and other ill-treatment as well as enforced disappearances.

Professor Benedek cites numerous instances of reported human rights violations, with first hand reports of detainees, some as young as 15, being subjected to

physical and psychological torture and other ill-treatment, including beatings, rape and threats of rape, and electric shocks, as well as reports of their being held in cramped detention conditions and denied food and drink for prolonged periods. The report notes that not a single investigation has been opened or a single official suspended in response to what the report terms “systemic torture and ill treatment” designed to “punish demonstrators”. The report also draws attention to the intimidation of women activists with the threat of removal of their children.

It is noticeable that the report draws on the testimony of numerous individuals including human rights defenders, journalists and members of civil society in Belarus. We are grateful to all who contributed information for this extensive report. In revealing what has been happening inside Belarus, they have demonstrated incredible bravery and fortitude, and are deserving of our praise and support.

Their testimonies are stark reminders of the backdrop to the current crisis – the Presidential election on 9 August which was neither free nor fair; and the attempts by the Belarusian people, across all walks of life, to peacefully protest against that fraudulent election and the repression that followed. Those peaceful actions have been met with brutality and restrictions on peaceful assembly, media freedom and freedom of expression.

In addition to providing an independent report on the facts, Professor Benedek has offered a series of recommendations addressed to the Belarusian authorities, to the international community and to OSCE participating States. We welcome those recommendations and look forward to discussions in the OSCE and elsewhere, in the weeks ahead.

We highlight as particularly noteworthy the following recommendations. The Belarusian authorities should:

The first step towards progress must be for the Belarusian authorities to cease their campaign of violence against peaceful protestors, release all those unjustly imprisoned and hold perpetrators to account. The impunity must end.

The OSCE’s Moscow Mechanism was established by consensus and in good faith by all participating States. It provides an opportunity for an independent examination of alleged serious human rights violations in a participating State. Reports under the Mechanism should provide the basis for discussion and action, in the spirit of the OSCE as a forum for meaningful dialogue. We therefore remain deeply disappointed by the refusal by the Belarusian authorities to engage with the Rapporteur and the Moscow Mechanism. We urge the Belarusian authorities to reconsider their approach, engage with the process at today’s Permanent Council and in the future, and also cooperate with other ongoing international mandates, such as the UN Special Rapporteur on the Situation of Human Rights and Belarus.

For those recommendations, and the full content of the report, I must, again, offer our sincere thanks to Professor Benedek.