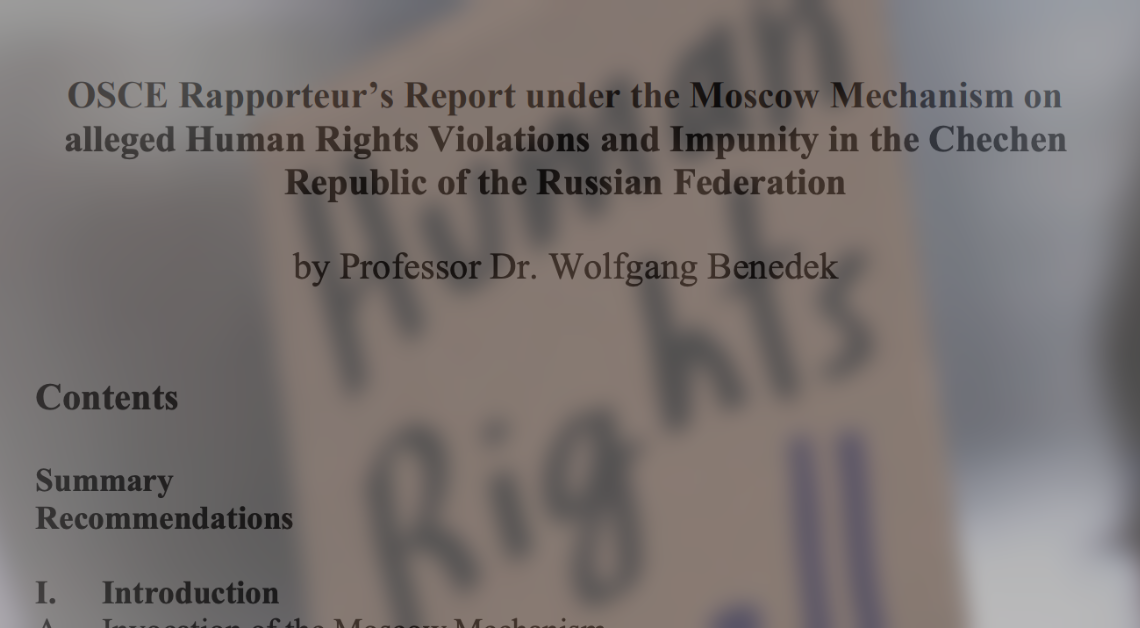 As delivered by Ambassador Jeroen Boender of the Netherlands
to the Permanent Council, Vienna

In November 2018, 16 participating States took the important step of invoking the OSCE Moscow Mechanism to look into multiple allegations of serious human rights violations and abuses in the Russian Federation’s Republic of Chechnya that allegedly were committed during January 2017 to November 2018 against LGBTI persons, human rights defenders, members of the independent media, lawyers and others.

In December 2018, the Report resulting from the Moscow Mechanism found that “harassment and persecution, arbitrary or unlawful arrests or detentions, torture, enforced disappearances and extrajudicial executions” had indeed occurred. The Report also found “a climate of impunity”

surrounding such violations and abuses. We called on the Russian Federation to make full use of the report and to implement all recommendations contained therein, in order to address the issues raised in a constructive manner and to stop the human rights violations and abuses in its Chechen Republic under the leadership of Ramzan Kadyrov.

Two years have passed since the report resulting from the Moscow Mechanism was issued. Still, there has been no constructive response to the report or its recommendations from Russian federal and local authorities. Meanwhile, new information has come to light about additional serious human rights violations and abuses in Chechnya.

Reports of abuses against LGBTI persons continue to emerge. A young woman, Aminat Lorsanova, has come forward and alleges that in 2018 her relatives had her institutionalized successively in two separate treatment centers where she was beaten repeatedly in an attempt to change her sexual orientation. Chechen authorities have created an atmosphere that normalizes and condones such despicable acts of violence against LGBTI persons, while federal authorities continue their deafening silence. In January of this year, Aminat Lorsanova filed a complaint with the Russian Investigative Committee, which still has taken no action.

We also are alarmed by reports of a sharp increase in enforced disappearances in Chechnya. Ramzan Kadyrov’s security forces continue

to routinely engage in appalling acts of violence to punish any form of dissent. The Chechen authorities appear to be targeting primarily young persons who have engaged with content on the Internet criticizing the Chechen authorities. According to the human rights group Memorial, at least twenty two individuals have been unlawfully detained in recent months. Some reportedly remain in incommunicado detention under the control of Chechen authorities.

We are particularly concerned by credible reports of the recent disappearance of nineteen-year-old Salman Tepsurkayev, a moderator for the Telegram social media channel 1ADAT. He was allegedly kidnapped by Chechen security officials on September 6 and taken to the Terek Special Rapid Response Police Compound in Grozny. Subsequently, Salman Tepsurkayev appeared in a video that showed him under conditions of extreme duress for allegedly helping to “spread lies” about Chechen authorities.

We also are deeply troubled by the case of Movsar Umarov, who was arrested at his workplace in Grozny on July 18, allegedly for watching a video blog produced by Tumso Abdurakhmanov, a popular critic of Chechen authorities. In late August, Movsar Umarov’s family was informed that he had “escaped” from detention and was no longer in custody. His family has not heard from him since. In October, local authorities opened a murder investigation at the request of Movsar Umarov’s mother, who fears he may have been extrajudicially killed.

Multiple times over the past two years, we have called on the Russian Federation to put an end to the human rights violations and abuses in its Chechen Republic, to protect the victims, and to respect the dignity and human rights of all individuals without discrimination. We have repeatedly called on the Russian Federation to conduct prompt, effective and thorough investigations into all reports of such violations and abuses, in order to ensure that anyone responsible or complicit is held accountable.

Despite these calls the climate of impunity described in the Moscow Mechanism Report continues to prevail in Chechnya.

We renew our call on the Russian Federation to pursue investigations and to act without further delay on the recommendations of the Moscow Mechanism rapporteur to:

We will continue to monitor the situation in Chechnya and to raise our concerns until we receive a substantive response from the Russian Federation and observe tangible progress in Chechnya.