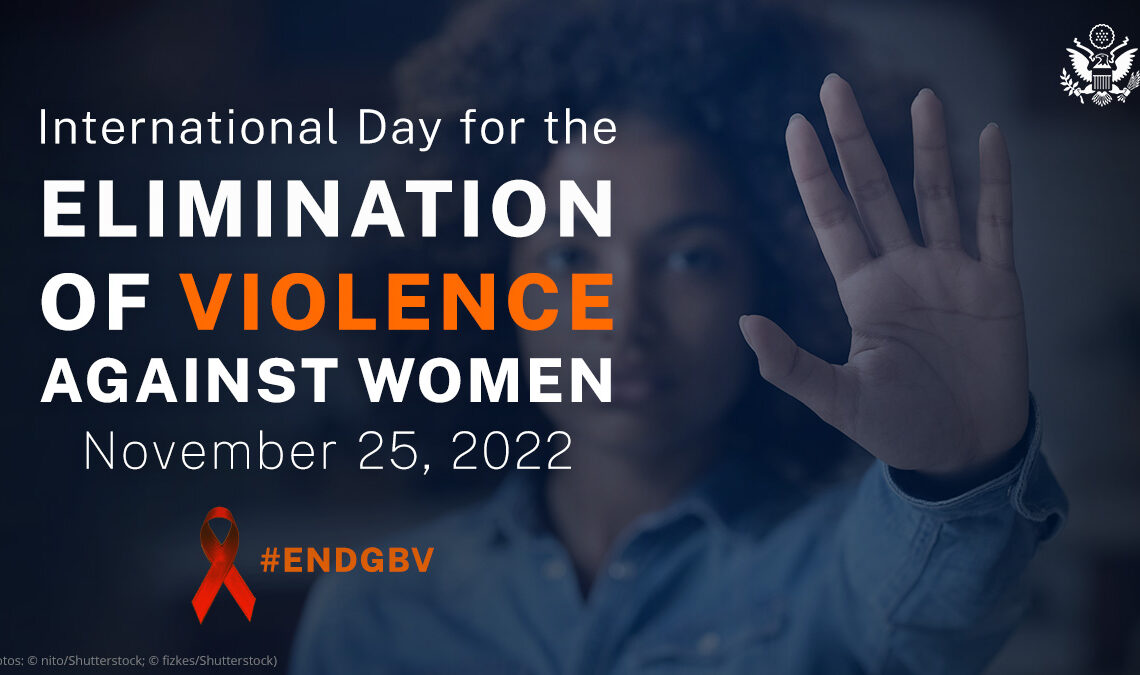 International Day for the Elimination of Violence Against Women.

As delivered by Ambassador Veselin Šuković, Permanent Representative of Montenegro to the OSCE
to the Permanent Council, Vienna
November 24, 2022

On behalf of this group of OSCE participating States, I would like to recognize the importance of the International Day for the Elimination of Violence Against Women on 25 November. It marks the start of the 16 Days of Activism Against Gender-Based Violence and concludes on 10 December, the International Human Rights Day.

The theme for the 16 Days of Activism in 2022 is ‘UNITE! Activism to End Violence against Women & Girls’. This theme reminds us of the importance of standing in solidarity with women human rights defenders. We need to support movements for gender equality around the world, that bravely resist any attempts to weaken women’s and girls’ enjoyment of human rights.

Gender-based violence pervasively and persistently undermines women’s and girls’ enjoyment of their human rights. The World Health Organization estimates that globally one in every three women and girls will experience violence during their lifetime. Both online and offline, from homes to conflict zones, this truly is a global crisis. There is no country in the world where women are free from violence.

The Russian Federation’s illegal and unjustified war against Ukraine has caused tragic and devastating loss of life and suffering for millions of civilians. We are gravely concerned about the credible evidence and testimonies of pervasive gender-based violence committed by Russia’s troops in Ukraine.

We strongly condemn such crimes and stress that conflict-related sexual violence is often a violation of international humanitarian law and may constitute war crimes or crimes against humanity.

We must unite in our support for victims, their dignity, and their human rights. We should hold perpetrators accountable for all crimes committed and end impunity.

The evidence is clear: high levels of gender equality are associated with more peacefulness, stability and prosperity, and gender-based violence against women and girls continues to be a serious obstacle to achieving gender equality.

As OSCE participating States, we have a comprehensive set of commitments, that must guide our efforts to end all forms of sexual and gender-based violence.

In the 1999 Charter for European Security, the Istanbul Document, we committed to make gender equality an integral part of our policies, both nationally and within the OSCE.

The 2004 Action Plan for the Promotion of Gender Equality set out a plan to ensure the monitoring and implementation of this commitment, as well as to promote and strengthen the Women, Peace, and Security agenda.

The Ljubljana (2005), Basel (2014) and Milan (2018) Ministerial Council Decisions are strong commitments that help us to address the alarming prevalence of gender-based violence, including sexual violence, against women and girls in our region.

The Milan Ministerial Decision (2018) also recognised the importance of engaging men and boys in addressing the root causes of gender inequality and violence, as well as raising awareness about the impact of negative attitudes, behaviours, and gender stereotypes. Women cannot achieve gender equality alone.

The OSCE’s commitment to gender mainstreaming and advancing the Women, Peace and Security agenda is key to achieve our goal of gender equality. We applaud the OSCE Secretariat and Executive Structures, the Field Missions, the Autonomous Institutions and the OSCE Parliamentary Assembly for their vital role in advancing and facilitating progress towards our goal of achieving gender equality, promoting the WPS agenda, and eliminating gender-based violence.

The OSCE Secretariat’s theme for the 16 days, “END IT NOW! United to fight violence against women and girls”, reminds us that it is urgent that the OSCE and its participating States, in partnership with civil society and especially women’s movements, act to ensure women’s and girls’ safety from violence, including in areas of conflict and crisis. Victims and survivors, their families and communities, should have access to comprehensive, gender-transformative, trauma informed, and human rights based, care, support, and protection.

The 16 Days campaign is a call to action. The OSCE is well placed to heed this call. Our organization is working comprehensively with actors that are key to combat and end sexual and gender-based violence: police, border authorities, armed forces, but also NGOs, service providers and first responders. Through better coordination, data collection and more funding, our organization can make even more of a difference.

Eliminating all forms of gender-based violence is essential to ensure lasting peace and security, and to build strong, resilient, and democratic societies. Today is an opportunity to stand united and reaffirm our commitment to end gender-based violence, empower women and girls in all their diversity and move towards accountability and justice.