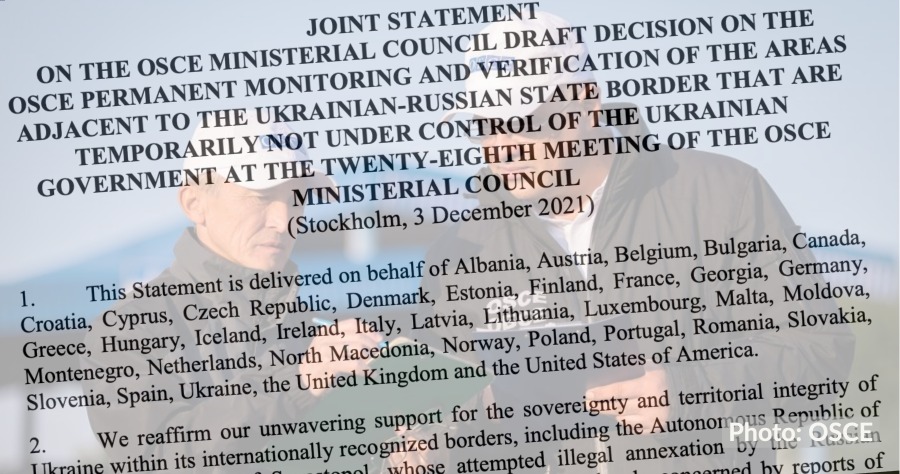 at the OSCE Ministerial Council in Stockholm, Sweden
December 3, 2021

2. We reaffirm our unwavering support for the sovereignty and territorial integrity of Ukraine within its internationally recognized borders, including the Autonomous Republic of Crimea and the city of Sevastopol, whose attempted illegal annexation by the Russian Federation we will never recognize. In this regard, we are deeply concerned by reports of unusual Russian military activity near Ukraine and call for de-escalation. We call on Russia to cease its aggression, observe the ceasefire, fully implement its Minsk commitments, and withdraw its forces from Ukraine’s sovereign territory.

3. We also reaffirm our strong support for the OSCE Special Monitoring Mission to Ukraine (hereinafter, the SMM) and its respective mandate, which provides for the safe and secure access of the SMM throughout Ukraine. This includes all areas adjacent to the Ukrainian-Russian state border that encompasses those areas temporarily not under control of the Ukrainian Government.

4. We recall that the SMM mandate was adopted on March 21, 2014 by the OSCE Permanent Council Decision No 1117, unanimously supported by all 57 participating States, including the Russian Federation.

5. We also recall the Commonly Agreed Conclusions of the Normandy Summit (Paris, 9 December 2019) by the President of the Russian Federation, the President of Ukraine, the President of the French Republic and the Chancellor of the Federal Republic of Germany, in which they underlined that the SMM should be able to use all possibilities of its mandate and have safe and secure access throughout Ukraine in order to fully implement it.

6. We express our deep concern about the chronic restrictions to the SMM’s freedom of movement in the certain areas of Donetsk and Luhansk regions that are temporarily not under control of the Government of Ukraine, especially those adjacent to the internationally recognized Ukrainian-Russian state border, including by persistent strong GPS interference with the Mission’s UAVs fleet.

7. We deeply regret the decision by the Russian Federation not to extend the mandate of the OSCE Border Observer Mission to two Russian checkpoints on the internationally recognized Russian-Ukrainian border for the period after 30 September 2021. We underline that monitoring activities of this OSCE field operation have always been important in terms of wider efforts to build confidence and provide transparency along the segment of the internationally recognized state border between Ukraine and the Russian Federation that is temporarily not under control of the Government of Ukraine.

8. We recall that paragraph 4 of the Minsk Protocol of 5 September 2014, signed by the Russian Federation and Ukraine with facilitation by the OSCE envisages permanent monitoring of the Ukrainian-Russian state border and verification by the OSCE with the establishment of security zones in the border areas of Ukraine and the Russian Federation. We call on the OSCE executive structures to take practical steps to support the implementation of this provision.

9. We call on the OSCE participating States to provide political support for increased SMM presence in the certain areas of Donetsk and Luhansk regions that are temporarily not under control of the Government of Ukraine, especially those adjacent to the internationally recognized Ukrainian-Russian state border. This could be ensured including through the implementation of concrete actions in consultation with the SMM.

10. We emphasize that the establishment of OSCE permanent monitoring and verification of the areas adjacent to the internationally recognized Ukrainian-Russian state border that are temporarily not under control of the Ukrainian Government, needs to remain high on the OSCE’s agenda. Targeted actions to increase transparency along this segment of the border should include opening additional Forward Patrol Bases and Patrol Hubs in these areas; strengthening monitoring activities of the SMM along the state border, including near operational and temporarily closed border checkpoints; and provision of necessary resources to enhance SMM capabilities for effective monitoring in the border areas, including through the use of technical observation equipment, such as, but not limited to cameras, UAVs and satellite imagery.

11. We invite the OSCE Chairpersonship to organise regular consultations, involving representatives of OSCE executive structures, including, but not limited to, TNTD, CPC and the SMM on increasing transparency at the internationally recognized state border between Ukraine and Russia.

12. We call on all participating States, particularly the Russian Federation, to demonstrate a constructive approach in response to efforts aimed at reaching these goals, as envisaged by the joint proposal for the OSCE Ministerial Council Draft Decision that did not reach consensus due to the unconstructive position of one participating State.

13. We reiterate our strong determination to continue working in this regard, so that the draft decision as presented by our countries may be adopted and implemented in the future.