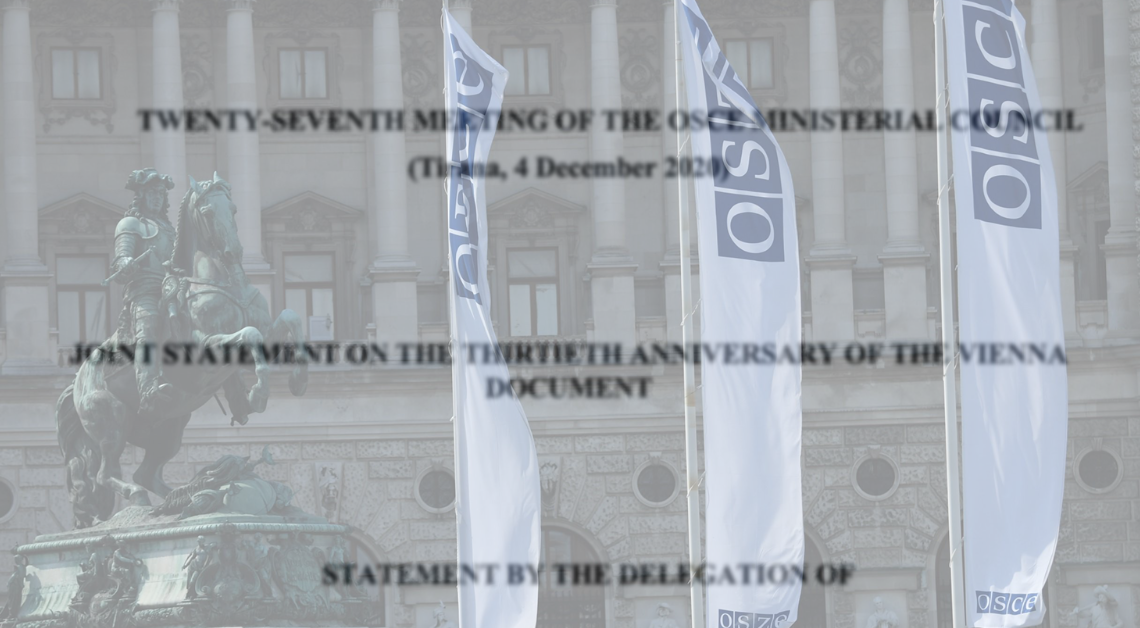 JOINT STATEMENT ON THE THIRTIETH ANNIVERSARY OF THE VIENNA DOCUMENT

Joint Statement on the Thirtieth Anniversary of the Vienna Document

In this year, we celebrate thirty years of Vienna Document implementation in the OSCE area (ever since the adoption of the original version in 1990), and commend the confidence- and security-building measures that have been established so far.

Deeply concerned that the security environment in Europe has deteriorated in recent years and in order to reverse this negative trend, we are determined to contribute to efforts aimed at restoring trust and increasing mutual confidence among the participating States and, in particular, at enhancing reciprocal military transparency and predictability and reducing risk by updating the Vienna Document.

We recall the OSCE documents and commitments that are relevant to the Vienna Document, to its implementation and further development, notably Forum for Security Co-operation (FSC) Decision No. 1/10 on establishing a procedure for incorporating relevant FSC decisions into the Vienna Document (adopted on 19 May 2010), the Astana Commemorative Declaration: Towards a Security Community (adopted on 3 December 2010) and the Hamburg Declaration on the occasion of the 20th anniversary of the OSCE framework for arms control in 2016.

As a key confidence- and security-building measure and a reference point for the Security Dialogues within the FSC, the Vienna Document plays an essential role in promoting military transparency and political stability within the OSCE area.

We welcome the steps already taken and encourage discussions on the measures proposed for improving implementation of the Vienna Document and, in particular, enhancing military-to-military contacts among the participating States at the OSCE, including the High-Level Military Doctrine Seminar that is due to take place on 9 and 10 February 2021.

We also recall the proposals for updating the Vienna Document and encourage all participating States to engage in constructive discussions focused on the Vienna Document’s role in reducing the risks of conflict in the OSCE area by promoting transparency, predictability and stability.

We reaffirm our strong commitment to the Vienna Document and its full implementation in letter and spirit, and are determined to support constructively the process of its modernization with a view to achieving substantial progress toward updating the Vienna Document by the OSCE Ministerial Council 2021.