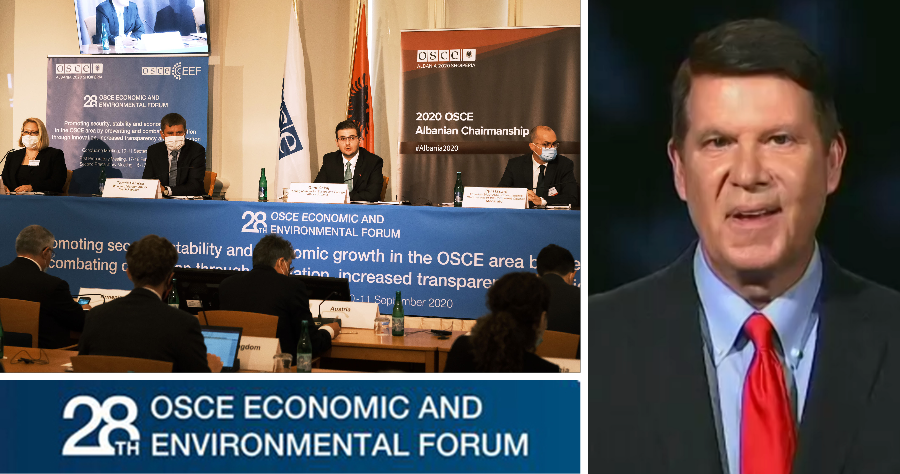 As delivered by Under Secretary of State for Economic Growth, Energy, and the Environment Keith Krach
September 10, 2020

Good morning, delegates, representatives, and distinguished guests.  It’s an honor to address this forum on the topic of corruption.  Fortunately, the United States has a number of powerful mechanisms to combat corrupt practices and malign activities, and we are committed to deploying them in conjunction with our partners and our allies.

The key to fighting corruption is to keep the standard high in terms of who you associate.  If we don’t, then we have automatically lowered the standard for trust.  My 95-year-old mother always says, “you’re known by the company you keep,” and keeping that standard high means only working with firms who uphold basic trust principles, such as transparency, accountability, respect for rule of law, respect for property of all kinds, respect for the sovereignty of nations, and, of course, respect for human rights.  Governments and businesses around the world are increasingly asking: who do we trust?

After this year’s pandemic there is no doubt, it is not the Chinese Communist Party.  Citizens of the world have woken up to their 3Cs strategy of concealment, co-option, and coercion.

Over the last nine months, the world has been struck by what will forever be known as “the great pandemic of 2020” by future generations.  From concealing an outbreak that became a pandemic, to eviscerating Hong Kong’s freedoms, to persisting with a ruthless campaign of repression in Xinjiang, the CCP’s malign actions are impossible to ignore.  Its abuses are made possible by an Orwelian Big Brother surveillance state that tracks billions of people worldwide and extends the great, one-way, China firewall; where all the data comes in for CCP’s use, but none gets out.  And, reciprocally, the propaganda goes out, but the truth doesn’t come in.

It has now led to a 4th C and that is corruption.

Not only has the pandemic created an opportunity for corruption to thrive, it was caused, in large part, by the corrupt practices of the Chinese Communist Party.  As countries were forced to trade safeguards for speed in order to react to the virus, and as trillions of dollars in stimulus were hastily sent around the world, criminal actors and malign regimes saw a golden opportunity.  They bribed, they stole, they even, in China’s case, used forced labor in Xinjiang to produce Personal Protective Equipment, or PPE.

UK Foreign Secretary Rabb recently remarked on the devastation of the pandemic and the crackdown on Hong Kong by saying it comes down to an issue of trust, otherwise, why would anyone trust the CCP?

To create a network of trusted partners, the United States has launched the Clean Network—a comprehensive effort by like-minded countries and companies to address the long-term threats to data privacy, security, human rights, and trusted collaboration.  It is only fitting that I should mention this here in Prague, because the Clean Network is rooted in internationally accepted digital trust principles, such as the Prague Proposals for Secure 5G, and represents the execution of enduring strategy built on a coalition of trusted partners.  The Clean Network includes the 5G Clean Path, whereby countries and companies pledge to use only trusted vendors for their 5G infrastructure, and not use vendors from a country that has a track record of corruption, theft, and being a surveillance state.  And this has sparked a whole new wave of 30 countries and 40 of the world’s biggest telecommunication companies to join the Clean Network.

As developing economies reel from the shock of the China-born virus, they’re also coming to terms with another pandemic, one that will ravage countries participating in the CCP’s One Belt, One Road initiative.  China’s desperate need for raw materials, hard currency, and jobs has found an increase in corruption that attacks these developing nations by siphoning their natural resources, bleeding their financial resources, and devaluing their human resources.

To combat that corruption, the U.S., along with our partners—Japan, Australia, and other nations—have built the Blue Dot Network to promote clean infrastructure.  It is a multi-stakeholder initiative that brings governments, the private sector, and civil society together to invest in global infrastructure built on standards that ensure transparency, financial viability, and environmental and social sustainability.

This is an alternative to the corrupt and predatory financing of China’s Belt and Road Initiative, through which it bribes local officials, coopts developing economies by trapping them in debt, exploits their natural resources, demands collateral in the form of strategic ports and infrastructure, and ships in armies of migrant workers, leading to rampant pollution and even human trafficking of women from these countries back to China.

The Belt and Road Initiative leads me to the other important focus of this year’s forum: preventing the corruption that fuels trafficking of natural resources such as wildlife and timber.  Corruption fuels this illegal trade, which is exploited by organized criminal networks for profit and money laundering.

Trafficking in natural resources such as wildlife, timber, and precious metals and gemstones, as well as crimes associated with illegal, unreported, and unregulated fishing threaten our health and security, erode the business and investment climate, hinder sustainable economic development, and undermine the rule of law.  More can be done in this area—such as tackling public sector corruption in facilitating illegal activities; improving capacity to investigate and prosecute illicit financial flows and money laundering; and addressing the environmental degradation that results from poaching, illegal encroachment into protected areas, resource degradation, and poor governance.

I urge you to consider how the OSCE can assist other international actors in the fight against trafficking, illegal fishing, and corruption of all kinds.

As the United States, we stand ready to cooperate on these critical issues.

We want to see a world clean of corruption in all its forms.  We believe our Clean Network is a pathway to a corruption-free world.  We thank those of you who have already joined, and we welcome the rest of you as you join the Clean Network.

Together, we will start a global movement toward trust, good governance, and the respect for the rule of law.