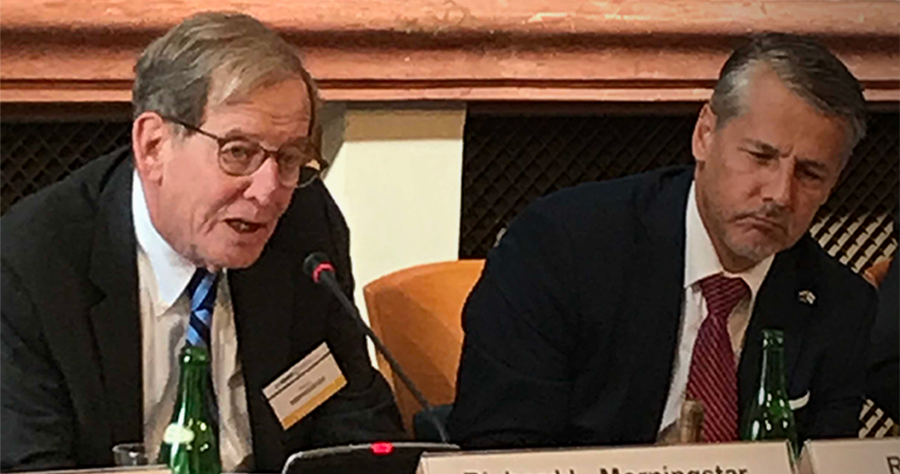 Promoting economic progress and security in the OSCE area through energy co-operation, new technologies, good governance and connectivity in the digital era

As delivered by Ambassador Morningstar, Keynote speaker at the 27th OSCE Economic and Environmental Forum in Prague,
September 12, 2019

Thank you Foreign Minister Petříček, Chairperson-in-Office Lajcak and the OSCE, Ambassador Gilmore and his staff for allowing me to address this forum. It is an opportune time to reflect on the growing confluence between new technologies, digitization, and opportunities for increasing energy connectivity, synchronization, cooperation, and security in the OSCE area. At the end of last year, the OSCE published a “Declaration on the Digital Economy a Driver for Promoting Co-operation, Security and Growth.” As I’m sure you know, the Declaration recognized that, “implications of digital transformation are not only leading to progress and prosperity, but also to the emergence of new or enhanced security threats and challenges.”

This is all the more relevant considering the increasing speed of the global energy transition underway. While the famous Czech energy economist and historian Vaclav Smil maintains that energy transitions necessarily are slow, the evidence, in fact, suggests that though history often repeats itself, rules which once held true may no longer be the case today. And even Professor Smil admits that what is possible on a country or regional scale can be quite impressive, with the right policies and the right technologies.

So yes, it is true that dramatic shifts in energy systems are not the norm, but the exception. But these exceptions seem likely to occur with more regularity, fueled in no small part by the velocity of change introduced by many new technologies, including renewables, advanced nuclear, carbon capture, and digital technologies.

As with so many new technologies and advancements, governing the energy system in the digital era will be all about harvesting the benefits while being mindful of, and mitigating, the new potential risks.

New technologies can have the benefits of enhancing competitive, transparent, and synchronized markets, reducing carbon emissions, and mitigating geopolitical risk by reducing dependence on single resources and single suppliers, but these technologies can also increase the risk of conflict by insufficient cooperation and governance and in particular areas such as cybersecurity.

Let me speak for a bit about how new technologies – both in terms of energy “hardware” as well as energy “software” are generating these new opportunities to be capitalized upon, as well as new challenges to be grappled with.

BENEFITS: The Growth of Clean Energy

CHALLENGES: The Limits of Current Approaches

BENEFITS: The Importance of Digitalization

CHALLENGES: Vulnerabilities and uncertainties in a digital energy era

– Resilience: together we can strengthen our resilience in recovering, responding, and minimizing damage from the cyber-attacks.
– Identifying malign actors: we can better identify where cyber attacks come from and determine where the appropriate response should be.
– It is in the interest of all countries to address these issues and not use cyber as a weapon. Cyber weapons should be considered similarly to kinetic weapons of war.

Cooperation between the United States, Europe and the rest of the OSCE is critical to addressing these issues. At the Atlantic Council, we are working everyday to support and further this cooperation.

Thank you all for hosting me in Prague today. I look forward to the rest of the program.