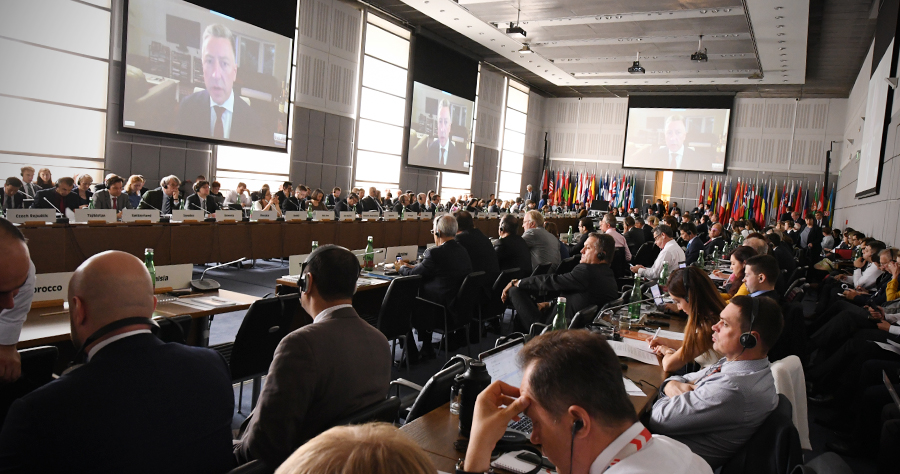 Special Session: Ensuring Security and Stability in the OSCE region in light of developments with respect to Ukraine

Thank you very much, Thomas, it is an honor for me to be here.

Let me thank the Italian Chairmanship and you personally, also, for affording me this opportunity to speak by video. It just was not possible for me to be in Vienna this week, given some other commitments last week, this week, and next week. But I do appreciate the opportunity.

Let me also start by sending a word of appreciation for the work of the OSCE in Ukraine. Particularly Ambassador Sajdik, Ambassador Apakan, and the role of the SMM monitors. This is extraordinarily tedious, tiresome, difficult work. They have a mandate approved by this body – by every single member State of this body – and yet they are inhibited severely in carrying out their functions in the occupied areas of eastern Ukraine. So, it is an extraordinarily difficult job that they are doing, and they do it exceptionally well, so we are very grateful to the OSCE and the monitors.

Second, I’d like to spend a little bit of time just to highlight the humanitarian situation that is taking place right now in eastern Ukraine, just a couple of hours flight from Vienna. I happened to visit there in May – last month – and it is dire and grinding and deteriorating humanitarian situation. You have a situation where over ten thousand people have been killed and, according to the UN, about a million-and-a-half people have been displaced. This is, to my understanding, the largest number of people killed in a war in Europe since the wars in Bosnia and Kosovo in the nineties, and this is the largest number of displaced people from a conflict in Europe, a war in Europe, since World War II. So, it is a grave and extensive crisis.

In addition to that, the lives of the people who are there – and I did meet with many of them – are deteriorating with this conflict going on as long as it has: over four years now. You have 1.2 million people living in food insecurity. You have severe physical challenges to their mobility and movement, including landmines and unexploded ordnance, and dangerous and restricted crossing points from that part of Ukraine to the rest of Ukraine. You have the outbreak of disease, particularly tuberculosis, which does not have in place now a reliable healthcare medical system to deal with it. You have collapse of the economy in eastern Ukraine. You have severe environmental damage, which is affected by everything from the closure of heavy industries, the flooding of mines, the dumping and storage of waste, including some radioactive waste, and this has tremendous long-term implications for the health of the inhabitants there, including implications for the water supply. And you have severe pressure on the water supply through attacks on and around the Donetsk Water Filtration Plant, which, if it were to stop pumping water, would affect over a million people as well. This is an intolerable humanitarian disaster for the people there, and deserves urgent attention and urgent action.

Next point, I want to echo what Thomas Mayr Harting said in his opening remarks, that the principles of the OSCE are extremely important, they remain valid and, quite honestly, if they were being implemented with respect to Ukraine we would not be seeing this humanitarian catastrophe that we are seeing. And I won’t recite all the principles of the Decalogue and of the Helsinki documents, but the key ones are the commitment not to change borders through the use of military force – which Russia has done in Ukraine; to refrain from the threat or use of force – which Russia has done in Ukraine; the principle of non-intervention and the principle that every nation has a right to determine its own orientation, and political and economic and security matters. In particular, I listened with interest to the statement of the Deputy Foreign Minister of Russia, Sasha Grushko, where he was speaking about the presence of Russian forces on the territory of Georgia and Moldova, and now also in Ukraine. And the key principle that I believe was left out is that these are sovereign States, and it is not for Russia to determine whether their forces belong on the territory of these other States or not – it is a matter for those countries to decide.

In the case of Ukraine, what we see here is not an ethnic conflict, it’s not an indigenous conflict that grew up internally, it’s not a civil war, it’s not a conflict between Russians and Ukrainians ethnically. It is a State to State conflict. It is a conflict in which Russia has put its forces onto the territory of Ukraine. It has claimed to annex Crimea – an illegal annexation that I think no one among the States here recognizes. And it has done something similar in eastern Ukraine, but not recognizing the “People’s Republics” of Luhansk and Donetsk as independent States, merely propping them up and using them as entities to prolong the conflict. Given the costs to the local population – and I would stress that this is an entirely ethnic, Russian-speaking population that is affected – it is a terrible burden for those people to bear.

I want to give thanks and our best compliments to France and Germany, because they – through the Normandy process – have done everything possible to try to promote the implementation of the Minsk agreements. The Minsk agreements have all of the content necessary for this conflict to be resolved, for there to be peace, for there to be political steps that will ensure the rights of the population throughout Ukraine, including in this part of Ukraine, and could very well be a solution. However, there has been no progress on the effective implementation of the Minsk agreements in the last four years. This is due largely to a finger-pointing, if you will, to Ukraine saying it has not taken political steps required under Minsk, which are in fact almost impossible for any State to undertake when there is such a situation as an occupation, a lack of security. One example is the holding of local elections. That is required under the Minsk agreements, it is an important step that needs to be take, and yet how can local elections be organized when there is no freedom of movement, no genuine security, no ability to have candidates campaign, and a population where a million-and-a-half people have been displaced and there is no collection of the appropriate voters rolls at the moment? That is something that needs to be done, but it can only be done when there is adequate security in the area.

In order to address that problem, we have proposed – along with France and Germany and Ukraine and others – that there be a deployment of a UN mandated peacekeeping force that would replace the Russian forces and create security in the territory, and hold that territory as necessary in order to create the conditions where the remainder of the Minsk agreements can be fulfilled. And that is the overall goal, it is the implementation of the Minsk agreements. It has not been done in the last four years, but the creation of a secure environment would create a new opportunity to do that. There have been some recent renewed efforts on the part of the Normandy partners to revive that process, the U.S. fully supports those efforts. We have also engaged with our allies in Europe, and we will be having additional engagements with Russia bilaterally as we saw from the presence of the National Security Advisor, John Bolton in Russia this week. We do believe there is a way to solve this conflict, but it starts fundamentally with a decision for peace and for implementation of Minsk in Moscow.