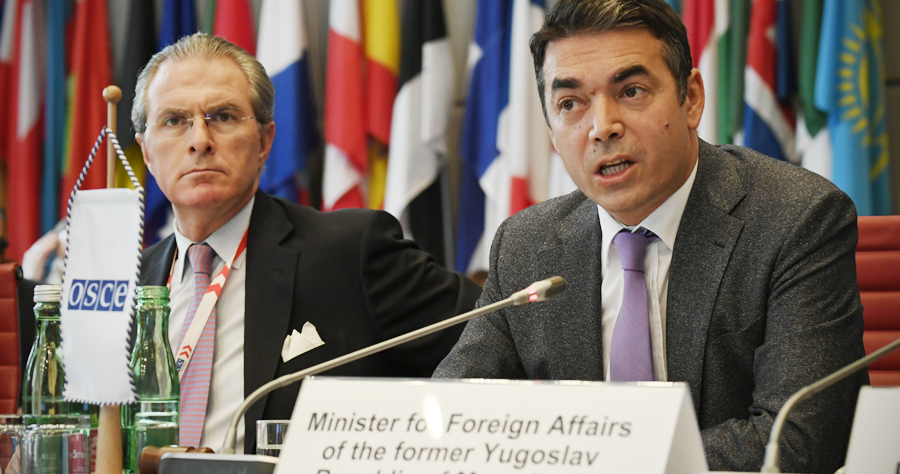 Response to the Foreign Minister of Macedonia, Nikola Dimitrov

Thank you, Mr. Chair.  Mr. Minister, the United States warmly welcomes you to the Permanent Council. Thank you very much for your extensive briefing.

The United States warmly welcomes the new government’s commitment to reforms and its pursuit of a stable, prosperous, and inclusive democracy. As a strategic partner, we support such efforts, and applaud the progress made so far. Foreign Minister, we urge you to continue pursuing reforms to solidify Macedonia’s democratic orientation, regional stability, and Euro-Atlantic integration.

For 25 years the United States has worked with Macedonia in support of its aspirations to join the EU and NATO – aspirations that we strongly support. We urge the new government to implement the reforms necessary to keep the country moving on its path to NATO and EU integration, especially in the areas of rule of law, judicial independence, and media freedom.

As the United States noted last month during the OSCE Human Dimension Implementation Meeting, we remain concerned about limits on media freedom. This includes government interference in media content, intimidation by government officials, and a rise in attacks and harassment. I took note of your commitment just now to a free press, and I agree that a vibrant, free press is a sign of confidence. It’s not something that should be feared. We encourage Macedonia to support greater media freedom in a manner consistent with its OSCE commitments, and we too are looking forward to the big jump in media freedom that you predict we’ll see in the future. More broadly, we encourage economic reforms that focus on providing transparency in government finances, including public enterprises. We also urge your government to pass legislation strengthening the judiciary’s independence, and I welcome your stated commitment to tackle this issue in the future.

Finally, with respect to elections this weekend, the United States encourages Macedonia’s political party leaders to reject any intimidation, fraud, or illegal or abusive behavior by party members, a concern that was cited in ODIHR’s report following last year’s parliamentary elections. As OSCE participating States, we correctly expect this weekend’s elections to proceed in a calm and orderly manner with robust monitoring by international and local observers. We strongly welcome ODIHR election observation mission reports and encourage Macedonia to address their recommendations.

Foreign Minister Dimitrov, thank you again for being here today and sharing your views with the Permanent Council.