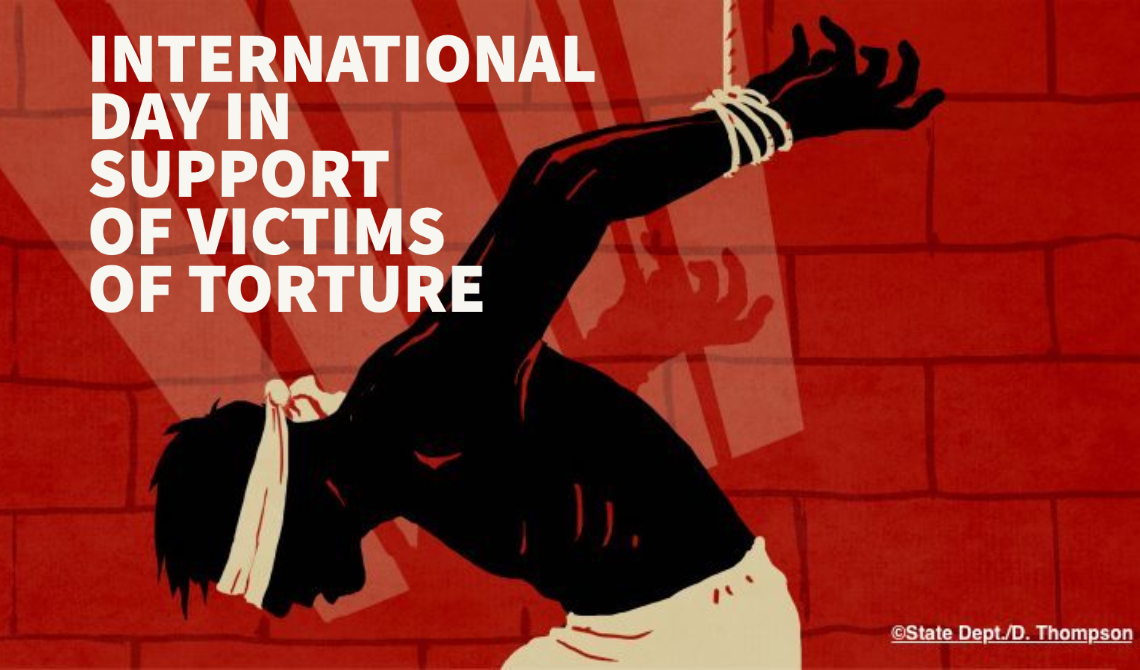 INTERNATIONAL DAY IN SUPPORT OF VICTIMS OF TORTURE

Marking the International Day in Support of Victims of Torture 2021

My delegation was very pleased to join the statement just delivered by my Swiss colleague regarding the International Day in Support of Victims of Torture.  To quote Secretary of State Blinken, “the United States condemns torture wherever and whenever it occurs and strongly urges governments to abide by their international obligations and end impunity…”

Unfortunately, torture persists in this region, often with impunity.  It is no coincidence that the participating States where torture is reported tend to be the same states that detain and incarcerate individuals for simply exercising their human rights.

In Russia’s Republic of Chechnya, law enforcement is frequently implicated in allegations of torture, with related abuses such as abductions, in communicado detention, and enforced disappearances.  Salman Tepsurkayev, the young moderator of an opposition Telegram channel, was abducted last September by persons with connections to Chechen security officials.  He subsequently appeared in a video that showed him under conditions of extreme duress.  His whereabouts remain unknown.  Two and a half years after the Moscow Mechanism Expert Report documented severe abuses against members of the LGBTQI+ community and others in Chechnya, the Russian government has taken no action to stop the abuses and end impunity.  Torture is also reported in other regions of Russia, as well as in the parts of other countries under Russia’s control.  There are horrific reports of torture from inside the notorious Izolyatsia prison in Russia-controlled Donetsk in Ukraine.

The 2020 OSCE Expert Mission report on Belarus chronicled vicious beatings of peaceful protesters and torture of unjustly detained persons.  According to the 2020 Human Rights Report, on August 9-11 security officers physically abused on a systemic scale across the country the majority of the approximately 6,700 persons detained during post-election civil unrest.  Authorities continue to use torture and other forms of severe abuse to obtain false confessions from civil society activists, journalists, and members of the political opposition.

Hundreds of protesters left Belarusian jails with hematomas and required medical attention.  Once free, these victims reported security officials saying they punished detainees so people would never want to protest and return to jail again.  Among those who will never return are Raman Bandarenka who died in November 2020 after injuries suffered in police detention, and Vitold Ashurak who died in a detention facility in May in unclear circumstances.  It is also sickening to watch the televised forced confession of Raman Pratasevich, the journalist who was arrested after Belarusian authorities forcibly diverted his international flight.  Bruising on his face and hands was clearly visible.  Anyone who watched that broadcast witnessed the lawless brutality of the Lukashenka regime.

There are also credible allegations of torture and abuse with impunity in Azerbaijan.  Most mistreatment takes place while detainees are in police custody, where authorities reportedly use abusive methods to coerce confessions and deny detainees access to family, independent lawyers, or independent medical care.

We have credible reports of abuse​, torture, ​and summary executions of soldiers and civilians taken into custody during the 2020 fighting in and around Nagorno-Karabakh between Armenia and Azerbaijan.

Regarding Turkey, credible reports continue of security forces’ serious abuse and mistreatment of peaceful protesters and detainees, as do allegations of torture in prisons.

In recent statements in this Council, my delegation urged OSCE field offices to continue their work on the ongoing problem of torture reported in the Kyrgyz Republic and Kazakhstan.  We also encouraged OSCE efforts in Turkmenistan to promote prison reform and emphasized the importance of resolving the longstanding problem of enforced disappearances.  In the Kyrgyz Republic, Tajikistan, Turkmenistan, and Uzbekistan we remain concerned by reports of torture and other forms of coercion to extract confessions.  In Uzbekistan, we urge authorities to fully investigate the death last year of prisoner Farrukh Khidirov after penal colony officials beat and burned him with boiling water.

We also mark the anniversary of the death of Azimjon Askarov, a prominent human rights defender from the Kyrgyz Republic and recipient of the State Department’s Human Rights Award.  The UN Human Rights Committee concluded that Mr. Askarov was arbitrarily detained, held in inhumane conditions, tortured, and otherwise mistreated without redress.  While serving a draconian prison term, his health seriously deteriorated.  Here in this Council, the United States repeatedly called for his release on humanitarian grounds.  Unfortunately, Mr. Askarov died in prison a year ago July 25, aged 69.

Madam Chair, the United States will not waver in its commitment to combat torture and we will continue to demand that those who practice and perpetuate it are held accountable.