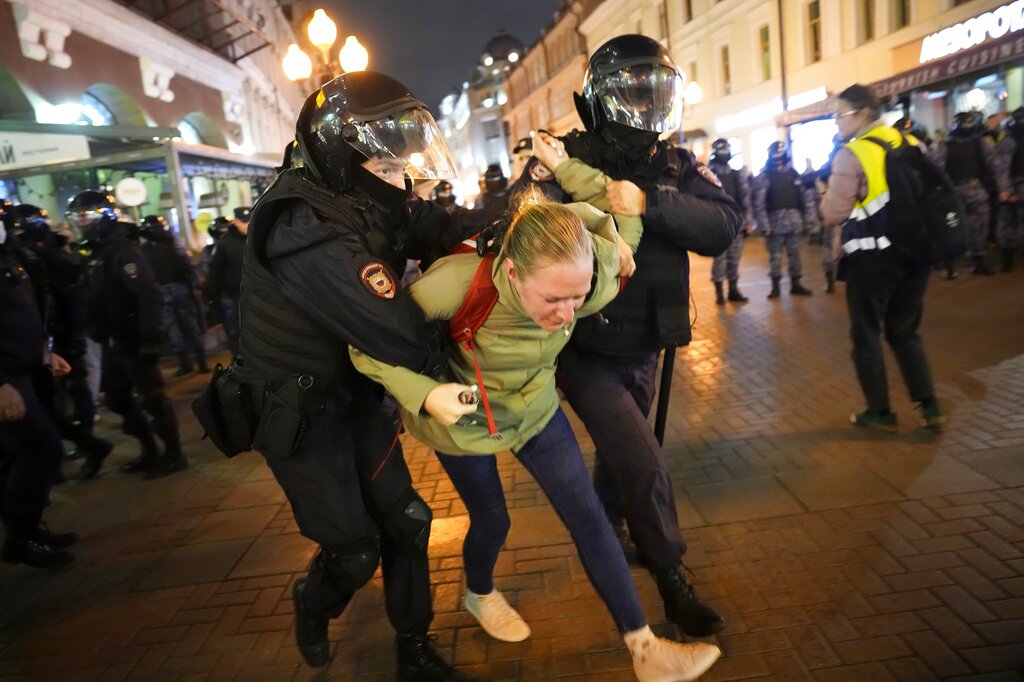 Riot police detain a demonstrator during a protest against mobilization, in Moscow, Russia. (AP Photo/Alexander Zemlianichenko)

Thank you, Professor Nußberger, for your presentation and for your very comprehensive report.  Your report documents the Putin regime’s wide-ranging and sustained attack on the human rights and fundamental freedoms of the people of Russia.  Understanding the Kremlin’s relentless repression of civil society, independent media, peaceful dissent, and honest discourse at home is vital to understanding why the regime believed it could get away with launching an unjustified and unprovoked war against its neighbor abroad.  As you noted in your report, and has been quoted already by several colleagues “repression on the inside and war on the outside are connected to each other as if in a communicating tube” (page 120).  In other words, repression at home and aggression abroad are two sides of the same coin.

This report effectively summarizes the terrible cost of a decade of legislative attacks on human rights in Russia under what can only be described as a police state.  Under the guise of so-called “reforms,” the Russian government has dramatically limited the space for Russia’s civil society to function and all-but criminalized partnerships with foreign actors, including journalists and human rights defenders, effectively as you say “cutting [them] off from foreign and international partners, suppressing independent initiatives, stifling critical attitudes towards the authorities, silencing the media, and suppressing political opposition” (page 1).

You noted just now in your report that the Russian state seeks to grow and control civil society.  I hope the irony is not lost on everyone in this room because of course the definition of civil society is all those independent structures, organizations, and institutions that are precisely independent of the state.  Any effort to get rid of civil society entirely is commonly known as totalitarianism. I hope that comes across.

The report notes the Russian constitution claims human rights are “the highest values to be protected by the State” (page 13).  Yet, the Russian state has trampled the Russian constitution, as democracy defenders Boris Nemtsov, Aleksey Navalny, Vladimir Kara-Murza, and so many others have pointed out over the years.  Indeed, the report notes the distribution of power both on the federal level and between the center and the regions “considerably changed” (page 14) to serve the Kremlin’s so-called “vertical of power.”  The report also notes with concern that over the past decade the Kremlin has centralized federal and regional law enforcement agencies under President Putin’s direct control (page 19).

With regard to the judiciary, the report documents changes to the constitution since 2020 that allow “direct interference by the head of the executive in the exercise of constitutional jurisdiction” (page 19).  Shockingly, as a result of these so-called reforms, judges are prohibited from “publishing dissenting or concurring options” (page 20).  If judges are not even allowed to publish dissenting opinions, it is clear the Putin regime has given up even attempting to maintain the veneer of an independent judiciary.

The report provides valuable detail on the so-called foreign agent legislation introduced in 2012 which has become more draconian with each passing year.  With the latest rounds of changes since July 2022, anyone can be labeled a “person under foreign influence” as a result of any association with non-Russian persons and organizations (page 28 and 32).  Anyone who fails to submit the required byzantine paperwork faces a sentence of up to five years in prison (page 33).  This is a system in which, as the saying goes, “for my friends everything, for my enemies the law.” In other words, lawfare.

The report notes that these foreign agent prohibitions are “so comprehensive that they render participation in State affairs and public life more or less impossible” (page 35).  The report notes that “from the very outset, the ideas behind this legislation are incompatible with international human [rights] standards and thus with Russia’s OSCE commitments.”

The report also notes these laws were used to bring charges against people like Vladimir Kara-Murza for allegedly organizing a conference in Moscow with a banned NGO (page 42).  Yesterday, we heard from Vladimir’s wife, Evgenia Kara-Murza right here in the Hofburg as she described the completely unjustifiable lengths the Kremlin has gone to try to silence her husband’s independent voice.  Vladimir Kara-Murza today faces 15 years in prison simply for speaking the truth.

The Moscow Mechanism report shares the concerns expressed by many international organizations as well as the OSCE Representative on Freedom of the Media “regarding the lack of clarity of the legislation,” and notes the individual cases where the law was applied show its “increased potential for arbitrariness, especially with regard to organized political dissent” (page 43).

Since Russia launched its full-scale invasion against Ukraine in February of this year, the report notes that Russian authorities have sought a “monopolization of truth” (page 49) or as you just put it, military-style censorship.  Russian authorities introduced severe financial penalties and up to fifteen years in prison for discrediting the Russian Armed Forces or referring to Russia’s actions as a “war” rather than a “special military operation.”  In other words, criminalizing the truth.  The report notes that as of June 2022, more than 100 cases have been prosecuted resulting in sentences of various lengths (page 47).  Due to the vague and broad language of these regulations, it is difficult to predict which acts trigger criminal liability.

The report concludes that “such restrictions carrying severe penalties are aimed at suppressing the exercise of freedom of expression offline and online completely, and notes that “Such restrictions reducing freedom of expression to zero… are neither necessary nor proportionate and lead to a huge chilling effect” (page 49-50).  The report notes that these measures are “instrumentalized and politically motivated …to silence dissenting voices,” and have led to a “total information blackout on the war, not allowing civil society any space for freedom of expression” (That’s on page 50 of the report).

The report goes into great detail on how Russian authorities use legislation on extremism to “target potential or real political opponents” (page 58).  Harsher punishments and an extensive application of extremist legislation since 2021, especially since February of this year coinciding with the  full-scale invasion of Ukraine, have had a “significant chilling effect on Russian civil society as a whole” (page 63).  The report concurred with the International Federation of Human Rights finding that this legislation is “incompatible with freedom of expression as outlined in Article 19 of the Covenant on Civil and Political Rights and Article 10 of the European Convention on Human Rights” (page 66).

Regarding Russia’s legislation on “propaganda of non-traditional sexual relationships,” the report cited the European Court of Human Rights ruling that by adopting such laws the authorities “reinforce stigma and prejudice and encourage homophobia, which is incompatible with the notions of equality, pluralism and tolerance inherent in a democratic society” (page 73).

The report notes how the ‘vague and overbroad’ terms of the State security legislation are used to target journalists and researchers in particular” (page 71).

Regarding independent mass media, the report notes that since Russia’s full-scale invasion of Ukraine earlier this year, the remaining independent media outlets in Russia Novaya Gazeta, TV Dozhd, and Echo Moskvy radio have all but been forced to cease operations, depriving Russian citizens of facts about the war (page 83).  This has led to a “State monopoly on information in the Russian Federation” (page 85).

The report similarly highlights Russian authorities’ severe restrictions on peaceful assembly.  The St. Petersburg Ombudsman even admitted in 2016 that the authorities who “are required to approve the notifications for public events, time and time again reject them on made-up pretexts” (page 97).  The report notes that while Russian authorities removed all COVID-19 restrictions in May 2022, the ban on public assemblies remains in force, constituting a “disproportionate and arbitrary restriction of the right to peaceful assembly” (page 106).  The report determined that implementation of this legislation is “incompatible with the OSCE commitments and international standards in this area” (page 107).

Russia continues to deny its citizens the right to peacefully assemble even as we sit here today.  In fact, according to public reports, following President Putin’s mobilization order yesterday, Russian security forces have arrested over 1,300 people protesting against mobilization in 39 cities across Russia.  At least 542 people were detained in Moscow and 479 people in St. Petersburg.  In addition to denying Russian citizens their right to assembly, arrested protesters shockingly reported receiving draft notices for mobilization during their detention.

Colleagues, as this report has extensively documented, Russia’s legislation is “obsessed with restricting…rights more and more” (page 107).  Russia’s laws on “foreign agents,” “State secrets,” “extremism,” “terrorism,” “homosexual propaganda,” and “war speech,” use “extremely vague and broad terms for which it is impossible to predict how they will be interpreted.”  Therefore, the report found that “Russian legislation in this area is clearly incompatible with the rule of law….” (page 107-8).

The report effectively documents Russia’s willful and systematic failure to fulfill its OSCE commitments in the human dimension.  We call on Russia to follow the report’s recommendations and “commit to uphold the provisions of the Russian constitution which unconditionally guarantee freedom of expression, assembly, and association” (page 122).  Regarding the legislation on so called “foreign agents,” we call on Russia to follow the report’s recommendation that the Presidential Council on the Development of Civil Society and Human Rights carry out a “critical assessment of the short- and long-term consequences for civil society in Russia in light of the provisions of the Russian constitution and the international standards by which the Russian Federation is bound” (page 122).  Finally, we call on Russia to release all political prisoners, including Aleksey Navalny, Vladimir Kara-Murza, and Yevgeny Roizman, and many, many others and stop its relentless attacks on dissidents and ordinary citizens who dare to express their opinions.

Let me be clear, this report is a clear documentation of the Kremlin’s contempt for the OSCE commitments it freely adopted.  The Kremlin is denying its citizens the ability to peacefully assemble, associate, and exercise freedom of speech.  Is it any wonder that appalling decisions affecting the security of this region are being made by an atrophied, morally corrupt, cruel, and ill-informed government?  And yet, as Robert Kennedy once wrote, “Every dictatorship has ultimately strangled in the web of repression it wove for its own people, making mistakes that could not be corrected because criticism was prohibited.”