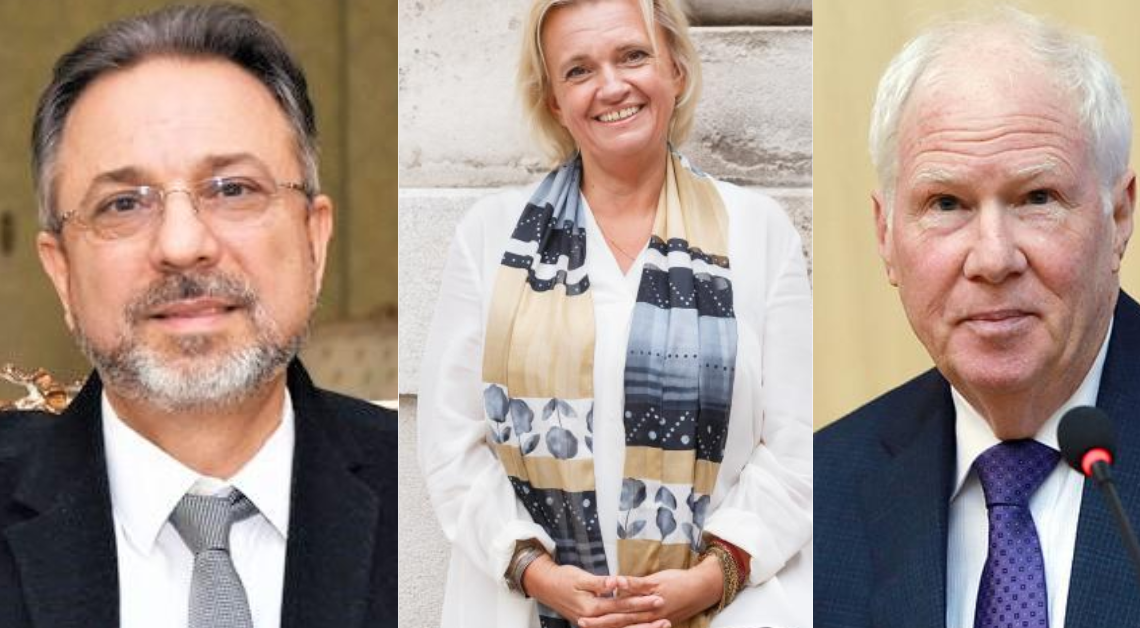 OSCE Personal Representatives of the OSCE Chairperson-in-Office on Combatting Discrimination and Promoting Tolerance.

The United States welcomes to the Permanent Council the Chair-in-Office’s Personal Representatives on Tolerance and Non-Discrimination: Rabbi Andrew Baker, Ambassador Mehmet Paçacı, and Professor Regina Polak.  Thank you for joining us today.

The Helsinki Final Act commits us to respect the “inherent dignity of the human person.”  The United States strongly condemns crimes motivated by hatred and intolerance.  No one should fear they might become the target of crime because of who they are, how they look, what they believe, how they worship, or who they love.

Unfortunately, antisemitism continues to increase at an alarming rate across the OSCE region and is often a bellwether for broader intolerance and prejudice against any community or individual perceived as “different” or “other.”  We recall the 2004 Berlin Document stating that antisemitism and intolerance as a whole threaten democracy, cultural values, and our collective security.  Antisemitism is an age-old hatred, but it constantly evolves and is deliberately propagated by both state and non-state actors, who misuse new technologies to spread their hateful narratives with unprecedented speed and reach, targeting Jewish persons, places of worship, and property as well as distorting or denying the facts of the Holocaust.  During the pandemic, outrageous conspiracy theories have proliferated online, falsely blaming Jews for creating, deliberately spreading, and profiting from COVID-19.  No country is immune from antisemitism, including my own.  We call on all participating States that have not yet done so to embrace the International Holocaust Remembrance Alliance Working Definition of Antisemitism, inclusive of its examples.  The working definition is an important tool that helps us identify antisemitism in all its forms so we can effectively combat it.

We condemn discrimination and violence against Muslims.  Across the OSCE region, the rise of anti-Muslim hatred is often linked with racism, anti-immigrant and refugee sentiment, xenophobia, and other intolerances. We must do more to combat these hatreds and discrimination in our countries.

Governments across the OSCE region impose undue limitations on religious freedom, often under a pretext of combating the coronavirus pandemic, or protecting national security, or countering “extremism.”

Across the OSCE region, we have seen disgraceful and dangerous narratives falsely blaming persons of Asian descent, Jews, Roma, and migrants for the pandemic and violent attacks against them.

More must be done to prevent and deter human rights violations and abuses, including hate crimes, against Lesbian, Gay, Bisexual, Transgender, Queer and Intersex (LGBTQI) persons.  Such actions should roundly be condemned, and hate crimes should be fully investigated and those responsible for organizing, inciting, or perpetrating them held accountable.  We reject assertions from any participating State that OSCE principles and commitments on respect for human rights and the inherent dignity of the human being do not apply to members of this community.  All individuals are equal in rights and dignity.

The United States rigorously prosecutes hate crimes.  Swift responses to hate crimes send the signal they are unacceptable against anyone, anytime, anywhere.  We urge all participating States to collect and share with ODIHR’s Hate Crimes Unit disaggregated data on the incidents of hate crimes, which helps decision-makers formulate more effective responses.

We note with concern that Roma and Sinti and persons of African descent continue to be targets of hate and racial discrimination in our region.  We strongly support the International Holocaust Remembrance Alliance’s working definition of Anti-Roma Discrimination/Antigypsyism, inclusive of its examples, and the definition’s application in practice by all participating States.  As President Biden said on the first anniversary of the killing of George Floyd:  “The United States is committed to fully addressing racial injustice and inequities in our country, and we stand firm as a voice for defending human rights and promoting accountability worldwide.  The international outcry after George Floyd’s murder revived a global movement for racial justice and equity.  This fight is not ours alone, and in this effort we seek to partner with like-minded countries and civil society stakeholders across the international community.”

The United States was disappointed to see participating States were yet again unable to support a strong Decision on Enhancing Efforts to Address Intolerance and Discrimination in this past Ministerial.  You can be assured that the United States will continue to support efforts to achieve consensus on this issue.  Addressing challenges related to protecting human rights and combatting intolerance and discrimination remains a top priority for the United States.  We are committed to working with the OSCE, governments, businesses, faith communities, and civil society groups across the region to condemn and combat all forms of hatred and promote respect for the  human rights of all.