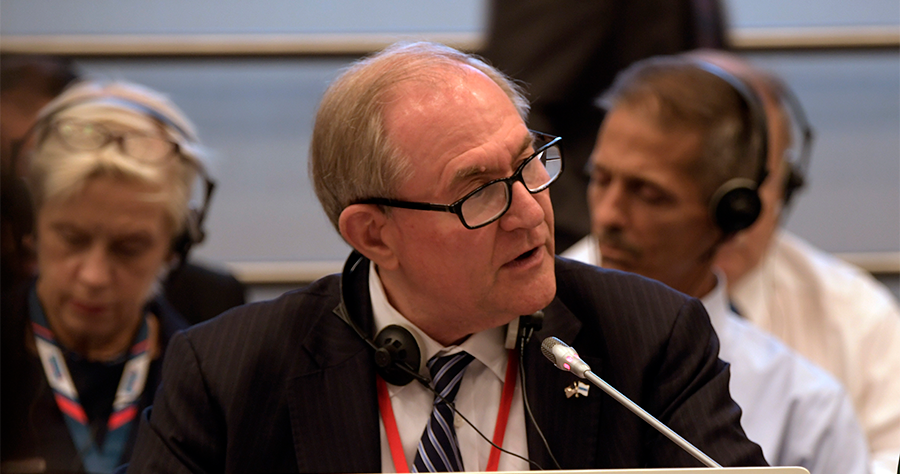 Thank you very much, Madam Chairperson.

The United States welcomes to the Permanent Council the Chairmanship-in-Office’s Personal Representatives on Tolerance and Non-Discrimination: Rabbi Andrew Baker and Ambassador Mehmet Paçacı, thank you for coming to speak with us today. Although we wish Professor Ingeborg Gabriel could have joined us in person, we are grateful to her for sharing her report via video message.

The Helsinki Final Act commits us to respect the inherent dignity of the human person. The United States strongly condemns crimes motivated by hatred and intolerance. No one should ever fear they will be attacked or otherwise become the target of crime because of who they are, what they believe, how they worship, or whom they love.

Across the OSCE region, anti-Semitic violence is on the rise. This past October marked the anniversary of the deadliest anti-Semitic attack in U.S. history at the Tree of Life synagogue in Pittsburgh, Pennsylvania.

We recall the 2004 Berlin Document stating that anti-Semitism and intolerance as a whole threaten democracy, cultural values, and our collective security. Anti-Semitism does not persist solely as an age-old menace on the margins of our societies. It constantly evolves and is deliberately propagated by both state and non-state actors, and though new technologies with unprecedented speed and reach—against Jewish persons, places of worship, and property. We all must reject anti-Semitism in its age-old and contemporary manifestations and stand together against intolerance in all of its forms.

Anti-Semitism often serves as a bellwether for a rising tide of intolerance and prejudice against any community or individual perceived as “different” or “other.” The United States supported the Office for Democratic Institutions and Human Rights’ Words into Action program, which addressed the security needs of Jewish communities, countered anti-Semitism through education, and fostered coalition-building among communities. We are pleased that ODIHR has launched a new “Programme for Combating Hate Crimes,” which will build on and widen these efforts to address other manifestations of intolerance in addition to anti-Semitism.

Other forms of intolerance are also on the rise. Anti-Islamic rhetoric equating all Muslims with terrorists has contributed to steep increases in discrimination and violence. Governments across the OSCE region impose undue limitations on religious practices, often under the pretext of countering “extremism.” Governments also prohibit religious communities from building mosques or community centers, restrict Muslim religious prayer, and imprison followers of “non-traditional” Islam. These practices are inconsistent with OSCE commitments on religious freedom and tolerance.

More must be done to prevent and deter human rights violations and abuses against persons on the basis of their sexual orientation, gender identity or expression, or sex characteristics. Hate crimes of this nature should be condemned, investigated, and prosecuted. We reject assertions from any participating State that OSCE principles and commitments on respect for human rights and the inherent dignity of the human being do not apply to members of this community. All persons are equal in rights and dignity.

We note with concern that persons of African descent and Roma/Sinti continue to be targets of hate across the OSCE region. The United States encourages the OSCE to do more to combat racial discrimination by harnessing the strength of its institutional experts. We welcome your ideas on how we can strengthen our actions with this goal in mind.

The United States rigorously prosecutes hate crimes. I have seen it myself in the courtrooms, federal and state. Swift responses to hate crimes send the signal they are unacceptable against anyone, anytime, anywhere. The U.S. will be prepared to examine our own issues, but we will not hesitate to examine that of other countries as well. We collect disaggregated data for such crimes, which helps decision-makers formulate more effective responses. We strongly urge all OSCE states to collect and share disaggregated data with the Hate Crimes Unit at ODIHR.

The United States remains committed to working with the OSCE, governments, businesses, faith communities, and civil society groups across the region to condemn and combat all forms of hatred and promote respect for the human rights of all.