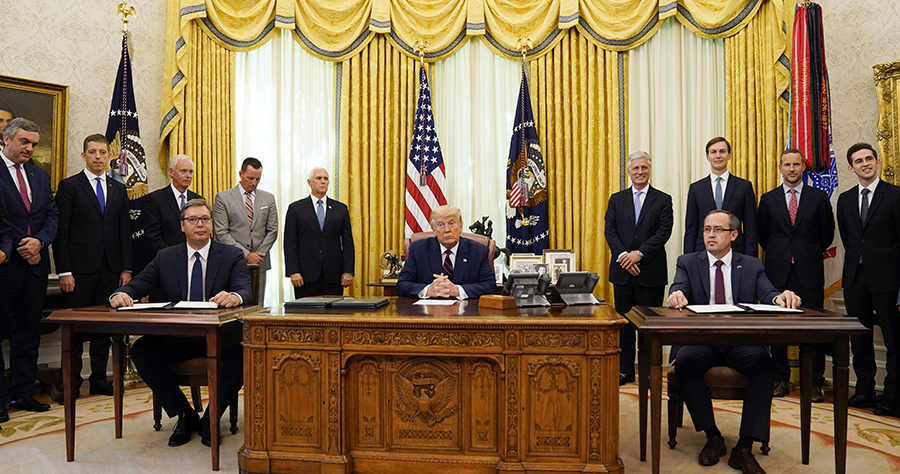 On Economic Normalization Between Kosovo and Serbia

I want to be quite brief.  The United States wants to bring to the attention of the Permanent Council the developments that are going on this week between Serbia and Kosovo.  Everyone here knows the importance that is attached to the Western Balkans by the OSCE, including the able and distinguished leadership of Albania from the Western Balkans. The new development is something we wish to highlight today. We want to highlight the historic agreements on Serbia-Kosovo economic normalization, that was reached at the White House this past week.  We applaud President Vucic and Prime Minister Hoti’s courageous and forward-looking leadership in bridging a long-standing divide to benefit both countries.  We welcome their commitment to implementing the agreement, which will facilitate needed economic growth and bring jobs to the citizens of Serbia and Kosovo.  I would also like to take a moment to note the truly historic nature of this agreement which took President Trump’s innovative and personal diplomatic push to look for creative ways to bring the two sides together after years of negotiations. President Trump changed the sequencing of the approach and focused on the economics first, believing tangible economic benefits are a prerequisite for progress on challenging political issues.

In addition to economic normalization, we celebrate Serbia and Kosovo’s steps towards enhancing peace in the Middle East.

Serbia announced its intent to open a commercial office and ministry of state office in Jerusalem by September 20, 2020, and to open its Embassy in Jerusalem by July 2021.  Continuing momentum on this historic Abraham Accords, Israel and Kosovo also agreed to normalize relations, and Kosovo expressed its intent to open an Embassy in Jerusalem.  These bold steps are going to enhance peace among our partners in Europe and in the Middle East.

Beyond the economic aspects of these agreements, they symbolize a new era of reconciliation and peaceful cooperation for the Western Balkans and hope for the younger generation who are yearning for a brighter economic future which these agreements will help broker.  Security, stability, peace, and prosperity throughout the Western Balkans remain important objectives for the United States.  The September 4 agreements demonstrate shared prosperity will result from increased cooperation between Belgrade and Pristina.  We hope the agreements also will provide to be forerunners of a new push for reconciliation in the Western Balkans.  The United States reaffirms our support for the ongoing negotiations between Serbia and Kosovo toward comprehensive normalization of relations.  The agreements provide momentum for the EU-facilitated Dialogue talks between Serbia and Kosovo, aimed at a comprehensive normalization agreement, by increasing cooperation and confidence building between the parties.

Once again, we commend President Vucic and Prime Minister Hoti on their strong leadership in reaching these agreements. This is an important development within the OSCE’s space.